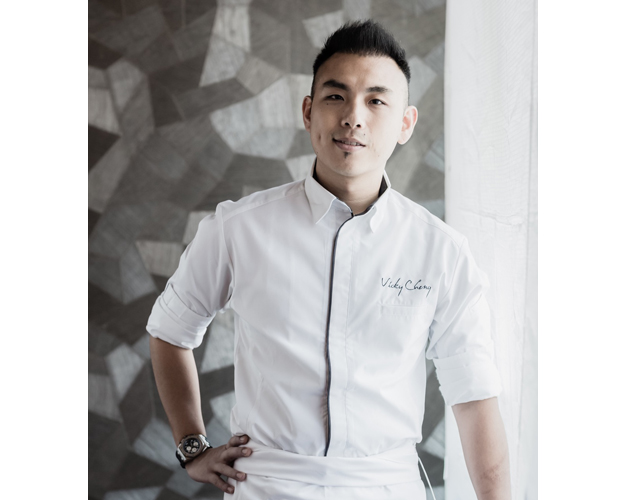 Where to eat in Hong Kong? Why not start with a Hong Kong-born, Toronto-raised chef Vicky Cheng’s VEA restaurant and lounge.

The 30th floor restaurant on Hong Kong Island is a model of precision, teamwork and, yes, great taste. When I visited, Chef Vicky Cheng was just about to do his nightly huddle with the team. It’s all on display—and it’s done on purpose.

His cooking roots run deep, starting in Toronto, where he moved to attend high school. But he wanted to be in a kitchen. He took an unpaid co-op placement at Auberge du Pommier, one of the Toronto’s top restaurants. After George Brown College, the award-winning chef also worked with world-renowned Daniel Boulud in New York before returning to Hong Kong, and it’s here that he honed his Chinese X French style of cuisine.

At VEA, every single one of the 25 counter-style seats in the house faces the kitchen. Cheng and his team are always “on”, almost in a theatrical sense. Nothing is hidden, everything is demonstrated. You watch the team cook, and then the team watches you eat what they’ve created. Everyone in your party is served in unison, like an orchestra playing to the audience.

The menu is set and, more interestingly, Cheng’s executive mixologist Antonio Lai pairs each course with a cocktail. Of course, wine is available, but there’s something a little fun and subversive with cocktail and food pairings.

And the food! Each course is a work of art, featuring seasonal inspiration—and perhaps a bit of Vicky’s Canadian connections. When I was there, he served the first course with a sprinkling of autumnal maple leaves. Gorgeous.

When Chef Cheng came back to his old stomping grounds of Toronto earlier this year, we had the chance to catch him live. Here, our interview with VEA’s Chef Vicky Cheng.

If you travel to Hong Kong: www.discoverhongkong.com/ca/index.jsp