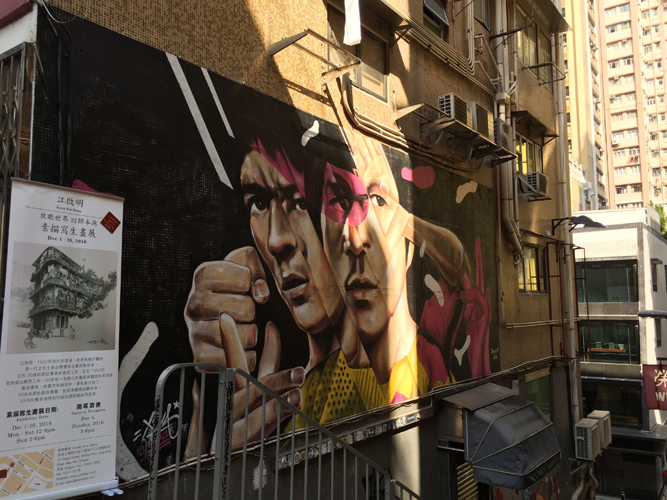 Best of Hong Kong: Studying The Art of Kung Fu

Enter the Dragon: How to channel your inner grasshopper in Hong Kong.

In the bustling Kowloon neighbourhood of Mong Kok, there are polar opposites: Newer hotel hotspots like the Cordis, for example, which, as a conduit to this once working class neighbourhood, has helped gentrify the area. It draws guests with its art collections and multiple dining options, and then introduces them, via local tours, to the more traditional street-level action: The markets, from gold fish to flowers to the ladies’ market, which have Hong Kong citizens and tourists alike flocking to on a daily basis to do their shopping.

There is another tradition here in Mong Kok. Kung Fu. Not just any Kung Fu, but Wing Chun Kuen, a type of martial arts that was developed by Wu Mei, a nun at the Shaolin Temple in China during the latter years of the Qing Dynasty. Her philosophy stemmed from size, not strength. Working with a woman’s smaller physique, she created a defense that capitalized on our more diminutive nature. It is close-quarters combat—almost in your face—easily disarming for someone even twice your size or weight. Hands fly like a fan, blocking, grabbing, pulling; almost slapping. Yes, in this instance it’s kind of cool to fight like a girl.

But generations later, it was not a woman that made this form of Kung Fu famous: It was Bruce Lee, the Hollywood star who brought martial arts to the big screen. He studied with Grandmaster Yip Man in Hong Kong, considered the premier teacher of the art. Man had received the training first hand from disciples of Wu Mei; he, in turn, taught Lee as a teenager, in the mid-1950s. Lee was already a child star in Hong Kong filmdom, but had suffered at the hands of bullies. His slight build suited the style perfectly, and Lee began to eclipse even his masters. This put Lee at a new risk: one, to be shunned by his seniors, or have to challenge them; and two, because it was found out that Lee’s mother was half German, he was suddenly a Westerner that should not be trained in the art. Necessity is, after all, the mother of invention, and Lee went on to develop his own inimitable style, Jeet Kune Do, but never forgot the positive influence of Yip Man on his life. Now, a few more generations later, a woman is again learning Wing Chun: That woman would be me. The Cordis hotel has kindly arranged a class for me, as I’ve expressed an interest in finding my inner grasshopper. As a kid, I had seen the popular ’70s TV show Kung Fu, starring David Carradine, as a mixed-race orphan of American and Chinese parentage, who is taken in at a Shaolin Monastery. He trains as a priest and a martial arts expert and goes on to be a do-gooder of sorts in the American West. In a bizarre, only-in-Canada plot twist, Lee’s widow Linda Caldwell maintained that Lee had revealed a very similar idea for a TV show pilot to Pierre Berton on his eponymous interview show just a year prior to Kung Fu’s debut. Berton and Lee went on to discuss the difficulties of a Chinese protagonist on an American show. Prescient stuff. Not so prescient, however, is my ability to anticipate my Sifu, or instructor’s, moves. He is Sam Lau, and he, like Lee, is a first generation disciple of Yip Man. He also went on to be Man’s assistant instructor. Three times a week, Lau holds a five-hour class that includes instruction in Wing Chun self defense, lunch (Man and Lee preferred dim sum), a trek to see the statue of Bruce Lee in Tsim Sha Tsui East and a visit to the Hong Kong Heritage Museum, where there is a permanent exhibit in honour Lee’s life. Lau is the only disciple of Yip Man in Hong Kong.

He’s standing arm’s length; he starts to move and motions for me to attack. His hands are open, palms inward, elbows bent, blocking my advances at the wrist. My turn to block; I’m getting the rhythm of it, the motions are becoming more fluid. I can add in the odd grab of his wrist to stop it or pull him toward me to take him off balance, putting him within my own (short) arm’s length to deliver a blow to his chest. It goes on for what seems like an hour, and I become almost hypnotized by the fluidity of the motions. I get visions of “wax on, wax off” from the Karate Kid, and we burst into laughter. He’s OK with my momentary lapse of silliness, and joins me in the laugh. That’s good, he says, stopping me, finally. But that was only the first move, he adds.

Alas, my time with the master is up, but not before he tells me I could be good at Wing Chun Kung Fu, if I could only stop giggling mid-way through the lessons. He’s serious. Suddenly, I realise the gravity of what he’s saying. The man who trained with the same sifu as Bruce Lee believes in me. I can channel my inner grasshopper.