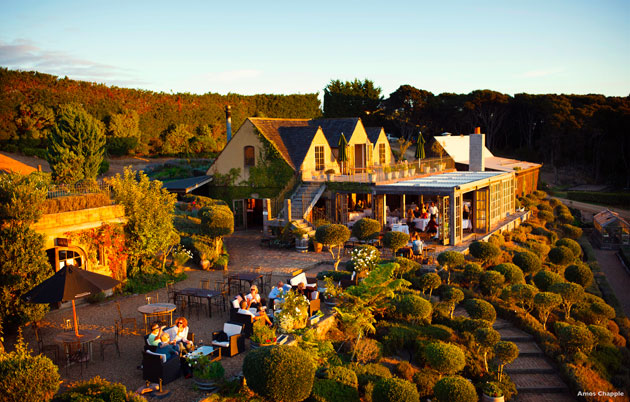 Eva Longoria chose to have lunch at Mudbrick on Waiheke Island, New Zealand

Where to Eat Like a Celebrity in New Zealand

Where do the celebrities and royalty eat when they’re in New Zealand? We’ve got the answers. We love way down under. We have a certain kinship with our Kiwi cousins, from the Commonwealth to living next door to a much larger neighbour, whether in population (like Canada to the U.S.A) or a much larger landmass (like New Zealand to Australia). And, when asked to tell us where you want to go next, you told us that New Zealand is definitely on your bucket lists.

We also share a great love of food, wine and coffee, too. With that thought, we asked our friends in New Zealand to give us the insider scoop on where the world’s hottest stars dine out when they visit the Pacific nation.

This just in: Celebrities and foodies alike will be flocking to Pacifica – the Hawke’s Bay restaurant named the best restaurant in the country in New Zealand’s most prestigious restaurant awards. The 2017 Cuisine Good Food Awards showcase the best New Zealand has to offer. Located on the east coast of the North Island, at Pacifica, the celebrated Maori chef, Jeremy Rameka, combines Michelin-quality cooking with a casual Kiwi atmosphere, which you’ll find in a weathered wooden bungalow. Think dishes like pan-seared sesame crusted trevally with squid mince and green-lipped mussel sago.

There are plenty of ways you, too, can enjoy the culinary delights to be found there, as the country is also host to plenty of food festivals, year-round. Here, a bit of a teaser: With fresh, farm-to-table produce, innovative chefs and some stunning restaurant settings, it’s no surprise that international celebrities love dining in New Zealand.

From pop star Taylor Swift to action man Jason Statham, click through to discover the favourite foodie haunts of visiting celebrities, according to our star gazers in way down under, and a list of food festivals where you can satiate your own culinary cravings. If it’s more casual fare you’re after, make like Jason Statham, the Hollywood actor who was spotted, above, at El Sizzling Chorizo, the Argentinian barbecue joint in Ponsonby Central, the food hub in the heart of Auckland’s coolest suburb. Think Argentinian classics: empanadas, lomitos (steak sandwiches) and delicious barbecued potatoes.

Perhaps it’s the old-world charm and understated elegance, maybe it’s the incredibly delicious food… whatever it is, whenever celebs are in Auckland, they make a beeline for Cibo. This award-winning restaurant has served Mariah Carey, Mick Jagger, and models Tyra Banks and Elle MacPherson. Here, the floor staff radiate professionalism, the food is upmarket and inventive, and the décor opulent, yet fun.

Not far from Cibo, housed in a lovely leafy building, is Antoine’s, which has hosted many international celebrities since it opened in 1972: from President Bill Clinton to entertainers Elton John, George Benson and Rod Stewart – all at one table. This formal dining establishment features classics such as ox tongue, simmered in Madeira sauce. It’s not surprising that when actress Eva Longoria and pop star Taylor Swift visited Auckland, they chose to have lunch at Mudbrick on Waiheke Island, above. From the rustic gravel driveway to the romantic, vine-covered restaurant, entering the vineyard is like stumbling on a Tuscan dream in the middle of a Kiwi paradise.

Getting to Waiheke by air was British comedian Stephen Fry’s transport of choice, when he hopped on a seaplane so that he could enjoy lunch at The Oyster Inn, the luxury boutique hotel and restaurant located in the heart of Waiheke’s shopping and eating precinct, Oneroa. To really get a feel for the capital’s famously vibrant culture, make like the cast of The Lord of the Rings and The Hobbit and head to Matterhorn, above. Since 1963, this Wellington institution has attracted celebrities, keen to soak up the supper club’s laidback spirit. Others simply come for the live music.

Peter Jackson and Scarlett Johansson are regulars at Coco at the Roxy. The ultimate film-lover’s hangout, Coco offers everything from appies to cocktails to a three-course meal – and you can catch a film afterwards at the Roxy Cinema.

Cast of Ghost in the Shell were seen enjoying the seafood at Ortega Fish Shack, Crabshack and Dockside. Prince Charles and Camilla travelled to Nelson to sample the region’s renowned food and wine when they visited New Zealand. The couple headed to Mahana Estate, an organic vineyard and winery with spectacular views, above. The 25-hectare property also boasts luxury accommodation, its stunning mid-century modern villa built with sweeping perspectives over Tasman Bay, picturesque Mt. Arthur and the snow-capped Southern Alps.

Nelson also played host to the stars of The Lord of the Rings and The Hobbit, who were spotted at the Boat Shed Café, the popular restaurant with the best sea views in the area. The distinctive white building is set out over the water and serves plenty of seafood.