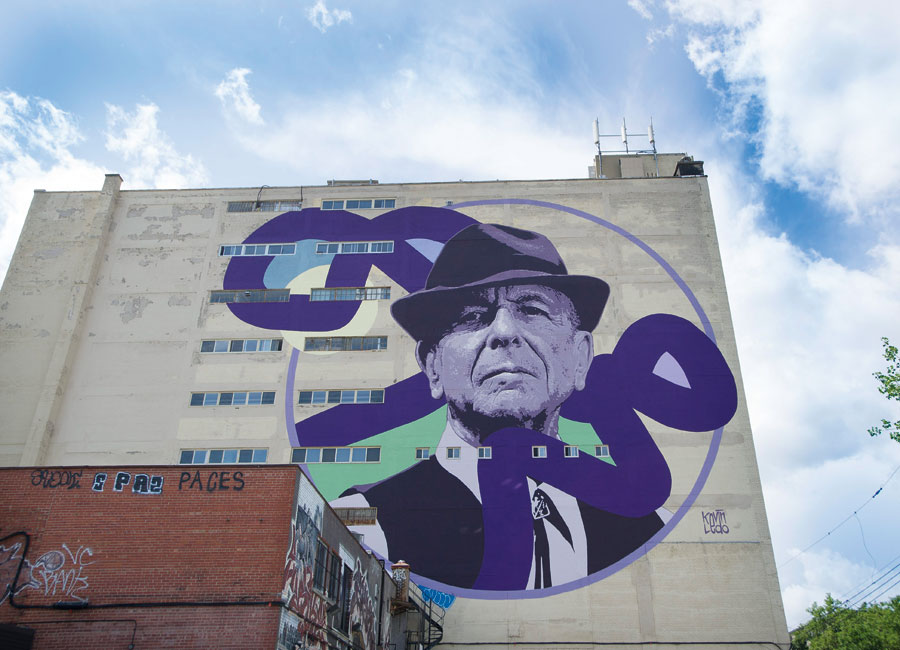 A whirlwind visit to Montreal gives Arlene Stacey a taste for its Jewish history—and memories of Leonard.

Growing up outside of Toronto in the ’50s and ’60s, the closest I came to smoked meat was a soggy Wonder bread sandwich filled with chewy Coorsh smoked meat boil-in-a-bag. A special treat, we thought at the time.

Fifty years later, I’ve learned that was blasphemy: real Montreal smoked meat has bite, flavour and leaves memories that not all smoked meat is created equal.

I’m in Montreal for a food tour: a taste of Jewish Montreal. And as a Leonard Cohen fan since I first read Beautiful Losers in the late ’60s (his second and last novel before he began a rather successful career as a singer-songwriter), I can’t believe I’m in his hometown, which at the time was on the first anniversary of his death – unfortunately, a few days too late for the star-studded tribute concert, Tower of Song, which featured artists such as Sting, k.d. lang and Elvis Costello paying homage to Cohen’s work, but everyone here is still talking about it. And fans like me still visit Parc du Portugal across from his home off Saint-Laurent, where I’m looking at his house as I read the words to “Titles” from his Book of Longing: “From a third-storey window/above the Parc du Portugal/I’ve watched the snow/come down all day/As usual there’s no one here/There never is.” But there were people holding vigils in that very park for several days after his passing.

Even now, a year later, the words to “Hallelujah” are stencilled on the sidewalk around Parc du Portugal. Someone has altered the sign on the north-east corner where rue Marie-Anne crosses Saint-Dominique, posting “So Long” above Marie-Anne and another below reading “And Leonard” – a reference to the passing of Marianne Ihlen, Leonard’s muse and inspiration for his famous song, who passed away in 2016. Two blocks south is Kevin Ledo’s nine-storey-high mural of the man, a centrepiece of the fifth annual Mural International Public Art Festival – Leonard keeping a benevolent eye on his neighbourhood.

Cohen’s deli of choice – the old-school Main Deli on Saint-Laurent just blocks from his home – satisfied some of his cravings, and it’s our first stop for smoked meat. But it isn’t the smoked meat that blows me away: it’s the latkes. The biggest, fattest potato “pancakes” I’ve ever tasted. I expect a good latke to be crispy, crunchy – but thick and almost fluffy? Latkes are simply grated potatoes and onions, seasoned with salt and pepper, bound with egg before being fried in oil. But here, the latkes are truly over the top. Is it because the recipe and the woman who makes them have not changed in more than 30 years? Or perhaps – the only hint I find in the recipe I requested – the latkes are finished over a charcoal fire. Something I can’t do at home.

The smoked meat at the Main is delectable. But I had read Mordecai Richler’s take on the offerings at Schwartz’s across the street: a “maddening aphrodisiac.” So what’s the truth about Montreal’s smoked meat? And what is more Jewish – or more Montreal – than smoked meat, bagels and dill pickles?
Let’s start with the pickles. Zev Moses, executive director of the Museum of Jewish Montreal in the heart of the Plateau, takes us on a walking tour down the Main, the spine of the city, which symbolically divides the city – English Protestants to the west, French Catholics to the east and immigrants in between: Eastern European Jews, Chinese, Italians, Arabs, Greeks and so many more, for more than a century.

Along the way, he points out a 1920s building with tiles along the facade emblazoned with a fleur-de-lis, a Scotch thistle, a maple leaf, the Star of David – the pedigree of the city – and past the 1880s vaudeville Yiddish Globe Theatre, now Cinéma L’Amour, a porn house. We turn right and right again and into an alley, where Moses hands each of us a plastic-wrapped dill pickle. With Moses describing how immigrants struggled upon their arrival in overcrowded conditions in these cold-water flats surrounding us, we munch on his pickle offering. He points to a six-foot-high fence bordering the alley, behind which Esther Witenoff started Mrs. Whyte’s pickle-making business in 1892 – the original brine kosher dill, the very pickle we’re crunching down on as Moses continues his story. I usually pass on soggy dill pickles, but the crispness of this one – brined, not pickled in vinegar – sends tingles down my tongue and my salivary glands into overtime. Probably why brined pickles are a perfect match with Montreal’s spicy smoked meat.

We’re back at the Museum of Jewish Montreal, a small storefront space on the Main, which Moses started in 2010 to share the Jewish experiences in the community. The museum offers exhibits, workshops and cooking classes serving modern takes on Jewish flavours: influences from North African Jewish immigrants with almond flour; Moroccan cookies with cardamom and rosewater – prepared by The Wandering Chew (brainchild of Kat Romanov, Jewish food historian and director of food programming at the museum). Taste the samples on the counter, then vote on your favourite: gefilte fish club sandwich versus gefilte fish tacos. This is a museum like no other.

Mélissa Simard, our city guide the next day, from Round Table Food Tours, has set the challenge: define what perfection means in a city that knows its smoked meat and its bagels. She proposes a throwdown of two of the city’s famous smoked meat delis – Lester’s versus Schwartz’s – and two of the best bagel bakeries – St-Viateur versus Fairmount. The challenge is on.

But first, let’s explain: while New York City tries to battle it out with Montreal on smoked meat, there’s not much of a fight. NYC’s pastrami, a heavily fat-marbled cut from the navel end of the brisket, is dry-cured with sugar and salt, then seasoned, smoked and steamed. Montreal’s variable-fat brisket is brined and cured with more pepper and more savoury flavourings than its New York cousin – stuff like coriander and mustard seeds – and a lot less sugar (and never pickled), then hot smoked and steamed to perfection. But even in the city of Montreal, there are showdowns among the delis.

Lester’s Deli is our meeting place, and no one wants to leave. This 60-year-old institution could be a movie set: photos of the Beatles among other celebrities, all of whom we have fun trying to identify. It’s charming and friendly, the kind of place you want to settle in and spend a few hours. Sybil Lester, who runs the deli, is the daughter of the original Lester, and we’re told that Leonard Cohen was a regular. The smoked meat at Lester’s is juicy with a sharp bite, piled high on light seedless rye and mouth-watering.

The challenger: the famous Schwartz’s, the Montreal Hebrew Delicatessen, still serving the recipe from 1928: 10-day curing and the effect of its 80-year-old brick smoke house. But the more-than-an-hour lineup to get inside is daunting, so we hit the take-out side. The choices are the same as the restaurant: lean, medium, medium-fat or fat. I choose medium but then I stay classic and include a half-sour pickle (not as crunchy as Mrs. Whyte’s) and a black cherry soda. Schwartz cuts its smoked meat against the grain, so it’s more crumbly than others, and the fizz of the soda against the bite of the smoked meat is delectable.

As with the smoked meat, Montreal and NYC battle it out like gladiators over bagels, ever since they were first popularized by Polish immigrants (Ashkenazi Jews) in the early 20th century. As the website thrillist.com so eloquently puts it: “Montreal bagels, on the whole, are slightly smaller than their American brethren, and thinner where the New York bagels are fat (kinda like the difference between Canadian and American people).” But for Americans, “Accoutrements are king – and there’s just more room for them on a New York-style,” which are soft, chewy and doughy. While New York likes to smear on the schmear, crispy Montreal bagels, with eggs and honey in the dough, then boiled in honey water before being baked in a wood-fired oven, can be eaten out of hand as you walk the streets. No need of a schmear.

We hit the original St-Viateur Bagel Shop, a Montreal tradition since the 1950s. This small operation – the first location – stays open 24 hours a day, seven days a week, ever since one of its employees offered to stay until the last of the day’s bagels were sold. The enticing aroma of bagels baking in a wood oven has you salivating from the street, and inside it’s packed as you watch the bakers cut, form and boil the delectables before sliding them into the wood ovens.

Bagels in hand, we head out again to test St-Viateur against Fairmount, another hand-rolled honey-water boiled bagel. Before we even get to the bakery, the aroma of wood fire fills the air. As the first bagel bakery in Montreal, the Fairmount opened in 1919 and, although it has changed locations, it is still small – like, really small. Isadore Shlafman ran the business on the ground floor, and he and his family lived upstairs. Today, I’m so full and the shop so crowded with customers, I wait outside while my friends venture in. The warm bagel they bring me is good – very, very good. Mélissa’s throwdown on bagels and smoked meat in Montreal is hugely challenging – we couldn’t reach a consensus on either.

I’m embarrassed to admit that first night in Montreal, I sat in Leonard Cohen’s usual spot at the Main Deli (second booth against the wall – just ask Anastasia Xemos, a server there for 23 years) and took my first selfie. But, worse than that, I would hate to explain to him in the hereafter why I brought home a pound of Lester’s in a vacuum-sealed bag and cooked it up for my partner. Served warm and slathered with yellow mustard on seedless rye bread, I could almost convince him we were in Montreal.

A version of this article appeared in the May 2018 issue with the headline, “Noshing on the Main,” p. 74.