Exploring Montreal’s Local Culture One Latte at a Time 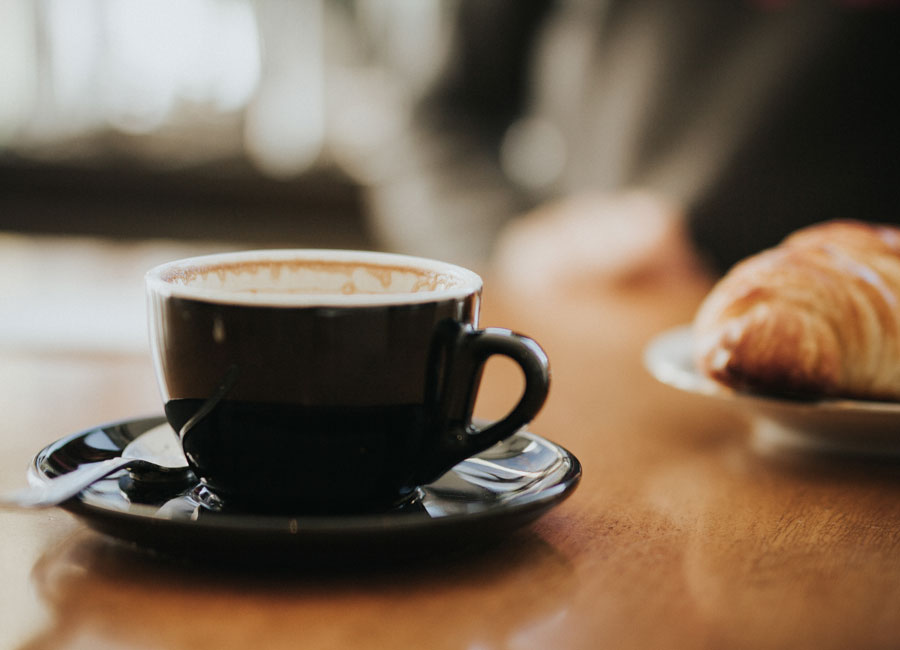 On the city’s east side, two almost neighbouring old-style coffee shops with Italian roots, each with its own fiercely loyal customers, exemplify local life at its best.

Ever since living in Paris, cafés have been essential to me. After moving there from Toronto in 1979, cafés figured prominently in my expatriate life. Living next to the Marais in a tiny, poorly heated studio on the seventh floor with no elevator, cafés became my second home.

My favourite ones served multiple purposes. They were my living room, workplace and daily perch from which to observe Parisian life and satisfy my caffeine cravings. Each was an oasis of comfort and solace from the city’s attrition. Each was an outpost where I could take stock, see friends, have meetings, lose myself in reverie, read newspapers and edit articles for Paris Passion, the magazine I started in 1981.

Since then, my reality has changed considerably but not my penchant for cafés that exude life and offer a window into local culture.

Every morning in Montreal, on Rue St. Viateur in the hip Mile End neighbourhood, Taras Grescoe arrives at Café Club Social for coffee and a human connection. At around the same time, 50 yards to the east on the same side of the street, Paul de Tourreil enters Café Olimpico for a similar reason. After years of this daily ritual, both writers are fixtures in their respective haunts where staff know them and their choice of coffee well. Neither Grescoe nor de Tourreil would ever think of changing places.

Club Social doesn’t look like much from the outside. Nor the inside. But once past the transom, it’s hard not to feel comfortable due to its unpretentious, slightly disheveled décor and convivial atmosphere. The café seats about 60 inside and another 45 on the adjoining outdoor terrace.

Jay Lucifero is one of five brothers behind Club Social. True to its name, he’s a great socializer and loves facilitating contact between people. His warm, gregarious manner – in French, English and Italian – make him well suited for the job. As there are no waiters, Jay and one of his brothers prepare the coffee in front of customers at the wooden bar, engaging in friendly banter with both regulars and first-timers. As most order lattes, the whir of the overworked coffee machine is near incessant.

From the moment I discovered Club Social, it intrigued me. I loved the ambience and the easy interaction between people. The more I learned about it, the more the place fascinated me, both for what it is and the appealing side of Montreal it reflects.

For all of Social’s popularity, Café Olimpico commands a similar allegiance among its habitués. It’s no less a revered institution in the area, with an equally rich history as a family business with Italian roots. Framed photos from the café’s early days and flags of Italian soccer teams dominate the walls. It’s animated and loud, in part due to the baristas who sing, laugh and shout greetings to customers.

With their welcoming nature and francophone, anglophone and multi-ethnic customers interacting so harmoniously — both cafés exemplify Montreal at its best. As most people — customers and employees — in both places seem genuinely happy to be there, a positive feeling reigns.

The success of Social and Olimpico and their close proximity to each other mirror the two legendary bagel shops nearby that have long divided Montrealers into opposite camps – those who swear by the bagels from Fairmont and those who’ll only buy them at St. Viateur. Just like in Paris where people patronize either Café de Flore or Deux Magots and never the twain shall meet.

In 2009, a Montreal newspaper published an article about Social and Olimpico titled La Guerre des Cafés, as if there was a war between them. There’s not. While the two may compete for business, they have much mutual respect and affinity.

“Most people who come to Club Social are very loyal to it,” says Olga Kavalieratos, 50, a native Montrealer and a regular since 2003. “I’ve been to Olimpico a few times in my life but only when a friend insisted on going there. Each time, I felt as if I was betraying Club Social.”

Giuseppe Sacchetti knows Olimpico well, being a regular since 2004. He’s never been to Club Social.

“I’ve always loved Olimpico,” says Sacchetti, 32, who opened a health food eatery across the street in 2016. “Perhaps because of my Italian background, I enjoy the Italian café bar aspect of it and how it brings people together.”

Both Social and Olimpico are an antithesis of Starbucks, sharing many attributes – a street corner location; sun-kissed terraces; acclaimed latte served in glasses; a passion for soccer; a cash-only payment policy; an ill-disposition to patrons using laptops on the premises; a laissez-faire attitude to customers bringing in food to eat with their coffee; and a two-thirds francophone, one-third anglophone crowd.

The major differences are Olimpico is larger (seating about 80 inside) while Social serves alcohol in the evening.

People rarely speak with any ill-feeling about the rival café they don’t patronize. Most seem loyal to one café, a stranger to the other. Sonia Bluteau, 45, a communication executive, is a rare exception.

“Ever since I moved to the nearby Le Plateau area in 2012, I go to both cafés,” says Bluteau. “It depends on how busy they are. When the weather’s nice, I love sitting outside on their terraces. Both have excellent coffee. I’ve met great people at both, including some who became friends. I can’t think of another place in Montreal where you find this type of people. Both cafés are so reflective of Mile End, which is what attracts me to them.”

One of Montreal’s trendiest neighborhoods, Mile End is a somewhat bohemian, multicultural low-rise area that has long attracted writers, artists, designers, musicians, and filmmakers. It oozes with charm, which contributed to its gentrification over the past 25 years and now is considered one of Canada’s hipster capitals. It’s also home to videogame giant Ubisoft that employs 2,600 people, many of whom frequent Olimpico and Social.

Both cafés have a rich heritage, each created by Italian immigrants before eventually being passed on to the next generation. Olimpico is the older of the two.

In 1970, after operating a pizzeria for 10 years, Rocco Furfaro opened an Italian bar, naming it after a soccer team in Italy. Initially, it attracted mostly cigarette-smoking Italian immigrant men, who enjoyed playing cards, using the pool and foosball tables and watching soccer games on TV. Eventually, women started to frequent it and some of the Italian customers moved out of the neighborhood.

“This isn’t simply a business or a job for me,” says Rocco’s daughter Vicky Furfaro, 55, who owns and operates Olimpico and whose son is now involved in it. “It’s a community. I need to continue what my father started. We have an amazing clientele, many of whom have been with us for years, just like most of my staff.”

Down the street at Club Social, today’s reality is a far cry from how it started in 1982 as a private social club for Italian immigrants. In 1984, board members gave it to Vincenzo Lucifero who immigrated to Canada in 1960. It took on its present incarnation in 1990 when Vincenzo’s son Franco refurbished the place and opened to the public.

Franco’s brother Jay began working there in 1995 and is the one most associated with the café.

“There’s no mystery behind our success,” says Jay, 60, dressed in a white T-shirt and jeans. “We make Club Social like an extension of our living room. We love that many people consider this a second home. It means a lot to me they keep coming back here. It’s certainly not just because of the coffee.”

Sarah Bartok moved to Montreal in 2010 from Vancouver where she lived for six years after living in Calgary. A radio broadcaster who moved to Toronto last year, she frequented Club Social at least once a day while based in Montreal.

“What makes Club Social such a great place are the people,” says Bartok, 44. “You can strike up a conversation with anybody. It’s so relaxed. That has a lot to do with Jay who talks with everybody. He makes sure everyone meets and helps make it such a welcoming environment.”

Non-fiction writer Taras Grescoe lives near Social which he’s frequented since 1998. He’s often there twice a day, ordering a dry macchiato. The café has played a big role in his life. It’s where he met his wife and has edited several of his books including his most recent one, Shanghai Grand, in which he cites Social and the Lucifero brothers in the acknowledgements.

” I love that Club Social is a genuine neighborhood place,” says Grescoe, 50. “The lack of attitude and snobbishness of the brothers who run Social make it so appealing. Their warmth is not a commercial attribute, it’s their temperament.”

Paul de Toureil, 47, a writer who has lived in Mile End for the past 20 years feels similarly about his café. “I love the atmosphere at Olimpico,” he says. “It’s human and warm. The genius of this place is its consistency. It doesn’t change. One day I was amazed when I learned many people come here from miles away.”

In both cafés, things become more intense when there’s a major sporting event, especially if it’s a soccer game that attracts a full house. Both have multiple flatscreen TVs on the walls, usually tuned to a sports channel.

Such is the appeal of these cafés that many visitors to Montreal include them on their itinerary.

“We discovered Olimpico by accident the first time we came to Montreal three years ago,” says Sokratis Vsakilesivis, 31, a Masters student in Toronto. Since then, he and his girlfriend come to Olimpico when in town. “We can’t find anything like this in Toronto. The vibe here is different. There’s a great energy from both the staff and the customers and we love the coffee.”

Several times a year, my wife and I travel to Montreal from Toronto. We always go to Social or Olimpico where we’ve made friends who we meet for coffee. Being at either one makes us almost forget we’re out-of-towners, which is the ultimate compliment. We still can’t agree on whose coffee is better.