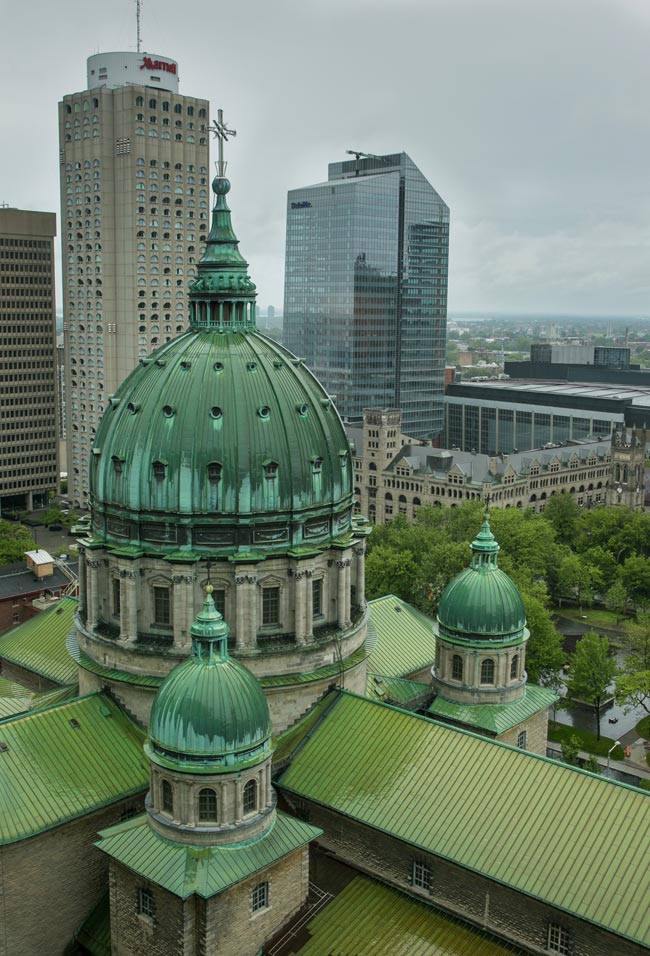 Mary, Queen of the World Cathedral is viewed on a rainy day from the Fairmont Queen Elizabeth Hotel on June 28, 2015 in Montreal, Quebec, Canada. (Photo by George Rose/Getty Images)

There’s a lot of good about the new multi-year renovation to one of Canada’s most culturally significant hotels, but the best one is almost certainly something that’s as old as the hotel itself (which turned 60 on April 15).

When you get off the train (because why would you not take the train to Montreal?), you walk to the station’s Premier Moison, get pretty much anything they bake and then keep on walking, through the sliding glass doors marked Fairmont and take the grandly crested elevator to reception, check in and settle into your room. This is great in Montreal’s notoriously blustery winters, of course, but it was just as good last weekend when the city was in the mid-teens and lovely as only Montreal gets in the first bursts of spring.

It’s like Via Rail, a crown corporation that uses the massive rail infrastructure that sewed this country together 133 years ago is using its entire heft to deliver you right to your cosy elevated Fairmont bed with those long, long wrap-around-your-head-to-block-out-the-world pillows.

I missed the anniversary tours they offered on the 15th (foolishly having booked a flight during an ice storm), but I got a reasonable facsimile and so saw the new co-working rooms on the third floor, with pool tables and foozball, wall-screen teleconferencing and pilates balls, even some swings, everything you might need for the modern break-out session. The fact that it was all very Google 2016 doesn’t matter too much yet; sure, it may date poorly, but at the moment, Google 2016 is pretty cool.

The hallways are still wide, and the rooms still pretty small, but that’s what you expect from these old railway hotels. And where once the top floor was used for storage, Sid Lee has liberated the views and made the 21st floor into an event space with its own terrace, and the lounge for the Gold floors, where you pay an extra $100 or so for free breakfast and bigger bottles of Le Labo creams and unguents. It seems to be the place to be: I had breakfast there my first morning and bumped into Jean Chrétien in front of the toaster. He says bonjour.

The rest of the best is on the ground floor, where five entrances seek to open the hotel as much as possible to locals. Noémie Moretti, the event manager who subbed in as my tour guide, told me the main space was designed to be a sort of main street. It is certainly wide, but when the walls are slid shut, as they were my entire stay, for private functions in the rooms that line it, it can be a bit of a dead zone.

That is, until you get to the grocery store.

It’s become a thing, little roc shops in hotels, mostly the high-design, low-amenity spots like Alt and Aloft (and 25 Hours and Citizen M in Europe). But Fairmont’s leapfrogged them with Artisans. Though you’re greeted by a table piled with exquisite little pastilles from France, the store specialized in local goods, some of them very local, like the bitters and tinctures and other flavours made across the hall at the house bar, Nacarat. Artisans is a full-on, full-sized, high-end grocery store, with a butchers counter, pretty produce, baked goods from the hotel’s pastry chef. Guests can charge things to their rooms, but it also draws in a lot of people from the surrounding office towers for its prepared foods and various delicacies. With everything from broccoli heads to little bottles of maple sugar, the store is well pitched for its entire clientele and really livens up the hotel, especially in the morning, when it’s joined by Kréma café across the hall, where guests can also charge their cappuccinos to their rooms, but where the majority of the sippers are obviously local business folks and laptoppers.

One of the downsides of many hotels is the transient nature of its population and the fact that if you meet anyone at all, it’s likely to be someone from somewhere else. But these main street efforts ensure that Le Reine Elizabeth continues to be woven into Montreal’s urban fabric, continuing a tradition that has seen it house 10 NHL drafts, host the provincial government during the FLQ Crisis and be the go-to stay for anyone who’s making a movie or giving a concert.

Or trying to change the world.

Part of the tour included the renovated Ono and Lennon suite, room 1742, where the couple had their 1969 bed-in and recorded “Give Peace a Chance.” It’s a glorious 20th-century cultural vector, and Fairmont has really played it up, adding an extra room, reproducing some of the ad-hoc window decorations the couple put up for the cameras that heady week and even produced a VR vignette involving a housekeeper you can watch on a set of goggles by the bedside. With that added room and all the new decor (including a wall-size faux filing cabinet whose drawers open up onto bits of newsreel from the time), it’s no longer the room Yoko and John stayed in. But it is nice.

There are various weirdnesses and infelicities, too. Like the room service plates and covers that seal together on a regular enough basis that when I called down to say I couldn’t break into my salmon filet, they knew exactly what I was talking about and sent someone up to bang it on a table in just the right way to release the fish. The bar, Nacarat, is a decor nightmare, like some multi-headed creature gobbled up the ’70s, ’80s and ’90s and vomited up this example of extreme eclecticism that already looks about four years out of date. (The signature cocktail I had there, a semi-gelid squid ink concoction served in a gold-dusted tulip glass was remarkable, though.) Where once there were free drinks in the Gold lounge, it is now an hour bar where the vodka, at $14, costs more than it does in your room (where it’s $12.50).

But the service is friendly and fast, the hotel is in easy walking distance of Old Montreal and St. Catherine Street, and the view of the dome of Mary Queen of the World can’t be beat. There are cooler and even more elegant hotels in the old port, but there is nothing in Montreal as redoubtable as Le Reine. And when you check out, you get back in that same elevator, walk into the grand hall of the Central Station, and then down to your train. I couldn’t love it any more.