Gallivanting in the Galapagos 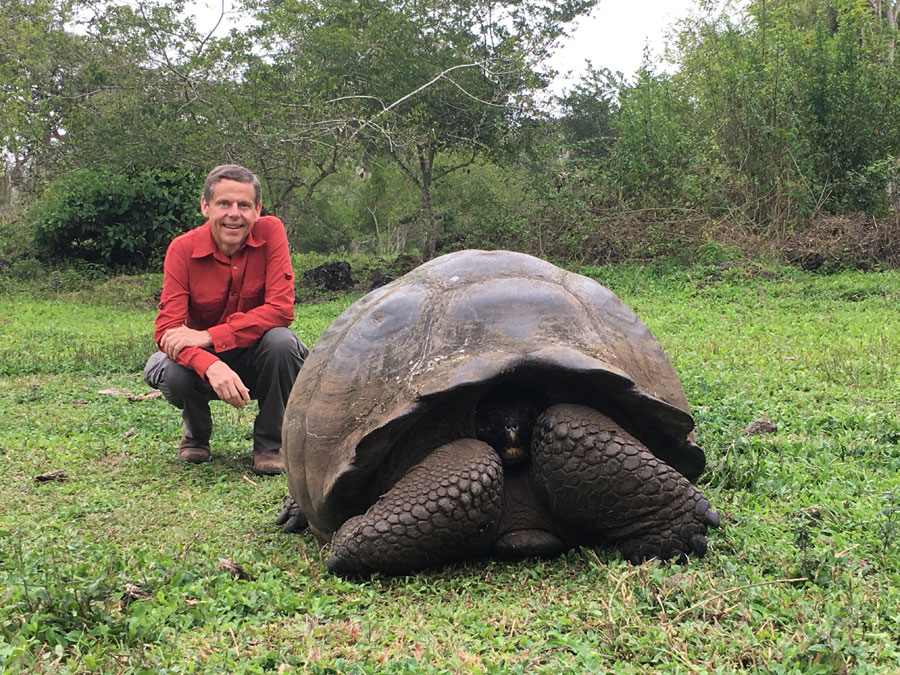 I am suspended between heaven and earth as I watch the giant ray gently flap its 18-foot wings and glide to within inches of my snorkel and mask. I enjoy a play date with a carefree juvenile sea lion. I lie flat on ropey lava and go eyeball to eyeball with a dragon-like marine iguana. And I sit beside a giant tortoise that makes me feel tiny, chewing in slow motion as mountain mists swirl around us. Such magical moments are almost routine for visitors to the Galapagos Islands, a far-flung archipelago in the Pacific Ocean 1,000 kilometres off the coast of Ecuador. These are the islands where Charles Darwin’s ideas of evolution took wing and where today’s visitors can still experience the same wildlife encounters that sparked that huge leap forward. They have been described as “Darwin’s eternal and spectacular living laboratory” for good reason.

Almost uniquely on our human-infested planet, the Galapagos Islands have preserved their primeval ecosystem. Ongoing volcanic activity reflects the processes that created these islands and the primeval lava landscapes are part of their dramatic attraction. Fernandina, one of the islands I visited, had erupted just a few weeks prior. There are 20 islands and many islets in the Galapagos, all with different ecosystems. Their geographical location at the meeting of three ocean currents makes them one of the world’s richest marine ecosystems.

The converging currents and the new volcanic terrain, together with the extreme isolation of the islands, led to the development of utterly unique plant and animal life – such as marine iguanas, flightless cormorants, giant tortoises, tropical penguins and Galapagos fur seals … and the many different species of finches, which inspired Charles Darwin’s theory of evolution by natural selection following his visit in 1835. However, the Galapagos experience goes way beyond the history, geography and science. Back in my Happy Place, I am crouching in the fine white sands of aptly named Darwin Bay on Genovesa Island, communing with an endemic Galapagos sea lion. She has just lumbered up on the beach after playfully chasing a bemused white-tipped shark out of the adjacent lagoon. I look into her lugubrious eyes, she stretches out on the sun-warmed sand, and I honestly believe we are smiling at each other. The Galapagos it seems, are not just my Happy Place. My recommendation for organizing a memorable trip to the Galapagos is Metropolitan Touring at www.metropolitan-touring.com.