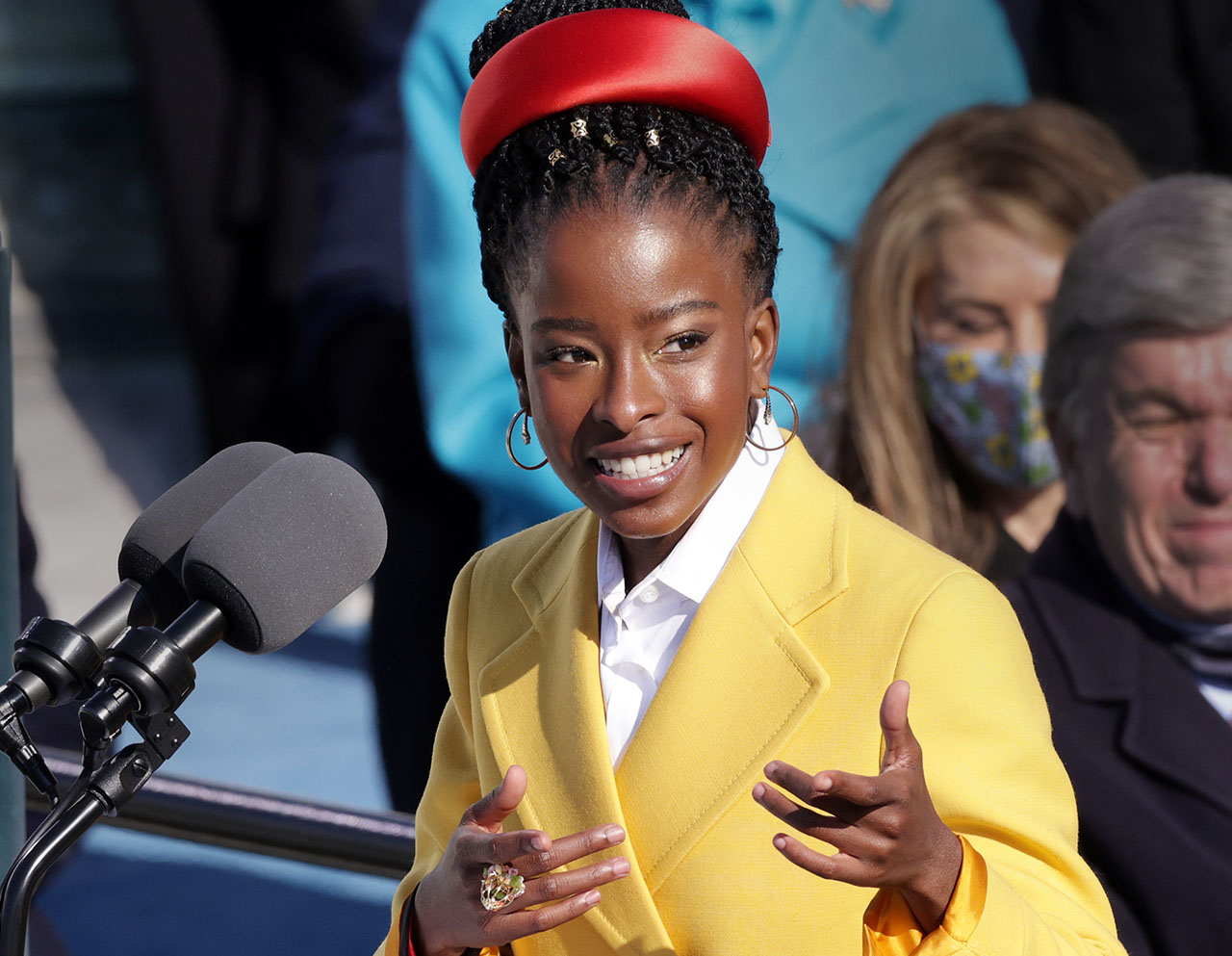 At 22, Amanda Gorman is the youngest poet to perform at a Presidential inauguration, joining the august ranks of Robert Frost and Maya Angelou. Photo: Alex Wong/Getty Images

L.A. poet Amanda Gorman became an overnight sensation following her eloquent performance at the inauguration of U.S. President Joe Biden on Wednesday. As a result, two of her books — which are not even out until September 2021 — catapulted to the top of Amazon’s best-seller list.

Gorman’s debut poetry collection, The Hill We Climb, takes the top spot, closely followed by her upcoming children’s book Change Sings: A Children’s Anthem. Her 2015 collection of poems, The One for Whom Food Is Not Enough, doesn’t appear to be on Amazon, but that’s likely just a matter of time.

Two other notable Black authors join Gorman at the top of Amazon’s list with Meena Harris, Vice-President Kamala Harris’s niece, in the third spot with a children’s book called Ambitious Girl. This is followed by A Promised Land, the first volume of Barack Obama’s presidential memoirs, which sold a record-breaking near 890,000 copies in the U.S. and Canada in its first 24 hours.

At yesterday’s ceremony, Gorman delivered her poem “The Hill We Climb,” offering a vision of hope for a deeply divided country in stark contrast to the scene at the Capitol just weeks ago, when a mob laid siege to the People’s House in a bid to overturn a democratic election. In fact, Gorman said the events of that day inspired some of the final lines of the poem: “We’ve seen a force that would shatter our nation rather than share it, would destroy our country if it meant delaying democracy. And this effort very nearly succeeded.”

Gorman, a graduate of Harvard University and the first U.S. National Youth Poet Laureate, had been recommended for the spot by first lady Dr. Jill Biden, who was wowed by her original performance of “In This Place: An American Lyric” at the Library of Congress in 2017.

“But while democracy can be periodically delayed,” she said, “it can never be permanently defeated. In this truth, in this faith we trust.

“For while we have our eyes on the future, history has its eyes on us,” she continued, in a direct reference to the musical “Hamilton.”

Gorman’s powerful poem concluded with a challenge to leave behind a country better than the one we were left. “We will rebuild, reconcile and recover in every known nook of our nation, in every corner called our country our people diverse and beautiful will emerge battered and beautiful. When day comes, we step out of the shade aflame and unafraid. The new dawn blooms as we free it. For there is always light. If only we’re brave enough to see it. If only we’re brave enough to be it.”

As to her new best-seller status, the poet wrote on Twitter, “I AM ON THE FLOOR MY BOOKS ARE #1 & #2 ON AMAZON AFTER 1 DAY! Thank you so much to everyone for supporting me and my words. As Yeats put it: ‘For words alone are certain good: Sing, then’”

At the time of this writing, her Twitter post had received more than 580,000 likes, with her fan base blossoming from 189,000 followers before her performance to its current count of 1.2 M.

Praise for the President’s Poet

“Wasn’t @TheAmandaGorman’s poem just stunning? She’s promised to run for president in 2036 and I for one can’t wait,” Hillary Clinton wrote.

Oprah, who reportedly gifted the young poet with earrings and a caged bird ring to wear on Inauguration Day, also weighed in, tweeting,“I have never been prouder to see another young woman rise! Brava Brava, @TheAmandaGorman! Maya Angelou is cheering—and so am I.”

The birdcage ring is a tribute to previous inauguration poet Maya Angelou’s work I Know Why the Caged Bird Sings. It continues with a tradition Oprah started when she sent Angelou a blue Chanel coat and a pair of gloves to wear for her reading at Bill Clinton’s 1993 inauguration.

While you could never tell it from her commanding delivery, Gorman had to overcome a speech impediment as a child and young adult; she had difficulty pronouncing the letter “R.” To practise saying the letter, she told CNN’s Anderson Cooper, she’d listen on repeat to one song she said was “packed with ‘R’s'” — “Aaron Burr, Sir” from Lin-Manuel Miranda’s historical opus, “Hamilton.”

Coincidentally, overcoming a speech impediment is something Gorman shares with the 46th president, who has been open about his difficulties with stuttering.

But President Biden and Amanda Gorman have something else in common. They have both smashed popular stereotypes about age, with Biden being sworn in as the oldest president in history and Gorman, the first Young National Poet and the youngest poet to participate in an inauguration ceremony.