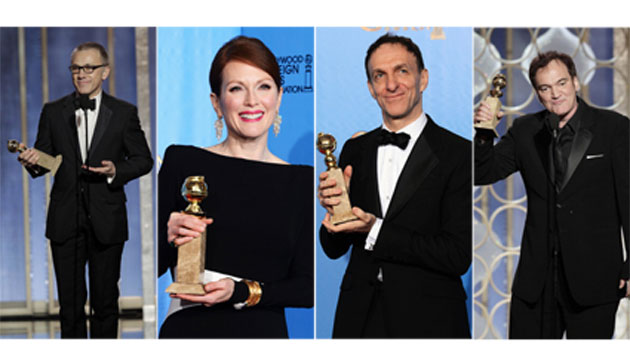 It was a night of surprise wins, award show vindication, and one cryptic acceptance speech at the 70th annual Golden Globes.

The emerging theme of the evening saw presumed Oscar favourite Lincoln getting swept in every category but one. Seven-time Globe nominee Daniel Day-Lewis, 55, won his second gold statuette, this time for his portrayal of Honest Abe in the presidential pic. The Golden Globes – often considered a good predictor of how the Academy Awards may play out – suggest thatLincoln, which leads the Oscar nominations with 12, could be in for a rough night of playing the bridesmaid.

Other Lincoln stars who fell just short last night include Sally Field, 66, nominated in the best supporting actress category for her turn as Mary Todd Lincoln, which went to Les Miserables star Anne Hathaway; Tony Kushner, 56, whose screenplay was passed over for Quentin Tarantino’s Django Unchained; and director Steven Spielberg, 66, bested by Argo director Ben Affleck, who many believe the Academy snubbed by omitting him from their directing category.

Argo also trumped Lincoln for best picture, possibly foreshadowing an upset when the two films face off again in February at the Kodak Theatre.

While Lincoln didn’t have a stellar night, boomer nominees did quite well. The evening began with 56-year-old Christoph Waltz taking the Globe for best supporting actor in a motion picture, which has to make him the favourite for the Oscar in the same category. His win was followed by a best supporting actress in a series, miniseries or TV movie for Dame Maggie Smith who was nominated for her first Golden Globe way back in 1964. At 78, the 11-time nominee (including two previous wins) took home the award for her work on season 2 of the hit Brit drama Downton Abbey.

Julianne Moore, meanwhile, rode her bang-on impression of former U.S. vice-presidential candidate Sarah Palin in Game Change to an award for best actress in the same television category. The Globes also boasted a little Cancon, with Toronto-based composer Mychael Danna (54) taking the award for best motion picture score for Life of Pi, based on the Man Booker-winning novel by CanLit star Yann Martel.  See below for a list of more boomer winners.

The other big news of the evening came courtesy of Jodie Foster, who at age 50 was celebrated with the Cecil B. DeMille Award for her acclaimed career in film. Foster began by shouting “I’m 50! … I was going to bring my walker tonight but it just didn’t go with the cleavage,” and followed with an acceptance speech that at one point served as a public coming out and at other times suggested that she was retiring.

“I’m just going to put it out there, loud and proud …” Foster began, before joking that she was announcing that she’s single. “I hope you’re not disappointed that there won’t be a big coming-out speech tonight. I already did my coming-out about a thousand years ago back in the stone age in those very quaint days when a fragile young girl would open up to trusted friends and family and co-workers and then gradually, proudly to everyone who knew her to everyone she actually met.”

Foster went on to discuss her life in the spotlight, thank her family and then let loose with some cryptic comments that left many wondering if she was stepping away from the silver screen.

“From now on, I may be holding a different talking stick … maybe it won’t open on 3,000 screens, maybe it’ll be so quiet and delicate that only dogs can hear it whistle, but it will be my writing on the wall: Jodie Foster was here.”

As it turns out, in the press room after the show, Foster clarified that she wasn’t retiring but possibly looking at directing more.

Before Foster took to the stage, former U.S. president Bill Clinton made a surprise appearance, entering to a standing ovation to introduce the film Lincoln. After he finished, co-hosts Tina Fey and Amy Poehler ran on stage excitedly, the latter exclaiming, “That was Hillary Clinton’s husband!”

Poehler, who along with Fey proved hilarious hosts, were given precious little time to actually lift the broadcast from the banality of the standard award show structure. When they were on stage, they were in top form, with Poehler uttering the line of the night in support of Zero Dark Thirty director Kathryn Bigelow: “When it comes to torture, I trust the woman who was married to James Cameron for three years.”