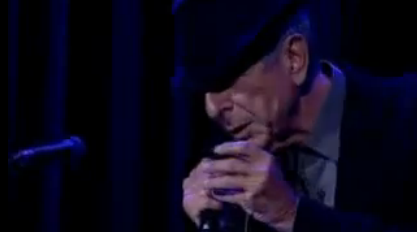 “There’s a blaze of light in every word. It doesn’t matter which you heard …”

It’s a sure sign that you’re at a Leonard Cohen concert when the multitude of stagehands and technicians, usually clad in jeans and t-shirts, are dressed in dark suits and fedoras – a fitting sight for fans at the Air Canada Centre in Toronto last night. They eagerly awaited their first glimpse of Canada’s celebrated man of words on stage in more than four years.

Then the lights went down and the applause rose from a hush to a giddy cheer as a row of musicians and singers – seen only in silhouette against a salmon-coloured backdrop – walked calmly across the stage and took their places. Then, the arena got louder, reaching a crescendo as the familiar outline of a slim suit and fedora appeared from the darkness.
Leonard Cohen jogged to centre stage, tipping his hat to the crowd and breaking straight into “Dance Me to the End of Love.” There was no doubt that it was show time, and Cohen was ready to entertain.

“We’ve been on the road for a while now,” Cohen remarked after the first song. “I hadn’t sung for about 15 years and now you can’t get rid of me.” The crowd laughed and roared with applause.

The Leonard Cohen who riveted the crowd until midnight was a far different man than the Leonard Cohen who took to a makeshift stage at the intersection of Bay and Bloor streets only six years ago in support of his collection of poetry, Book of Longing. That day, Cohen, forced to head back onto the road from semi-retirement thanks to financial fraud perpetrated by his ex-business manager, seemed nervous and unsure, often requiring lyrical prompting from accompanying Canuck musicians Ron Sexsmith and members of The Barenaked Ladies. In 2008, Cohen came back to Toronto to play a sold out Sony Centre. His career experiencing an unprecedented resurgence, he literally had the crowd dancing in the aisles. But still, there was an underlying sense that he didn’t quite believe it was happening.

Last night, however, the 78-year-old Cohen took charge of the stage as “Field Commander Cohen” may have done in the trenches decades ago. He was confident and comfortable, alternately dancing, swaying, and even falling to his knees to convey the weight of a lyric.

All the hits were covered, along with selections from his latest album Old Ideas. Cohen wrapped his raspy baritone around heavier numbers, like “Bird on a Wire,” “Who By Fire,” and “Darkness” before acknowledging the melancholy nature of many of his songs:

“Sometimes I stumble out of bed and make it to the mirror and say, ‘Lighten up, Leonard.'”

Everyone laughed, and the next thing you know we were clapping along and singing the chorus to “Ain’t No Cure for Love.”

On a few of the numbers, such as “A Thousand Kisses Deep” and the beginning of “Alexandra Leaving,” Cohen recited the lyrics rather than sang them, bringing the intimacy of a coffee house poetry reading to a packed hockey arena.

Longtime Cohen collaborator Sharon Robinson, who sung backing vocals, took over on “Alexandra Leaving” (which she co-wrote) with a soulful, haunting performance. The two other backing vocalists, Charley and Hattie Webb, also took centre stage at one point with a stunning rendition of “If It Be Your Will.” (It must also be noted that this trio always make even the simplest back-up harmonies a joy to take in at Cohen’s concerts.)

Special recognition must also go to the band, including Spanish guitar master Javier Mas and Russian violinist Alexandru Bublitchi, both of whose multiple solos lifted Cohen’s songs to new heights of melodic bliss.

Cohen, for all of the adoration he received from the crowd, retained his trademark humility that borders on self-deprecating.

“Thanks so much for not going home,” he said upon returning from intermission. “It would be terrible to come out here and find a skating rink.”

Of course, everyone stayed. The most moving part of the evening came in the second half of the show, as Cohen dropped to his knees for a rendition of his most famous song, “Hallelujah.” As if in prayer, Cohen clasped his hands and sang, the crowd joining in on the chorus as the light spilled off the stage and into the audience. The song ended and the standing ovation only subdued when Cohen broke into “Take This Waltz,” with many in the crowd still wiping away tears.

This emotion is a direct result of the sense of spirituality that permeates all of Cohen’s shows, perhaps more so now more than ever. This is a man who, in his 70s, was forced back on the road because he’d very nearly lost everything, only to find waves of love and devotion awaiting his return. This is a man who made a massive Toronto arena feel as small as an underground Montreal poetry club simply through creating an atmosphere of intimacy, reflection, and humility. This is also a man very cognizant of his own existence, noting that while he hopes to be back at age 80, “we may or may not see each other again, so I promise you tonight we’ll give you everything we’ve got.”

That’s exactly what he did, and the fans in Toronto couldn’t have left happier. If we’d all worn fedoras, we’d have certainly tipped them to Leonard.

Leonard Cohen returns for another show at the Air Canada Centre tonight, followed by shows in Kanata, London and Kingston, ON, in the coming days. For more information, visit LeonardCohen.com.