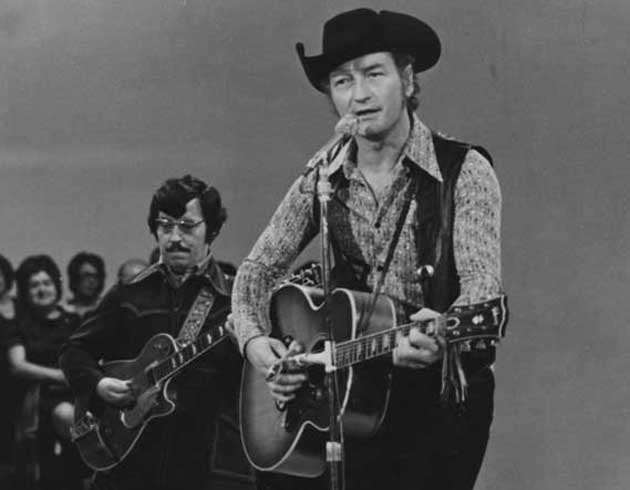 From remembering Canadian legend Stompin’ Tom Connors to highlights from the inaugural broadcast of the Canadian Screen Awards, we’ve got the latest news on arts, entertainment and culture.

Stompin’ Tom Connors is about as Canadian as maple syrup and back bacon. After all, who else could turn songs about Ontario towns like Sudbury and Timmins into hits? Today, folks from coast to coast are mourning the 77-year-old’s passing. In memory of one of our nation’s most beloved artists, here’s the Stompin’ Tom film Across This Land.

Last Sunday saw the inaugural broadcast of the Canadian Screen Awards – the new film, television, and digital honours that replace the now-retired Genie and Gemini awards. The show was hosted by the always funny Martin Short, and saw Quebec film War Witch (Rebelle), which was nominated for a best international film Oscar last month, picked up ten awards including best picture. For a full rundown of the ceremony and the winners, check out our live blog.

The Banff World Media Festival is honouring Seinfeld star Julia Louis-Dreyfus, 52, with the first ever Variety TV Impact Award, which “recognizes an actor or executive who has made ‘a significant and meaningful impact’ in television,” according to CBC. Louis-Dreyfus, who won multiple awards for her work on sitcoms such as Seinfeld and The New Adventures of Old Christine, currently stars as the Vice-President of the United States in the HBO series Veep. The Variety TV Impact Award will be presented at the Banff festival in June…..Regis Philbin, 81, announced he’s returning to television with a talk show on the new Fox Sports 1 network. The veteran television personality, who holds the Guinness World Record for “the most time spent in front of a television camera” will reportedly host a sports-themed panel show, similar in format to The View, on the 24 hour sports network. Philbin retired as host of the long-running daytime talk show Live! with Regis and Kelly (formerly Live! with Regis and Kathy Lee) in 2011 when his contract expired…..In sad news, actress Valerie Harper, 73, known for her starring role as Rhoda on The Mary Tyler Moore Show, announced she’s been diagnosed with terminal brain cancer. In an interview with People magazine, she said, “I don’t think of dying. I think of being here now.”…..For most people cleaning the house is a chore, but for Lawrence Joseph and Thomas Schultz, the legwork turned into an unexpected windfall. The two purchased a Bellport, New York, cottage once owned by Armenian-American artist Arthur Pinajian and stumbled upon a “thousands of paintings, drawings and journals,” he left behind. Pinajian, who grew up in New Jersey, died in 1999 at age 85. The find, reported now but which actually occurred in 2007, is worth an estimated $30 million.