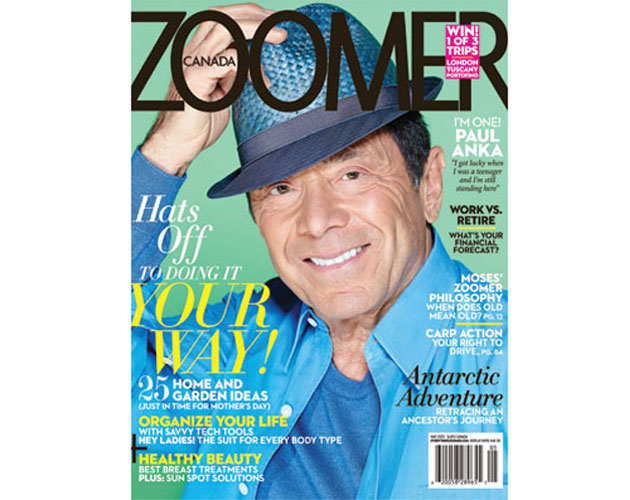 Imagine if, in 1957, a 16-year-old Paul Anka decided NOT to write a song about his infatuation with a 19-year-old girl named Diana, and instead joined his father in the restaurant business. A lesser teen idol would have conquered the pop charts in the late 1950s. Sinatra would have never crooned the Anka-penned “My Way.” And Justin Bieber may never have become famous enough to have a monkey confiscated in Germany.

Luckily (well, except for the monkey), Anka made the trek from Ottawa to New York to record “Diana,” paving the way for future teen idols and kick-starting a career that’s filled with songwriting hits and screaming fans that continues to this day. Literally. I witnessed it first hand at a concert just a few months ago in Toronto. At first the show had me seeking out a calendar to ensure I hadn’t entered some spontaneous time warp back to the 50s.

I’ve met with Anka, 72, many times since then, our conversations becoming the basis for this month’s Zoomer cover story and photo shoot “Put Your Head On My Shoulder.”

During our talks Anka was completely open about everything from his continued longevity, his health, his family, and how his ability to write hit songs for others helped save his career when the British Invasion wiped the other teen idols off the radio. And, of course, there were the tales of hanging out with Frank Sinatra and the Rat Pack before kitschy shows and green-eyed tourists took over Las Vegas.

Most unique of all, Anka’s worked in some form or other with every major recording artist from Buddy Holly to Michael Bublé, and he tells me he has no plans to slow down. Why would he? He’s still making music and the fans are still falling over themselves at his concerts. I was lucky enough to peek behind the curtain and write Anka’s story…so far.

Zoomer magazine’s May 2013 issue, featuring Paul Anka on the cover, is on newsstands now. And click through our slideshow for videos of some of our favourite Paul Anka moments.

Check out our related posts for past cover stories you may enjoy.