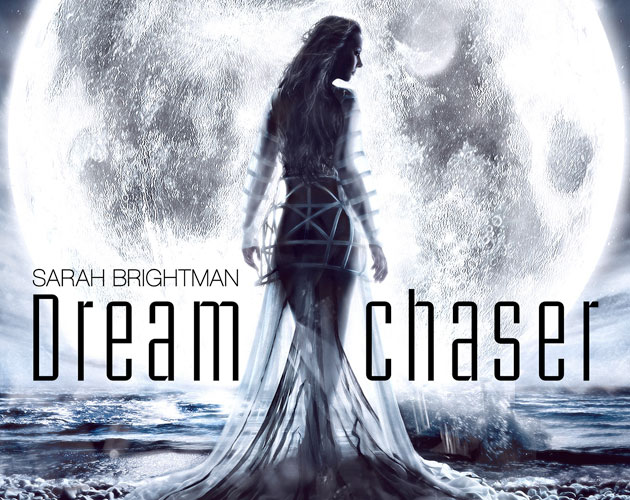 There’s not actually a man in the moon, but soon there might just be a soprano among the stars. That’s because Sarah Brightman, the English classical crossover star who’s sold millions of albums worldwide and whose 11th studio album, Dreamchaser, debuted this week, is also an official “Cosmonaut in training” with the Russian Space Federation. If it were up to her, however, the tidbit about space travel would have remained a secret a little longer (more on that later).

Brightman, who sees herself as “an interpreter of music…from all genres, from all times” began her career on the stage (including originating the leading role of Christine Daaé in the first production of The Phantom of the Opera), making the transition to a solo performer by tackling genres as varied as disco, pop, opera, jazz, and gothic music.

With Dreamchaser, the 52-year-old takes inspiration from her out-of-this-world ambitions, part of which reportedly include becoming the first artist to record a song in space with a visit to the International Space Station (ISS) in 2015. This, of course, raises a number of questions: what’s it like to train for space travel? What song will you sing once you get there? And what’ll you be doing on Earth until then? So, Zoomer’s Mike Crisolago decided to ask Sarah Brightman herself.

MIKE CRISOLAGO: Lets start with Dreamchaser. This compilation of songs was inspired by your dreams of space travel. How did the album come about?

MC: Since it’s become something of a calling card, do you feel pressure to try something new and different with each album?

SB: No, never. And actually the road I’ve taken has been a harder one because I’ve done what I wanted to do and what I was passionate about. I’ve never been concerned about getting things for radio or doing what the fans may like or think that they want. And actually, now it’s naturally become that everybody expects the unexpected.

MC: Along with your music there’s lots of talk of you going into space, which I think resonates particularly strongly with Canadians since one of our own, Chris Hadfield, is currently the commander of the ISS.

SB: He’s doing all sorts of wonderful things, as well as running the whole show. [Laughs] I don’t know where he gets the time. It’s so great because as kids – I came up through the 60s – space was extremely relevant then. So we all thought this is going to be part of our future, and then it went very, very quiet. Suddenly, with everything that’s going on, it’s actually becoming a reality again. When you see things that Chris is doing there’s a sort of normality suddenly about it as if it’s going to happen for us all again. It’s great.

MC: You’ll be one of a handful of private citizens who’ve ever embarked on a space mission. However, you told me you wished news of your planned trip to the ISS hadn’t leaked out so soon.

SB: It actually came from Russia – and I had to go with it and be honest about it and what I was doing. We kept it quiet for a very long time and the people [involved] in all of this said, “We can’t believe that nothing’s leaked because you’re an artist.” And I said, “I know, and I’m going to go this way as long as possible.” It’s a very personal thing and it’s not necessarily something you want everybody to know about. It happened, so I’ve just gone with it and that’s really why we’re all having these chats about it. [Laughs]

MC: Now that it’s out, how has the training been so far?

SB: It’s very different … when you’re in the middle of it. Even testing, in that atmosphere, it’s far more difficult than one thinks. So that was what surprised me. Lots of things come into play psychologically – that was probably the most challenging thing for me to understand that it was something that I really could grasp and that I really, really wanted to do. Otherwise, you couldn’t do it. I realized – and it was a beautiful thing that I did – it was something very real and a real need and something I really felt I could go through. So that’s the bit that you can’t quite explain unless you’re actually in it.

MC: Do you ever just sit back and think about the enormity of this endeavor?

SB: I’m actually very practical about it. It will probably happen when I’m there because apparently that’s what happens. From talking to all the cosmonauts and astronauts that I have, they’ve said it’s beyond anything you can imagine and the feeling of it is absolutely extraordinary.

MC: It’s been widely reported that you’re aiming to be the first person to perform a song in space. Any ideas of what you’d like to sing?

SB: It would be beautiful to be able to sing from there and connect with an orchestra or a children’s choir. There are so many things to get through and so many thing to learn at the moment. [The song] will show it’s face, it will become very clear. I’m sure I’ll know at the time.

MC: You’ll also be representing UNESCO (the United Nations Organization for Education, Science and Culture) as their Artist for Peace Ambassador on the trip. What does that role entail?

SB: I talk with them, and talk with the scientists who work under the UNESCO umbrella, and find out their ideas, maybe what focuses I can bring on this trip. It’s a way off yet, but … if somebody’s going up who’s a musician, a normal citizen, I think there will be a certain amount of focus and I think maybe a lot of people might be interested and want to follow me through the journey and look at it from my perspective and from the perspective I may have looking on the Earth to areas of drought and plastic in the ocean, areas of beauty, war-torn areas, the way things have changed. I’m looking toward those possibilities at the moment.

MC: Before you go into space you’ll be touring here on Earth, including in Canada, in support of Dreamchaser. Have you enjoyed touring here in the past?

SB: I love Canada. My grandfather was born in Saskatchewan and he suffered from asthma and they had to take him back to England. They were a farming family. He had all sorts of stories and things about the family there, so I feel very close to Canada in that way and it’s nice when I come here with my mother if we’re touring, she’s come on the coach trips to various areas and gone over there and said, “Well you know this is where your grandfather was.” It’s nice in that way. I feel very easy here because culturally it’s very similar to how I’d been brought up, and the people. There’s a similarity. So I feel very relaxed in this country [and have] all sorts of memories, too many [to talk about] in such a short space of time.