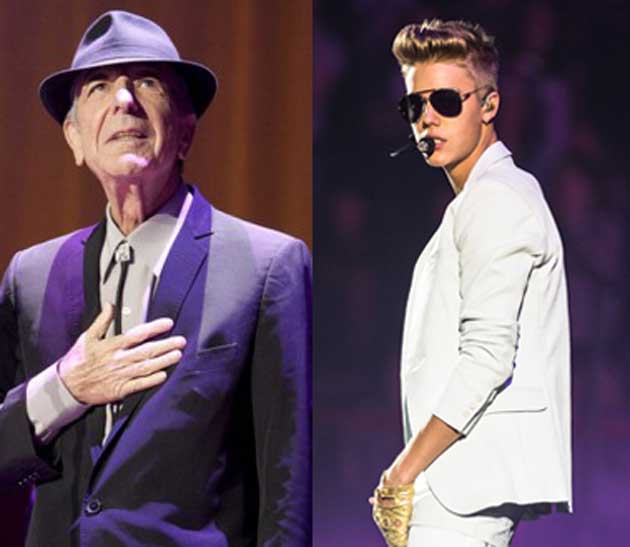 NOTE: This article originally appeared in April 2013, shortly after Leonard Cohen beat out Justin Bieber for the 2013 Artist of the Year Juno.

Some guy named Leonard Cohen won the Artist of the Year honour at a 2013 Juno Awards gala, prompting vocal Justin Bieber fans (“Beliebers”) to lose it on Twitter. A sampling:

“I CAN’T BELIEVE JUSTIN LOSE ARTIST OF THE YEAR TO LEONARD COHEN (who dat) WE WERE SUPPOSED TO VOTE YOU KNOW,” @ollkidrauhl lamented, her grief emphasized by the use of all CAP LOCKS lettering.

Meanwhile, @BieberzBrunette on this travesty of justice: “ok what the flying f**k? WHO THE F**K IS THIS LEONARD COHEN GUY!??!?! how the f**k did he win the JUNO like wtf is happening us?!?!?!!?”

Well Beliebers, there’s no reason to be too outraged. Leonard Cohen is basically the Justin Bieber of his time. Sure, that time was, you know, like, the olden days, but you might like him if you realized how similar the two are.

Just like Justin, Leonard Cohen is a singer from Canada, though he’s about your grandfather’s age. Wikipedia says he’s a songwriter – you know, basically like all those people who write Justin Bieber’s songs. His most famous song is that “Hallelujah” one, from Shrek.

Nevertheless, like Bieber, Cohen is known for being a hit with the ladies. When it comes to making girls swoon with their song lyrics, the two just have a different take on what constitutes romance:

Leonard: “And I’ll dance with you in Vienna/I’ll be wearing a river’s disguise/The hyacinth wild on my shoulder/My mouth on the dew of your thighs.” – “Take This Waltz“

Justin: “Swag swag swag, on you/Chillin’ by the fire while we eatin’ fondue.” – “Boyfriend“

Leonard Cohen didn’t date anyone who was a TV and music star like Selena Gomez, but he did have a fling with one singer from when your parents were young called Janis Joplin (See our related, upcoming article: Who the F**k is This Janis Joplin!?!?!?). Janis never had her own TV show like Selena but then Janis also never made her man cry like Selena, so we’ll call that one even.

True, Leonard doesn’t quite have the dance moves that the Biebs has, nor the hair. He’s never had a monkey confiscated by German authorities and we’re not certain whether he hopes Anne Frank would have liked his music. But that’s all just superficial.

Both are singers and they both have passions they’d love to pursue. Leonard likes to write: “I didn’t want to write for pay. I wanted to be paid for what I write.” And Justin dreams of “building” a legacy in other ways: “I’d like to be an architect. That would be cool. I like drawing.”

So when you get right down to it, Leonard Cohen is just Justin Bieber with a deeper voice, a slower melody, and a fedora. And, like Biebs, he’s a nice guy. You can bet that, if Justin won artist of the year, Leonard’s fans wouldn’t have lashed out on social media. In fact, like Leonard, most of them probably don’t even have Twitter.