Behind the Cover: Elizabeth Taylor, June 2013 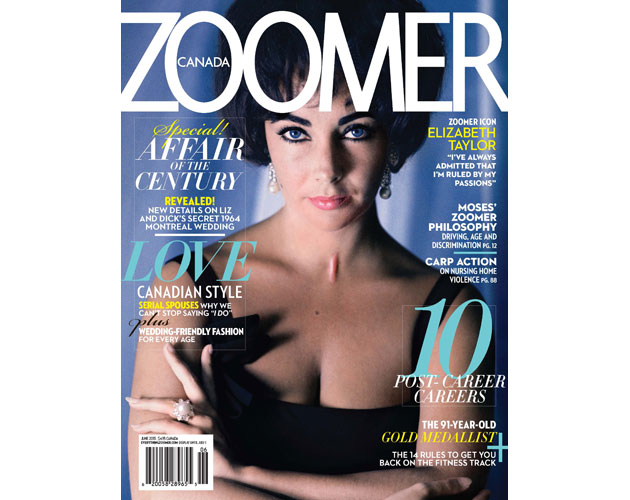 The editorial staff at Zoomer had tossed around the idea of a nostalgic cover since we began publishing the magazine in 2008. But it never seemed the right time. But there is something about this arresting image of iconic star Elizabeth Taylor that made us all certain that the time had come.

The idea came out of a story meeting where we decided to include stories and fashion shoots about second and third marriages and naturally, when multiple weddings are discussed, Liz is the first on the list given her eight trips down the aisle. Forever glamorous, talented and gorgeous, she captivated the world first as a child star in International Velvet through her transition to adult actress in such stellar performances in BUtterfield 8, Cat on a Hot Tin Roof, A Place in the Sun, Giant, Who’s Afraid of Virginia Wolf and, of course, the movie that placed her in the stratosphere but not for her acting: Cleopatra. This 1963 flick was a blockbuster and the highest earner of the year but still ran at a loss due to its high budget, but that wasn’t the real news. The film was a scandal during shooting when it became public that its two stars, Taylor and Welsh stage actor Richard Burton, were having an illicit affair despite their both being married.

The scandal was the best bad publicity of all time, and audiences flocked to see the finished product. But for the couple, Liz and Dick, the scandal followed them everywhere, even to Toronto in 1964.

Our cover story, written with reverence and wit by the talented Hugh Brewster, covers this specific moment in time with the lovers. Burton was in town headlining Hamlet at the O’Keefe Centre, and Liz was with him and remained hidden away at their suite at the King Edward Hotel. Brewster’s story delivers the goods on what happened during their stay, the crazed fans and moral do-gooders who stalked them wherever they went; Liz and Dick’s secret getaway to Lake Simcoe one weekend; and, of course, the marriage in Montreal’s Ritz Carleton.

Read more in the June issue of Zoomer and to whet your appetite, listen to Hugh Brewster discuss Liz and Dick (above), the greatest love story of the 20th-century.

This past week (on May 21, 2013) at the Cannes Film Festival, 20th Century Fox screened a fully restored and remastered 50th Anniversary print of its epic film, Cleopatra. Yes, that Cleo, the one starring the late legendary lovers Elizabeth Taylor and Richard Burton. Also on hand at the screening will be Liz’s son, Michael Wilding and Dick’s daughter, Kate Burton, joined by other relatives. Naturally, this being Cannes, a glitzy party follows, and the splashy affair is hosted Bulgari, the luxury jewelry maker whose baubles, bought by Burton and adored by Taylor during both of their tempestuous marriages, will be on display along with several costumes. In celebration Bulgari has created an original jewel inspired by Taylor and the movie and it will be auctioned to benefit the Elizabeth Taylor AIDS Foundation (ETAF). Both the screening and the after party are co-hosted by Oscar nominated actress Jessica Chastain (rumored to be soon-to-be-announced face of Bulgari).

But if you can’t get to Cannes, don’t despair. Tomorrow the film goes into limited theatrical release (check local listings) and an anniversary DVD and Blu-ray comes to a television near you by month’s end.