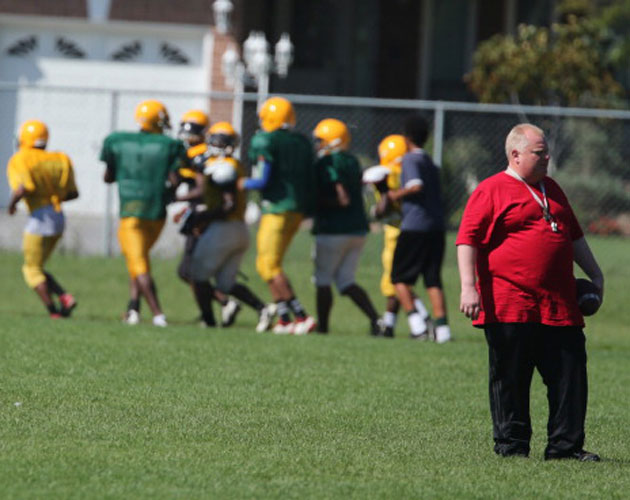 The stories surrounding Crackgate continue to capture the attention of onlookers and not just in the GTA or even in Canada. Jimmy Kimmel included a jab at the Toronto mayor in his monologue last week, saying, “I am not sure if he’s a mayor or a Chris Farley character.” And Jon Stewart took the stage last night to suggest Ford is cleaning up the city’s crack problem by smoking it.

We imagine the jokes and allegations will not end until Ford makes an official statement besides calling the claims “ridiculous.” But in the meant time, the mayor has been fired from his position as head coach of the Don Bosco Catholic Secondary School football team. We imagine he is heartbroken. After all – as we’ve previously mentioned – Ford would re-route city buses for these guys. You may think his release is related to recent crack video where he allegedly refers to the young men as “just f—ing minorities,” but surprisingly it is not. Toronto Catholic District School Board spokesman John Yan said he didn’t like the negative light Ford shed on the Don Bosco when he referred to it as “crime ridden” and their youth as “gang bangers” in a Sun News Network interview. Ford making a culturally insensitive comment? Shocker.

This isn’t the first time a football team has fired Ford. He was let go as head coach in 2001, after an alleged confrontation with a Newtonbrook Secondary School student. He denied allegations of the incident with a full mayoral agenda and defensive media conspiracy theories even then. He told the Toronto Star, “I’m in first in the mayor’s race. . . They’re going to do anything to stop me from becoming mayor of the city because they know when I become mayor, the party’s over. The gravy train is gonna come to an end and the wasteful spending will stop immediately.”

Ford’s brother, Doug, unintentionally added more fuel to Ford’s blazing fire this afternoon when he decided to address the media with flattering comments about the mayor, saying, “My brother is an honest and hard-working man with integrity, a man who has dedicated his life to serving others.” He also listed a number of nice things that Ford has done for the community. He finished his statement by scolding the media (specifically U.S website Gawker and the Toronto Star) for reporting on the allegations – how dare they. “All of this [his hard work], of course, is overshadowed by the constant stream of accusations coming forward against this mayor.” Adding, “Never, never has a Canadian politician or his family, been targeted by the media this way.” Poor Ford.

Well, let’s be honest for a minute. The media coverage on Toronto’s mayor does not come out of a twisted let’s-embarrass-Toronto-on-the-world-stage-by-making-up-outrageous-unpolitically-correct-stories-about-the-mayor master plan. Right, Michael Cooke? The lists of Ford’s gaffes are endless, and the entire fault lands in Ford’s lap, unfortunately.  In case some of Ford’s most prevalent pitfalls don’t come to mind, take a look at this list for a refresher.