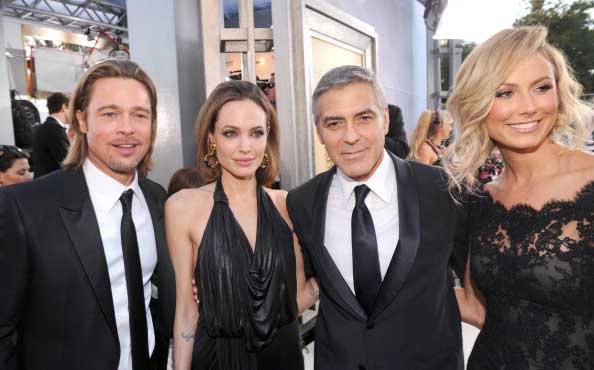 Why the eternal bachelor prefers friends — and dogs — to wives!

In recent months, the biggest cliffhanger in Hollywood hasn’t been whether or not the butler did it but will latest Mrs. George Clooney hopeful, professional wrestler and actress Stacy Keibler, finally make the classic film star an honest man?

Don’t count on it. Even before the couple’s recent breakup, Zoomer sat down with the candid and impossibly handsome silver-haired 50-year-old bachelor, who relayed he’s too weary to crawl down the aisle.

But don’t fret: Master Clooney has something more gratifying than a wedding ring.

“Friends,” he says, with that relentless sexy smile.

“One of my most beautiful friendships is coincidently with one of the prettiest men on the planet,” he offers. “You may have heard of him: Mr. Brad Pitt.”

He continues, “If you have three good friends, I think that’s half the battle [in life] — especially in [show business]. Everything else is icing on the cake.”

Although they are often competing against each other’s perfectly groomed stubble for awards and film roles, there is no professional rivalry between the two most coveted men.

“I have never felt competition with him,” the Lexington, Kentucky native attests. “I have only felt a great deal of friendship and support from him and for him.  We don’t wager, we don’t bet.  We just look at each other and slap each other on the back and wish each other well.”

Most impressively, Clooney adds, “Brad’s commitment and passion to help the world become a more peaceful and loving place inspires me. I don’t think Brad gets enough credit for his humanitarian efforts and accomplishments. He’s also a pretty damn fine actor. He deserves a few Oscars… but not as many as I have!”

But seriously, the other thing that keeps Clooney fulfilled — and warm at night – may surprise you.

Other than his Oscar Award, Clooney enthuses, “My dog. They are the best creatures on the earth. Although I only have one dog —who eats for four, by the way — I try to rescue as many as I can from the pound because despite all they’ve been through they have the most beautiful and resilient spirits. I suggest everyone go to your local pound and rescue a dog. They’re the best in the game.”

Pressing on, Zoomer couldn’t resist but ask: what makes the romantically stubborn Clooney so commitment shy? Well, other than his first failed marriage (to Talia Balsam), Clooney ambiguously points to his psyche as a clue.

“You can probably figure it out through the roles and films I’ve chosen,” he answers coyly. “Even I have never gotten to the bottom of my psyche and issues, so people are really wasting their time if they think they can. All the contradictions and conundrums within me I get to work out on the big screen.

If that’s true, we don’t even want to analyze what kind of psychology he was working out in Batman.