Coffee with Marilyn – Monroe, that is 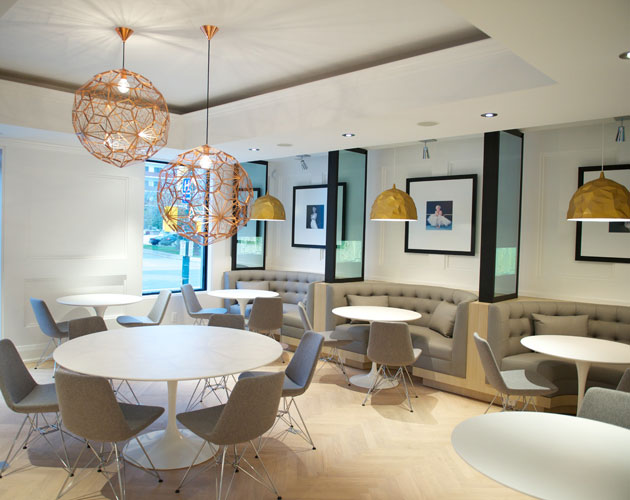 This month (Aug. 5, 2013) marks 50 years since the death of actress-turned-pop culture icon Marilyn Monroe. That’s half a century, and yet her appeal endures. There are more than 2,000 titles on Amazon.ca dedicated to the screen siren, more than a dozen actresses have endeavored to fill her bombshell shoes in small- and big-screen biopics, and Ms. Monroe continues to inspire beauty and style. MAC and Macy’s came out this year with Marilyn Monroe cosmetic and clothing collections respectively. What’s next? Cafés, of course.

The first Marilyn Monroe Café opened in Oakville, Ont. this spring, but it’s no Planet Hollywood-style, memorabilia-mashed diner archetype. It’s light-filled, minimal interior harkens to Milton Greene’s simple and sophisticated portraits of the star with mid-century modern decor. But why Oakville? Owner and president of the MM Café USA Dave Craig – okay, so it is a little like Planet Hollywood in that it’s a franchise business – says he wanted to test the waters in a smaller family-oriented city environment with a wide variety of people and visitors. Craig has been fascinated by Marilyn’s beauty and ability to captivate an audience since a young age. “As one of Hollywood’s most legendary stars, Marilyn was hot, and Monroe was cool; just like the persona, Marilyn Monroe Café now combines both of these elements.”

Portraits of Marilyn punctuate the café’s white walls as a feast for the eyes, and then there’s the coffee. Craig says customers love the Red Velvet Lattes made with the Ferrari of modern espresso machines, the Adonis T3, custom-designed in Italy. And the pastries don’t disappoint either – the chocolate croissant is decadent. A beautiful space and indulgent treats, as close you might be able to get to café homage. Look for locations opening soon in Vancouver and Orlando.