Five Big Books to Load on Your E-Reader 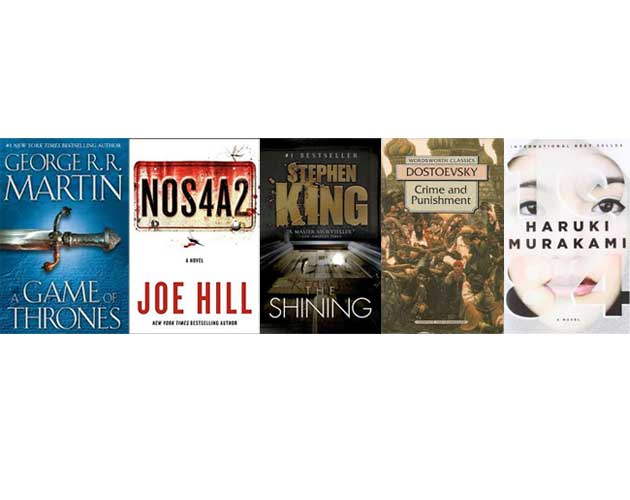 Waiting to tackle that big series at the end of your summer holiday? Don’t weigh down your carry-on – these books were made for your eReader.

Wondering what to do during the long wait until season 4 of HBO’s Game of Thrones? The five (so far) mammoth novels of George R.R. Martin’s Song of Ice and Fire series are tailor-made for eBook reading and will ensure no more shocks and surprises in the coming seasons. Download the full five-volume bundle and settle in. After all, winter is coming.

More chills await in Christmasland, the terrifying theme park at the heart of Joe Hill’s bestselling behemoth, NOS4A2. Award-winning horror writer Hill is Stephen King’s eldest son, but he brings a sinister sensibility all his own to this tale of a plucky heroine and a truly evil villain and his car that feeds off the souls the of his victims.

Speaking of King, this summer is a terrific time to revisit one of the horror icon’s masterpieces, The Shining. This classic tale of Jack Torrance and the terrors of the Overlook Hotel is perhaps best known through Kubrick’s film, but it’s worth going back to the source as King is publishing the sequel, Dr. Sleep, next month.

News buffs may want to read along with fugitive NSA whistle-blower Edward Snowden as he digs into Crime and Punishment during his prolonged layover in the Moscow airport. Dostoyevsky’s epic philosophical novel deals with questions of whether the benefits of a crime ever justify the crime itself. We await Snowden’s review.

An excess of spare time like Snowden’s may be just what every reader needs to work through the 1,000 pages of Haruki Murakami’s 1Q84 (whose heroine tackles Proust’s Remembrance of Things Past during her own forced isolation); failing that, the ability to load it on to your device and carry the sweeping fantasia with you might be just the thing. There are far worse ways to spend the errant moments of your summer.