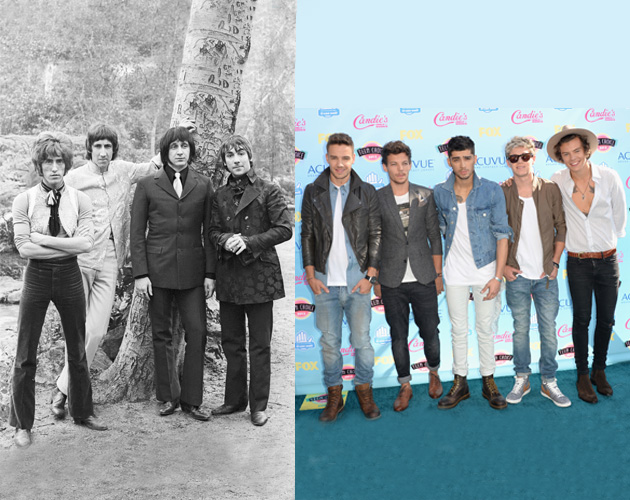 Pete Townshend, guitarist/songwriter of legendary British rock band The Who, weighed in on a potential inter-generational band war that threatened to consume all of popular music as we know it. And that is literally not an exaggeration at all.

But wait … let’s start at the beginning.

It all began yesterday, when news of a possible lawsuit by The Who against a really cool boy band called One Direction spread on Twitter. One Direction fans (dubbed “Directioners” by each other) flipped their carefully moussed lids, attacking the Who and their fans (dubbed “Old” by, well, Directioners) for this grave injustice. The Who, known for writing the theme song for one of those CSI shows – the song’s called “Baba O’Reilly” – supposedly said One Direction stole the tune’s musical intro for their anthem “Best Song Ever” (or “BSE”).

Boastful: “i bet the who don’t have over 10.5 million views on the song that sounds similar to ours #DontTouchBestSongEver” – @MesmericHoran

To despair: “If you do that i will freak. Out. Badly. Don’t you dare to touch bse. WHO THE HELL IS EVEN LISTENING TO THE WHO?! ‪#DontTouchBestSongEver” – @clara_lalelu_1D

To ever-so-slight overreaction: “B**ch please Ain’t nobody got time For your s**t

To embarrassing: “no one heard of The Who until now” – @Drunk_Liam

To confusion as to what exactly plagiarism is: “A song can look like another, but that doesn’t mean its plagiarism. So ‪#DontTouchBestSongEver” – @Maga_Lovatic_1D

Let’s face it – @Maga_Lovatic_1D is right. Sometimes one song does look like another. Even worse, sometimes it sounds like another.

Now, who’s to say whether blatantly copying another band’s music, changing it ever so slightly, and then using it to make your own song is actually plagiarism? It’s pretty murky water.

And so what if One Direction did rip off “Baba O’Reilly” (and admit to ripping off The Clash’s “Should I Stay or Should I Go?” last year and also kind of ripped off their own name from a U.S.-based punk band that was also called One Direction)? That doesn’t make them thieves. No, they’re simply “inspiration sponges” soaking up other people’s ideas. After all, they’ve only got 15 minutes.

The funny thing is the bands these two groups of fans – Directioners and Who-heads (that’s what Who fans call themselves, right?) – revere have more in common than they realize.

First, they’re both from the U.K. and are all male groups.

Both bands also got their start at a young age. The members of The Who met by chance, wrote their own music, worked their way onto pirate radio stations and gradually made a name for themselves. One Direction, conversely, got together the old-fashioned way – they were assembled by a music producer when each individual member failed to show significant solo talent on a shallow television talent show.

The Who became famous for rebelliously smashing their instruments on stage. Not to be outdone, One Direction is just adorable when they playfully throw crumpled pieces of paper at each other in their “Best Song Ever” VEVO video.

As for the looming band war, the hashtag #‪DontTouchBestSongEver was still trending worldwide on Twitter this morning so Townshend’s olive branch couldn’t have come at a better time.

“I like (BSE). I like One Direction. The chords I used and the chords they used are the same three chords we’ve all been using in basic pop music since Buddy Holly, Eddie Cochran and Chuck Berry made it clear that fancy chords don’t mean great music – not always, “ Townshend said in a statement. “One Direction are in my business, with a million fans, and I’m happy to think they may have been influenced a little bit by The Who.”

War averted. Whew! It’s looks like when it comes to my generation, the kids are alright. Hmmm … One Direction should write a song about that.