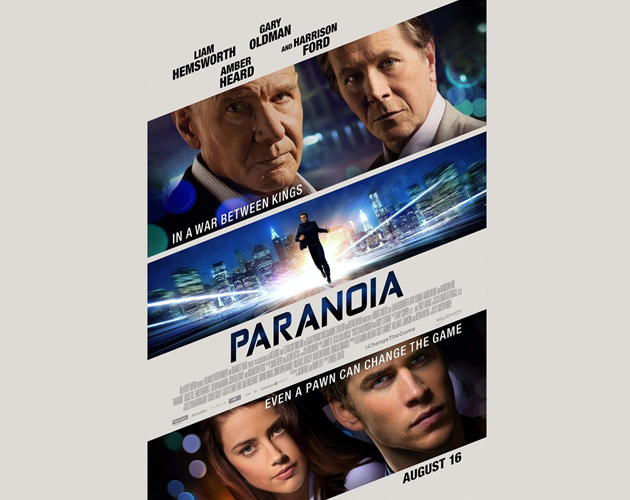 What’s it about?: It’s like Brave New World meets Wall Street, minus the brilliance of either. A young, ambitious Adam Cassidy (Hemsworth), who supports his ailing father Frank (Dreyfuss), is fired from a huge tech company owned by Nick Wyatt (Oldman) and decides to fund his going away bash with the corporate credit card. Wyatt threatens to sue for fraud unless Cassidy goes under cover at a rival tech firm owned by Jock Goddard (Ford) and steal the blueprints for their revolutionary new smartphone. Also, Amber Heard plays someone for Hemsworth to make out with and take his shirt off for.

The good: Well, lets see here – the thriller wasn’t very thrilling, all the tech talk proved pretty dry, and you can see the love story element coming from a mile away. But at least Gary Oldman is awesome, as always, though he looks like a corporate version of David Bowie with Michael Caine’s voice.

The bad: See above. Also, Harrison Ford is wasted in this film, Hemsworth isn’t particularly likeable, Dreyfuss is basically playing Judd Hirsch’s gruff inner-city dad character from Independence Day, and Amber Heard is beautiful, but interchangeable, with any attractive actress who may have played this role. There’s nothing that really makes you hang on the edge of your seat and, if anything, the plot offers moments that make you wonder why you’re rooting for Cassidy at all (for example, he finds out Wyatt’s company bugged his dad’s house with secret cameras and then doesn’t tell his dad).

The ugly: Nothing ugly. Everything’s just…there.

Can I bring my kinds and grandkids to see it?: Don’t bother.

Overall Popcorn Rating: 2.0 kernels out of 5