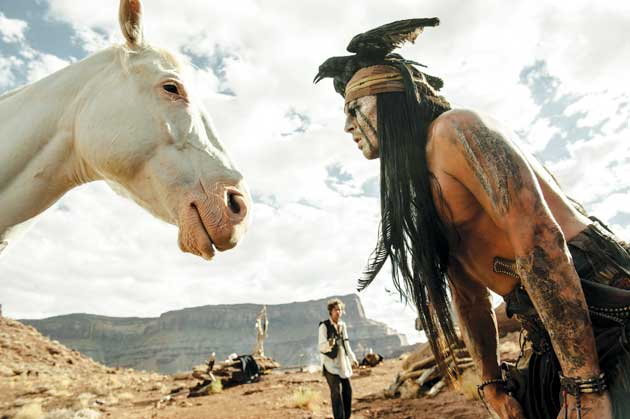 Now that the studio’s annual blockbuster bombardment has subsided it is safe to venture back into a dark theatre for more grown-up fare. We’re still talking light-hearted movies – after all, this is summer cinema – but with films based on old favourites and several with stars of a certain age, it’s enough to make us order an extra large popcorn and keep it all to ourselves.

Expect a darker more sombre vision for this franchise reboot of The Lone Ranger. Brought to you by the team behind Pirates of the Caribbean and starring Johnny Depp as Tonto (above) and Armie Hammer as the masked man, you can anticipate the same amount of fighting, only this time it will be gunplay not swordplay, chase scenes (on horseback, starring Silver, natch) and loads of witty banter. But don’t be disappointed if the William Tell Overture – theme song from the 1950s television series – doesn’t make the soundtrack. Although a Jay-Z stylized version would be great.

Who says menopause isn’t funny? In Hot Flashes, women of a certain age in the form of Brooke Shields, Daryl Hannah, Virginia Madsen and others take on a high-school basketball team all in the name of charity. Directed
by Susan Seidelman (Desperately Seeking Susan).

Red 2 promises more of what we loved about the original Red. The retired CIA operatives – played by Bruce Willis, Anthony Hopkins, John Malkovich and Helen Mirren – return to fight another day and early retirement at the same time.

What’s summer without a Woody Allen film? Luckily, we don’t have to find out. This time, it’s Blue Jasmine starring Alec Baldwin and Cate Blanchett, which tells the “story of the final stages of an acute crisis and a life of a fashionable New York housewife.” We can only guess who plays which.

Austenites will unite for Austenland, where an American girl, Keri Russell, shows up at an Austen convention in England, hoping to meet her real life Mr. Darcy.  ­