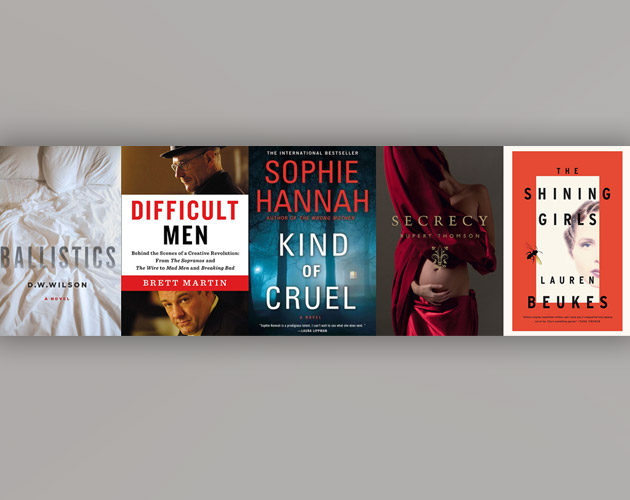 With the last long weekend of summer looming on the horizon, it’s time to dive into a final summer-reading binge. Whatever your poison, be it non-fiction, genre, or big “L” literary, consider one of these titles to see you through these last days of warm weather indulgence.

The Shining Girls by Lauren Beukes
This gripping thriller, about a time-traveling serial killer and the victim who escapes to hunt him down, has already landed a TV deal. Time-jumping through Chicago, the novel revolves around Harper Curtis, whose self-imposed mission is to murder the “shining girls” — young women set to make a difference in the world with their art, activism or scientific discoveries.

Difficult Men — Behind the Scenes of a Creative Revolution: From The Sopranos and The Wire to Mad Men and Breaking Bad by Brett Martin
Author Brett Martin argues that the new “golden age of television” has been brought about by the freedoms of subscription cable channels that don’t have to cater to sponsors, commercials, or concerns of language. This has resulted in a new kind of television character, an anti-hero who we root for despite his monstrous qualities. (Breaking Bad’s Walter White, anyone?) It’s a smart, engaging read that illuminates much about the realities of American television.

Ballistics by D.W. Wilson
In his debut novel — a strong contender for the major literary prizes — Wilson delivers a hyper-masculine novel about fathers and sons. Set against the backdrop of the raging forest fires of British Columbia in 2003, it is story of Alan West, who is sent by his dying grandfather to find the older man’s estranged son (Alan’s estranged father). He enlists the help of an old American soldier who went AWOL during the Vietman War, an intimate of the Wests, who shares the history of how both their families came together and tragically fell apart.

Kind of Cruel by Sophie Hannah
The seventh installment in Hannah’s critically acclaimed crime series, featuring husband-and-wife team Det. Constable Simon Waterhouse and Det. Sgt. Charlie Zaileris, is a complex psychological thriller that explores the elusive nature of memory. It revolves around an insomniac, whose visit to a hypnotherapist leads to her involvement in the investigation of primary school teacher’s murder.

Secrecy by Rupert Thomson
At once a love story, a murder mystery, and a straight-forward historical novel, Secrecy is a page-turner set in the repressive, pre-Enlightenment world of Florence, Italy. It is the story of the tortured sculptor Gaetano Zummo, a fugitive running from his past, who is put in danger by his latest commission to create a female nude.