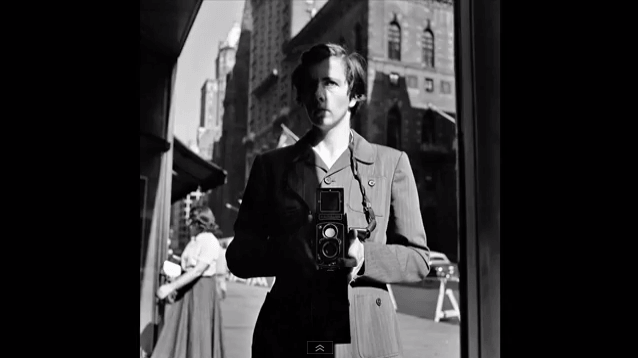 Choice Quote: “My mission is to put Vivian in the history books.” — John Maloof

The Hype: An eccentric Chicago nanny is found to secretly be one of America’s most prolific and talented street photographers, whose work is gaining attention and acclaim in the years following her death.

The Reality: This is one of the most entertaining, engrossing films I’ve seen all festival.

Director John Maloof discovered Maier’s work by accident, purchasing a box of negatives at auction in 2007 with hopes of finding historical photos of Chicago for a book he was writing. Little did he know he stumbled upon the work of an unknown gem of American photography.

Through developing the negatives and posting them online, Maloof gained Maier a following. But, after amassing thousands of rolls of negatives, he knew there had to be more to this brilliant photographer’s story. Who was she? And why did she hoard thousands upon thousands of negatives without ever printing them for anyone to see?

Beginning with her obituary, published around the same time he bought the photos, Maloof unravels the layers of Maier’s life, beginning with her work as a nanny, by speaking to a number of her former employees and the kids – all grown up now – whom she cared for from the mid-1950s to the mid-1990s.

About the only thing anyone can agree on is that she always had her trademark Rolleiflex camera around her neck – whether she was walking with the kids through the city or exploring the slums and seedy sides of Chicago on her own.

The other personal accounts from the people who knew her vary: was she French or American? Did the children she worked with love her or did she have a dark, violent side. Why did she insist on hoarding piles upon piles of newspapers, trinkets, items she found in the trash in alleyways? Why did she bring her tape recorder to the grocery store and interview shoppers regarding their opinions on the politics of the day? And why, most of all, did Maier never show anyone her work?

Perhaps Maloof should have become a private eye, because his detective work here is top notch, piecing together clues from Maier’s photos, former colleagues, and very fractured family history to form an image of a woman whose story transcends continents and conventional thinking.

To top it off, the revelation Maloof uncovers at the end, while visiting France, is a fitting end to the tale…or simplyywhat we know of Maier’s life so far.

The Verdict: Finding Vivian Maier is straightforward, funny, and endlessly fascinating – a fitting portrait of an artist whose life is shrouded in mystery.

Can the grandkids watch?: If they’re old enough to follow the story, they’ll enjoy it.