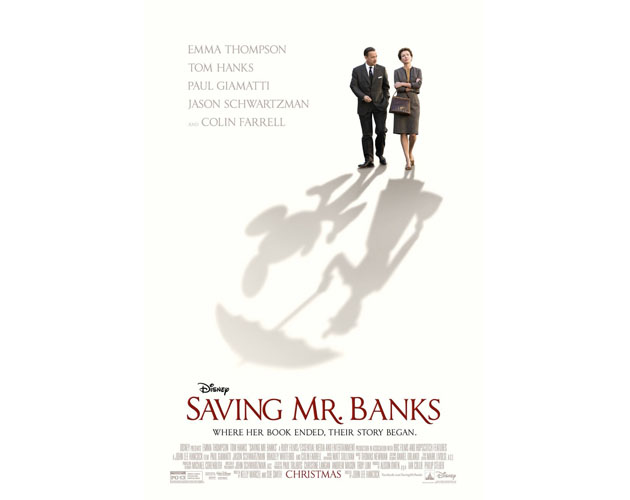 Choice Quote: “I opened the doors for Mary Poppins and who should be standing there but Walt Disney.” – P.L. Travers

The Hype: The culmination of Walt Disney’s 20-year pursuit of author P.L. Travers, his dream of turning her beloved Mary Poppins books into film, and her utter disgust at the thought of it. How does he win her over? Well you’ll just have to see the film…or read the review below.

The Reality: Right off the bat, lets get the obvious out of the way: while I did enjoy the movie (Emma Thompson, Zoomer’s current cover lady, is fantastic as author P.L. Travers, and Tom Hanks captures Disney) it’s important to remember that this is a Disney-produced film about the making of another Disney film, with good ol’ Walt Disney himself as a central character. So yes, there are moments, for example, when a lonely, emotionally-wracked Travers gets out of bed in the middle of the night and returns with a giant, plush Mickey Mouse doll to cuddle and soothe her into slumber. Or, in other words, a spoonful of sugar helps the Disney-fication of history go down.

Aside from this sort of caretaking of history (as one film critic noted, Walt Disney’s habit for chain smoking was conveniently left out of the film), Saving Mr. Banks is an intriguing, emotional, and witty look at the story behind the making of Mary Poppins.

Mr. Banks refers, of course, to the patriarch George Banks of Mary Poppins fame – a character based on Travers’ own father. Through flashbacks the film explores the author’s troubled upbringing at the hands of an alcoholic dad (Farrell), whose memory, and mistakes, Travers ultimately hopes Poppins can redeem – a storyline that also leads to revelations about Disney’s troubled childhood.

But making a Mary Poppins film doesn’t prove easy. Disney chased Travers for 20 years for permission to use her character – the fulfillment of a promise to his own children. Travers continuously rebuked him until her literary royalties dried up, and only then does she reluctantly make the trip to Los Angeles.

RELATED POST: Emma Thompson: I Wanted To Be The Doctor

“Mr. Disney, I cannot explain to you how positively sickened I am at the thought of visiting your dollar-printing machine,” she exclaims bluntly when invited to visit Disneyland with the creator himself. It kind of gives you an idea of what Disney was dealing with.

Thompson’s outbursts are often hilarious, such as her decree that the colour red not be used at all in the film because she’s “gone off it.” And no singing. And no Dick Van Dyke. And certainly no animation.

The painstaking process of winning Travers over falls partly on the Mary Poppins script co-writer Don DaGradi (Whitford) and sibling composers Robert B. and Richard M. Sherman (Novak and Schwartzman), with whom the author argues back and forth about everything from storyboards to song lyrics – tussles that prove to be some of the highlights of the film.

Giamatti is almost a living, breathing Disney character himself – a human-version of Goofy crossed with Mickey – as Travers’ driver Ralph, but he’ll win you over by the end.

And it’s the end I found quite interesting. You’d think everything would be wrapped up in a nice little Disney-brand bow, but it’s not. Travers isn’t invited to the premiere of the film in Hollywood, and, lo and behold, there’s animated penguins AND Dick Van Dyke in the film (not to mention the colour red). And if you want to find out just how unhappy Travers was with the final product (including what they don’t show you in the film) you can see for yourself here.

If you can get past the glossy Disney packaging, Saving Mr. Banks is an enjoyable film that Thompson takes by force, carrying it on her shoulders as Hanks and Co. offer support. You’ll like it. Just take it with a grain of…er…sugar.

Can the grandkids watch?: It would probably help if they’re familiar with the Mary Poppins film, as they’ll recognize the music right away. The flashbacks to Travers’ troubled upbringing may be a little heavy for little ones though.

Saving Mr. Banks opens today in some theatres, and across Canada December 20th.