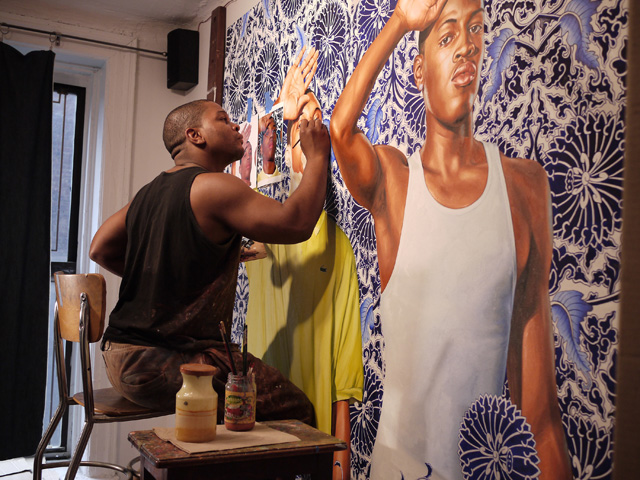 The Reel Artists Film Festival (RAFF) kicked off their 11th season at the TIFF Bell Lightbox in Toronto, offering a sneak peak at this year’s cinematic selections.

The festival, presented by the Canadian Art Foundation, serves as the only North American celebration of visual arts and artists through documentary film. In total, 19 films will screen over five days with many featuring panel discussions with the artists and/or producers.

The festival kicks off on February 19 with the world premiere of Kehinde Wiley: An Economy Of Grace, which documents the New York-based artist as he enlists African American women he meets around the Big Apple, outfits them in Givenchy gowns, and paints portraits of them in the style of 18th and 19th century artwork. The screening is followed by a conversation with Wiley led by Zoomer magazine Editor-in-Chief Suzanne Boyd.

“(Wiley) is a very exciting, rising star in the art world,” Samara Aster, RAFF’s Program and Outreach Manager, said during the preview. “He’s a special kind of artist.”

Other highlights of the festival include:

*  The North American premiere of Artists on the Underground, which follows a number of artists in their attempts to design the cover of the map for the Underground Tube in London.

* Fifi Howls from Happiness, a revealing, conversational portrait of 79-year-old Iranian artist Bahman Mohassess from his hotel room in Rome.

* Chimeras, an up close look at China’s contemporary art scene.

* Nan Goldin – I Remember Your Face follows the legendary photographer as she discusses her career and reconnects with old friends around Europe.

* Levitated Mass, a look at the excitement and logistics surrounding the 10-day long transportation of a massive granite boulder as it journeys across California to its place in a unique Los Angeles art installation.

The RAFF runs from February 19-23 at the TIFF Bell Lightbox. For more information on the films and related events, click here.