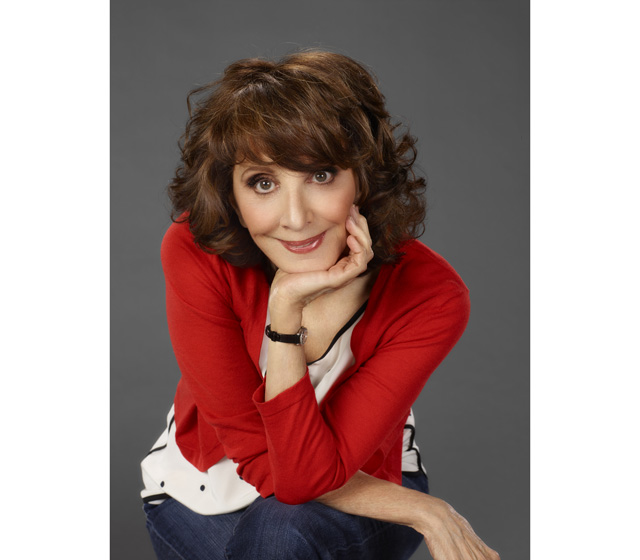 I’m sitting at a table at a Chinese buffet in Toronto’s east end, having just piled onto a plate what is no doubt more fried noodles and chicken balls than the average human is meant to consume in one sitting. I tell a joke to my niece and dangle my fork over the mound of food, but before I take a bite my phone rings.

“Hi Mike, this is Andrea Martin,” says the voice on the other end. “How are you?”

I nearly dropped my chicken ball.

There are countless Canadian celebrities – we’re talking the Jim Careys, Pamela Andersons, and Mike Myers of the world – who Americans often mistake for one of their own. But Andrea Martin may be the only American celebrity people assume is Canadian.

“There are many times when I think I’m a Canadian,” Martin, 67, laughs when I bring it up, this time in a second conversation during a rehearsal break from her upcoming Broadway show Act One.

RELATED: Il Divo Quiz: Are You a Broadway Boomer?

“You know, everything that was important in my life began in Canada. My career really started there, and I got married to a Canadian, and my kids were born in Toronto. I have a place there that I bought a few years ago, and I lived there [before that] for 18 years.”

Her down-to-Earth disposition and sincerity – two very Canadian qualities, we Canucks like to think – may also have something to do with it. The Chinese buffet story is a perfect example: she unexpectedly needed to reschedule our upcoming interview but, because it was the Family Day holiday in Ontario, she was unable to get in touch with anyone to pass the message onto me. So she called me herself, devoid of any ego or drama that might be expected from an internationally renowned performer who, in 2013, won a Tony Award for her starring role in a recent Broadway production of Pippin. “You have my cell phone number now,” she laughed after we’d made the arrangements, “so we’re practically best friends.”

A few days later, Martin, born and raised in Portland, Maine, recounts her showbiz beginnings – just two weeks out of college she landed the role of Lucy in a 1970 travelling production of You’re a Good Man, Charlie Brown. Canadian actor Derek McGrath played Linus, and Martin fell for both him, and his hometown of Toronto.

“You know, it’s like anything you do – you’re not aware of the impact it has on your life until after, when you look back,” Martin says of the experience. “It was a great way to start out, and of course the people who are still alive are still my friends from that show.”

Speaking of impact, in the late 1970s Martin found herself a part of another ensemble cast of no-name actors, including John Candy, Catherine O’Hara, and Harold Ramis, on a little sketch comedy show you may have heard of: SCTV. The rest, from Broadway to My Big Fat Greek Wedding, is, as they say, history.

“Now I’m in New York doing a play and I think, ‘How fortunate am I?’ I just feel that honest to God it’s never too late,” Martin admits. “When I turned 65 is I said to myself ‘You don’t have any more time to indulge in the kind of negative things that might have held you back.’ So I just decided to say yes, to everything, and to life. You know, things change on a dime when you say yes.”

That’s what happened when the opportunity arose to return to the small screen. The concept was a comedy about a woman, with no legal background, who takes over her late husband’s law practice, called Working the Engels.

“My agent sent me the script and it was hands down the best script that I had read,” Martin says.

A joint Canadian and American production shot – where else? – in Toronto, the show features guest spots from Martin’s fellow SCTV alum Short and Levy, as well as other Canuck talents like Colin Mochrie, Scott Thompson, and Wendy Crewson (“Yes, it’s fabulous to get names on it, but more importantly it was just all people that we loved”).

Martin returns to television at a time when more female comedians – from Tina Fey and Amy Poehler to Ellen DeGeneres, Mindy Kaling, and Chelsea Handler – command a much bigger share of the spotlight than in previous generations.

“I think that’s really true. I don’t ever remember two women hosting an award show,” she points out before noting that it wasn’t for lack of talent. “There certainly were (great comedienne’s) – Gilda, and Jane Curtain, and Catherine O’Hara – but that part of it has changed.  I don’t know why it changed. There were always opportunities. You know, Hollywood’s just based on what works. Something obviously worked, and then there was an audience for it. But I don’t know if it was a concerted effort by Hollywood to shift genders and give women a chance.”

Martin, humbly, omitted her own name alongside Gilda, Curtain, and O’Hara, though she certainly ranks among them, which is why I wanted to know what, in her opinion, is the key to creating something funny?

“There’s always a foundation of truth,” she replies. “In vaudeville, when you’re walking across the stage and you slip on a banana peel, why everybody laughs is that the character is just so deeply thrown when he falls on the banana peel. He’s really embarrassed. Comedy’s just a little more heightened.”

Here’s a tip, if you ever find yourself in conversation with Martin: don’t bother mentioning the word “retirement.”

I did, and she enjoyed a hearty laugh. “That is so crazily not a part of my vocabulary.” Makes sense – this is, after all, a woman who, in her mid-sixties, to prepare for her turn in Pippin, enrolled in circus school “to get strength in my arms that I’d never had before because I had to hoist myself up the ropes and hang onto my partner as I was upside down with my hands.”

“I actually feel that I have much more of an ease and self-confidence in this chapter of my life and I want to utilize it while I’m feeling so fearless about what people think,” she rationalizes. “Those parts always came to me but I said ‘no’ many times in my career, and when I was saying no I believed I was saying no for creative purposes. When I look back I think I was saying no because I was scared. And now I thank God the opportunities are still there.”

Of course, there are the roles Martin regrets she won’t have a chance to tackle at this stage in her career – “I’m sad that I can’t play Serafina in The Rose Tattoo, but I’m too old now. I wish that I’d had the courage [when she was younger] that I have now, because I could embody that part” – but that doesn’t mean she’s slowing down.

Aside from Working the Engels and Act One, she’s appearing in the film Night at the Museum 3 alongside Ben Stiller, has a book of humorous essays, Lady Parts, due out in September, and is signed on for the lead in a Roundabout Theatre production of Noises Off next December.

“That’s a really challenging part and I’m just so thrilled to be able to do that,” Martin says of Noises Off. “So sometimes I guess I’m just open and things seem to be coming my way because every time I do something I’m just enjoying it much more than I might have in the past. Because in the past I was always fearful – what were people going to think – and now I don’t give a hoot.”