Popcorn Picks: The Trip to Italy 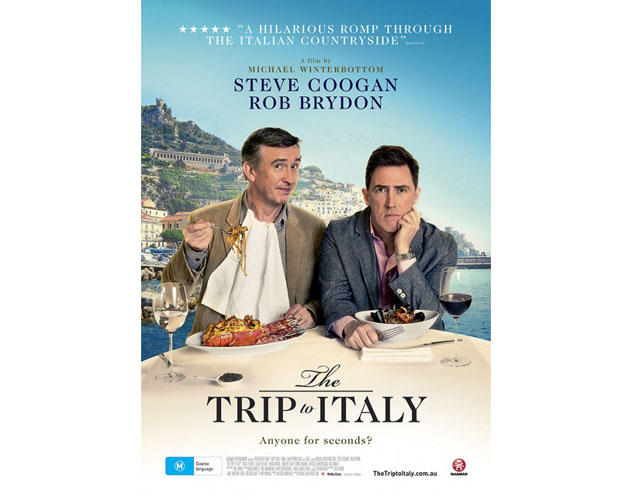 Choice Quote: Rob Brydon: “The one in the blue top looks like a younger me.” Steve Coogan: “He’s, like, the best surgeon in the world has been given a year with you.”

The Hype: British actor/personalities Steve Coogan and Rob Brydon (playing what can only be assumed or hoped as slightly fictionalized versions of themselves) are once again on the road. Following up their first trip for The Observer – fine-dining and lodging through the Lake District of England – the paper wants a companion piece from the best friends, but this time about Italy. Coogan agrees to accompany Brydon on the do-again only if the paper flies him first class from L.A. – a hint that Coogan hasn’t abandoned an inflated ego that just so happens to pair perfectly and create wonderful comedic tension with Brydon’s affable, happy-to-be-hapless-sidekick.

The Reality: Yes, it’s a sequel. Yes, it’s a buddy film. And yes, it works again if caustic humour and acerbic wit – who does it better than the Brits after all – is your bag. You don’t need to have watched The Trip to appreciate their Take 2. Some of the shtick may seem fresher if not in fact, but in this case the set-up makes the delivery that much more satisfying.

The cornerstone, as with their U.K. journey, is the duo’s banter. It’s sharp, critical, sometimes verging on something entirely inappropriate, always funny and even, on rare occasion, profound. The food and vistas, however delicious and stunning respectively, play backdrop to the pair’s back and forth, which comes across most times as one-up-manship. Not all fun and games, the film is not without a little mid-life crisis misadventure from Brydon (49) and aging-equals-post-peak melancholy from Coogan (48).

Refreshingly for the genre, it’s not all low-brow. The two quote poetry as easily as lines from their favourite films. Discussion and debate touch on Byron and Shelley throughout the film as Coogan and Brydon pay homage to both great British poets and their own time in Italy. But don’t be mistaken – the comedians can most often be found ribbing each other and discussing the merits of fellow actors (and Canadian musicians as it turns out) to the audience’s delight – like witnessing a behind-the-red-curtain gossip session.

And no one is safe from impersonation, from Bublé (yes, our own Michael) to Bond (all of them) and Sir Michael Caine, to the delight of those who witnessed the duo vying to do him best during their first trip. After all, like waiting to hear the band’s big hit during the encore, sequels strive to satisfy the itch hopefully left by the original. Mission accomplished.

Theatre or rental? Both. The views of the Italian coast and countryside are beautiful on the big screen and whatever you may miss while laughing through the first watch you can catch at home.

Can the grandkids watch? No (unless they’re 25-plus and have an appreciation for Brit com).