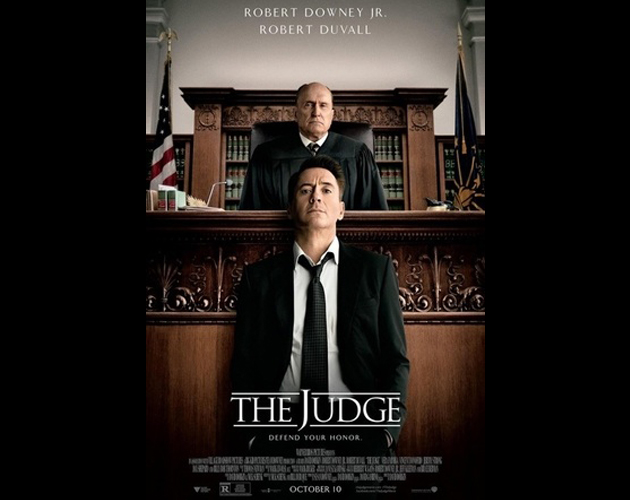 The jury has reached a verdict: guilty of multiple counts of cliché and involuntary manslaughter of the plot.

Choice Quote: “Everybody wants Atticus Finch until there’s a dead hooker in the hot tub.”

The Reality: Around half-way through the film we learn that Hank Palmer’s older brother Glen (D’Onofrio) had a promising major league baseball career ahead of him before an auto accident wiped out any chance he had at achieving greatness. That character arc also aptly sums up The Judge –all the potential in the world, but ultimately an underachiever.

It’s not for lack of quality performances – in fact, the duels between Hank and dad Joseph, who have a dysfunctional relationship to say the least, are among the highlights of the film.

That’s because they’re essentially the same character from different worlds –hard-headed, quick-witted, and brilliant. The difference is the elder stayed in Carlinville, Indiana, presiding over the local court firm in his conviction that integrity and the law rise above all, while the son moved to Chicago and prides himself on his ability to defend guilty clients and get them off scot-free.

The supporting cast is great as well, including the lovably innocent youngest brother Dale (Strong), but ultimately where the film falters is in the story.

It’s not hard to believe that a son would leave his job in the city to stay in his small hometown to defend his dad against a murder charge, but when he spouts comments like “I wish he’d died instead of mom” it’s tough to buy how easy it was to convince Hank to stick around. Meanwhile, Judge Joseph’s sense of personal justice and his own legacy become a little convoluted, while the courtroom scenes border on the predictable.

Kudos to the film for raising the trial’s stakes with new evidence halfway through, but the whole father-son moment of personal contrition that the Palmers share in court, when dad is on the witness stand and son is cross-examining him, should have raised a slew of objections from the prosecution, if not the viewers in the theatre.

Add to this the rekindling of a romance between Hank and his high school sweetheart (Farmiga), the backstory of which is almost as silly as the incestuous encounter we bear witness to near the beginning of the film, and the whole “big city lawyer rediscovering his small town morality” cliché, and you have a film with a great cast that should have offered far more drama and compelling story-telling than it did.

The Verdict: Guilty of multiple counts of cliché and involuntary manslaughter of the plot.