The Flannel Renaissance: Mapping the Year of (Neil) Young 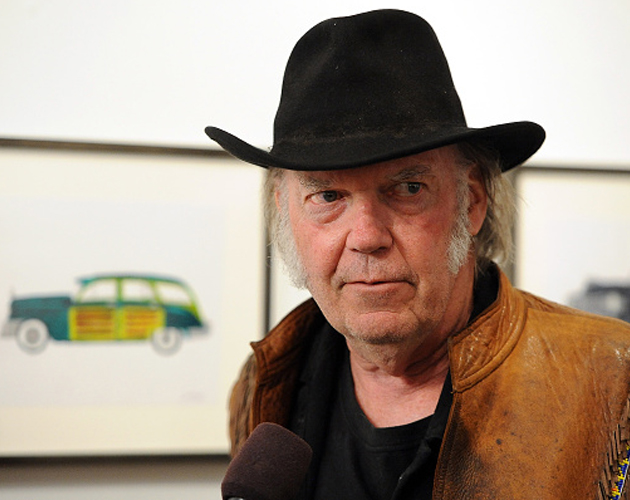 You might call it the Flannel Renaissance – the resurgence of yet another classic Canadian singer/songwriter into every vein of pop culture consciousness. The past few years belonged to Montreal troubadour Leonard Cohen, thanks to new albums, books, world tours, and award show success. But the flannel propelling the latest uprising comes courtesy of rocker Neil Young who, through a combination of both a passion to continually push creative boundaries while at the same time lend his voice to the voiceless, established 2014 as, unequivocally, the Year of Young.

The year began on a political note in January when Young called out the Canadian government on behalf of the Athabasca Chipewyan First Nation (ACFN), warning of the effects of the development of the Alberta oil sands on native communities and the environment as a whole.

“We made a deal with (the ACFN). We are breaking our promise. We are killing these people,” Young declared at a press conference at Toronto’s Massey Hall. “The blood of these people will be on modern Canada’s hands, and it will be the result of not just a slow thing, but of a fast and horrific thing if this continues.”

Young’s message gained traction and attention across the country. By April the headlines changed from oil sands to studio albums with the surprise release of his 34th disc A Letter Home – a covers album recorded with rocker Jack White on a near 70-year-old coin-operated Voice-o-Graph recording booth – on Record Store Day (April 19).

It’s an “an unheard collection of rediscovered songs from the past,” the singer’s website noted, “recorded on ancient electro-mechanical technology [that] captures and unleashes the essence of something that could have been gone forever.”

In June, Young joined Pretenders singer Chrissie Hynde on her first solo album, Stockholm, while in July he reunited with band mates Crosby, Stills, and Nash on The Tonight Show. In actuality, it was host Jimmy Fallon doing a dead-on impression of the singer with the band, performing a cover of Iggy Azalea’s Fancy, but it went viral nonetheless and kept his name top of mind. Later that month, the real Neil Young filed for divorce from his wife Pegi after 36 years of marriage.

Divorce can put a damper on one’s summer, but Young was back in the saddle in September, walking the red carpet at the Toronto International Film Festival before debuting the director’s cut of his 1982 film Human Highway. Following TIFF he released the first track from his latest album Storytone, called “Who’s Going to Stand Up?”, in three different formats – acoustic, live, and orchestral.

October, however, proved the high mark of the Flannel Renaissance. To start, two books about the singer dropped: Young Neil: The Sugar Mountain Years, by Sharry Wilson, and the car-memoir Special Deluxe, by Young himself.

Young also hit the talk-show circuit in support of the upcoming album Storytone, appearing on The Colbert Report where he performed a duet with host Stephen Colbert after declaring U.S. President Barack Obama should be impeached for fracking. “It’s not in the interest of the American people. . . I am part of the free world, and he is the leader of the free world!”

And when he wasn’t making or promoting his own music, Young worked to ensure other artists’ music sounds better. His Pono music device (think an iPod and music library built specifically to provide the best quality/sounding music possible) became available for pre-order.

Now, November sees the release of Young’s 35th studio disc, Storytone, available as both a solo album and another disc, as Rolling Stone noted, “gilded with orchestral and big-band arrangements, all recorded live with no overdubs, and Young singing in the same room as the musicians, Sinatra-style.”

“It’s the most different thing that I’ve ever attempted,” Young said in the same piece, demonstrating his willingness to, even late into his career, sacrifice his comfort zone in the service of music.

What Young has in store for the rest of the year is anyone’s guess, but after two albums (one a surprise), two books, high-profile activism and the first steps toward a revolution in how we listen to music, no one would blame him if he took time to rest. Still, something tells me the Year of Young isn’t quite through yet.

Mapping the Flannel Renaissance: A Year of Young Timeline

JANUARY: Young makes headlines protesting the effects of the Alberta oil sands development on the Athabasca Chipewyan First Nation and the environment as a whole. APRIL: Young surprises fans with the unexpected release of cover album A Letter Home, recorded in Voice-o-Graph recording booth. JUNE: Chrissie Hynde employs Young on her first solo album, Stockholm. JULY: Jimmy Fallon parodies Young in reunion with Crosby, Stills, and Nash on The Tonight Show; Young files for divorce from wife Pegi after 36 years of marriage. SEPTEMBER: The director’s cut of Young’s 1982 film Human Highway screens at TIFF; three separate versions of new Young song “Who’s Going to Stand Up?” are released. OCTOBER: Two books about Young are released – Young Neil: The Sugar Mountain Years, by Sharry Wilson, and Special Deluxe, by Young himself; Young appears/performs on The Colbert Report and declares U.S. President Obama should be impeached for fracking; Young’s ground-breaking music player, Pono, available for download. NOVEMBER: Young releases Storytone, his latest album, as both a solo effort and an orchestral album.