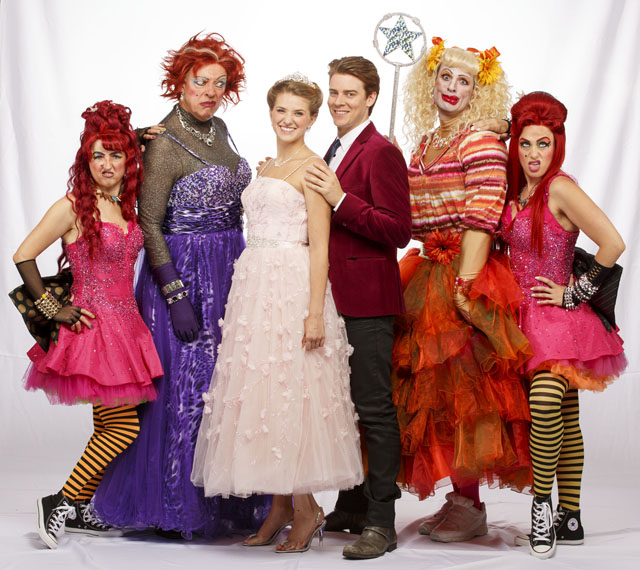 Petty, second from left, as the evil step-mother among the rest of the cast in Cinderella: The Gags to Riches Family Musical

Ross Petty reveals the one celebrity he asks to join his beloved holiday musical every year, and the reason the celebrity never does

Ross Petty, 68, may be best known for his beloved family pantos, which have injected some hilarity into Toronto’s bustling holiday season for the past 23 years. On the eve of his 24th production, Cinderella: The Gags to Riches Family Musical (in which he dons a dress to play the evil step-mother) Zoomer’s Mike Crisolago discovered there’s much more to Petty than fairy tale villains and getting booed on stage by an audience full of enthusiastic kids.

As a youngster in Winnipeg Petty “mapped out” his acting goals, so to speak…

“I had a map of North America on my wall and I had New York circled in red ink on that map because I always wanted to get to New York and I always wanted to be on Broadway. And happily I was able to achieve that dream. I’ve been a very fortunate guy along the way.”

“That was a musical theatre company that put on shows every summer in the park, and I just was so excited because they gave me a job…at $25 a week to be in the chorus, and I just loved it to death.”

There’s one specific celebrity Petty calls every year to invite him to star in his holiday panto, and every year this star politely declines…:

“On a yearly basis I call Marty Short and I don’t have to say anything to him. I [say], ‘Hey Marty, it’s Ross Petty,’ and he [says], ‘Are you calling to get me into one of your shows again?’ He always says the same thing. And I [say], ‘Well yes I am because I think you’d be perfect in them and the audience would just eat you up.’ And he [says], ‘Well, they sound like a lot of fun…[but] I spend most of my Christmas vacation in Hawaii or L.A. and I think that that’s going to continue to be the case.’ [Laughs] And I can’t really fault him on that one.”

On drinking with Kurt Browning: “He’s a very, very courageous young man. I’ve known Kurt for a long time because his wife is a prima ballerina in the National Ballet of Canada and, of course, my wife [Karen Kain] is the artistic director. One day I just said to him, “Hey man, you’ve got to come and do one of my shows.” And we went out for a night of heavy drinking [Laughs] and I finally convinced him at the end of that night that he would do Peter Pan. I think he was really brave.”

Memories of “Mr. Dressup” Ernie Coombs: “[He] did three of my shows. He was an extraordinary guy. I miss him to this day. He was just the sweetest man going.”

Meeting Bret “Hitman” Hart: “I remember meeting Bret for the first time…about a year before we were doing Aladdin and I [wanted] him to play the Genie. He just turned out to be a gentle giant. I think because he had been treated so badly by the World Wrestling Federation [now known as World Wrestling Entertainment] and Vince McMahon, that his experience with us was where he was a contemporary performer who was treated with great respect. And I think he loved the fact that he was performing for kids and families. It was great to have Bret with us.”

Working with his wife, Karen Kain:

“Of course my wife did several shows … and what a treat to be able to work with Karen because a musical theatre performer and a ballerina hardly ever find the right vehicle to work together on. [Laughs] And yet these shows are so kind of fractured and the elements of what everyone’s talent is all can come together under one roof.”

He wants your kids/grandkids to let loose at his shows:

“We don’t expect them to be good, quiet little boys and girls. [Laughs] I see a lot of parents taking their kids to the theatre and they’re always keeping their kids quiet. And kids always want to ask questions, or run up and down the aisle, or whatever. And in any other theatre form that’s a no-no. When they get to our show they can let loose. That’s the beauty of giving the kids that kind of first-time life experience of one of our shows and then they become hooked on live theatre from that point forward.”

“Until I drop onstage? [Laughs] What a way to go, huh? I come out on stage and the audience boos and I drop. And they’ll say, ‘Oh, if only we hadn’t booed so loud maybe he would still be with us.’ … I’m getting to be a certain age, so I keep thinking about when it’s time to hang up the dress, as it may be. I hope to do another couple of years as a performer, but I intend to keep producing the shows because after all the years I’ve been doing them, and having created this great family tradition, it would be terrible to have to not do them anymore.

After creating countless holiday memories for others, his own favourite involves some yuletide R&R:

“Its been so long that I’ve been doing these shows that my Christmases of the past 25 years almost really become a blur to me because we happily have Christmas Day off. Because Karen is always involved with The Nutcracker that time of year, with the ballet, we just kind of crash. We’re just both so exhausted at home, and we do somehow manage to get together with our families and kind of get through dinner and then go home and crash again.”