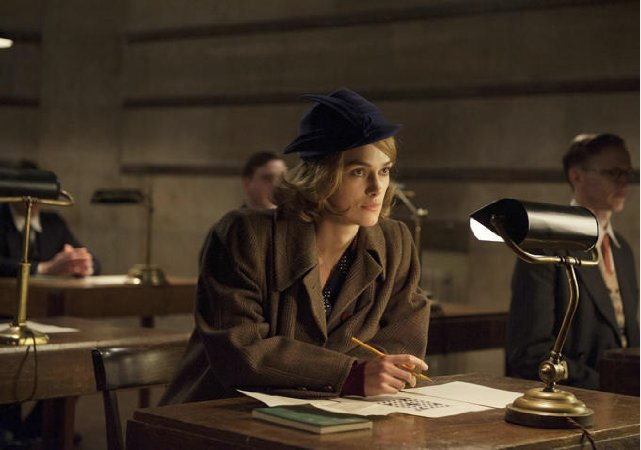 Winner of The People’s Choice Award at this year’s Toronto International Film Festival, The Imitation Game is being touted as a heavy-favorite for a Best Picture Oscar come March. Aside from having award-season-impresario Harvey Weinstein as a producer, the film also stars man of the moment, Benedict Cumberbatch in the role of Alan Turning, the math genius who is credited with inventing the computer as well as breaking the Nazi’s secret code, Enigma, and thus saving millions of lives and bringing the second world war to a sooner end. But when the Academy Award nominations are announced in January, don’t be shocked if co-star Keira Knightley, 29, (previously nominated for Pride & Prejudice) gets a supporting actress nom. She portrays Joan Clark, a woman with her own skilled mathematics brain who joins the top-secret group to break the code, becoming temporarily engaged to Turing in the process. We sat down with Knightley during this year’s Toronto International Film Festival to discuss her role and the importance of the Turing story.

ZOOMER MAGAZINE: How do you choose your roles?

KEIRA KNIGHTLEY: I just go with whatever interests me. If I find somebody fascinating, in a story that is incredibly intriguing then it’s that. I don’t like, nice, simple, easy sort of characters. I’m always looking for someone I want to explore.

ZM: What in particular attracted you to Joan?

KK: I think it was much more wanting to be a part of telling the Alan Turing story. And I think that is the same with most of the cast members and the creative. It’s an incredible ensemble cast, with a lot of actors who have come in to do really small roles who play leads in their own right. I think for everybody it felt very important to get this story out to as big an audience as possible. I first read about it about five years ago, in an article in The Guardian, when they were trying to push for his pardon. And I remember thinking I can’t believe I didn’t know anything about this. It’s completely shocking. As soon as I heard there was going to be a film I didn’t know what size the part was going to be but I just wanted to be a part of it. And then they offered me Joan and actually the part was a lot smaller, which I said yes to, and then they wrote it up after that. It was much more a part of wanting to get the story out.

ZM: Why was this film so important to get out?

KK: I think it’s still so relevant. If prejudice is allowed to influence government policy, as is going on all over the world, it’s a very easy thing to gain votes on, then tragedies occur. That’s exactly what happened with Alan Turing. No one knows what he could have given the world had he been allowed to live longer, had he not been persecuted by the government.

And equally from Joan’s point of view, the sexism that she experiences is still very much prevalent to what women are fighting for today. She was fighting for a place at the table and what isn’t covered in the film is once she was there she was paid a fraction of what all of the men are paid. And they made her into a linguist even though she couldn’t speak any other language apart from English because she could get a tiny bit more money. So equal pay and a place at the table are still very much feminist issues. I was really struck by that in the script. That as much as it’s about the Second World War, a lot of the things in the Second World War could very easily happen again. And indeed you look at the society of the First World War; it’s very similar to what we are now. Today it’s very dangerous times. So why do you look back at other dangerous times? Perhaps because we’ve never ever learned from the past mistakes that we’ve made before and maybe we should start.

ZM: In the film your character wants to marry Turing even after he tells her he’s a homosexual. Given the era it seems a viable option.

KK: I think I can completely understand making the decision to go for friendship and partnership and I think a lot of people have done. I think there have been a lot of marriages between gay men and straight women or indeed gay women and straight men because you choose that partnership, that sense of family and if you have a meetings of minds, as I think they did. And particularly at that time, when really what she was looking at if she’d married someone else was being chained to the kitchen sink and what she loved was mathematics and she was fascinated and obsessed by it. If she had a life with him [Turing] then she could explore all that and if she was with someone else she couldn’t. So I can completely understand that decision. And even when he says, “I’m gay,” to say, “that’s fine, it doesn’t matter.”

ZM: Did you do a lot of research into math and crosswords?

KK: No. I’m terrible at all of that. But what I understood was that sort of passion and that kind of total immersion in that world. Anyone who is creative is like that. I have a couple of mates who are mathematicians or have done degrees in higher math and they see it as incredibly romantic and incredibly creative. So I could understand it from that level without being able to understand anything they were actually talking about.

ZM: In your personal life you’ve tended to stay out of the social media frenzy compared to other actresses your age. Do you avoid it?

KK: As far as staying away from the fray and the social media, I’m just not really interested in it so it’s very easy.

ZM: It makes you more mysterious…

KK: I’m an enigma! How fun! How brilliant. It is quite interesting at the moment because of the way people communicate. A few years ago you had to be incredibly protective of your privacy because everyone wanted a piece. Now so many people are happy to share such an incredible amount you can choose not to be a part of that and suddenly be much more private.

ZM: You’re a Chanel model and are a red carpet favorite. How much does fashion come into your real life?

KK: In my everyday life, not so much. I really enjoy it. I enjoy getting dressed up for roles. I like playing dress up. In my everyday life and possibly because I do it for work I’m absolutely no make up, barely brush my hair, in dungarees, DM boots and sloppy jumpers and that’s about it.

The Imitation Game is in theatres now.