Between the Lines … with Clement Virgo and Lawrence Hill, Talking The Book of Negroes 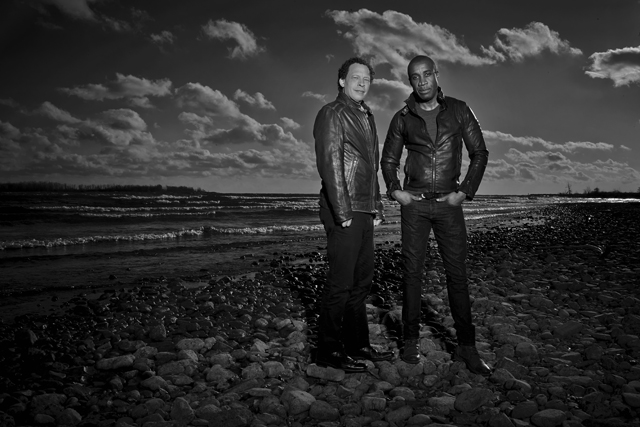 Author Lawrence Hill and director Clement Virgo sat down recently to discuss adapting Hill’s award-winning novel The Book of Negroes for the small screen – a mini-series that’s proved a ratings hit on CBC. Zoomer’s Mike Crisolago was there to take it in.

Below are some quick cuts from the conversation. For the full story, see the March 2015 issue of Zoomer magazine.

From the Page to the Screen

LAWRENCE HILL: Not every novel has the possibility [to be made into a film]. If it’s an extraordinarily internal novel, interior thinking, that increases the difficulty of transforming that to screen. Generally speaking, your novel has to have had a certain amount of commercial success just to increase the likelihood that somebody might want to buy the film rights. It’s an economic imperative. Most novelists don’t have a lot of dough, so they think about, “Well, if somebody bought the movie rights I’d have some more money.” But also, it kind of legitimizes the writer in the eye of the world because if somebody develops your work into a film or a miniseries it means that maybe you’re a little more legitimate than you were before.

The Language of Race

CLEMENT VIRGO: I’ve got to be honest with you Larry – when I heard about your novel I didn’t think I would want to even read it simply because of the title. It’s my own issues, my own sense of, “Okay, what does “book of negroes” actually mean?” But of course, once I read it, it makes perfect sense. I know I had my own aversion to the word “negro,” maybe because it’s so connected to that other “N” word.

LH: Obviously I don’t use the word “negro” in my day-to-day speech. One of the challenges with language that tries to define you as according to your so-called race is that it’s always going to fail. I mean, my father called himself a negro proudly because he was born in 1923 as an African-American [and] … “negro” was considered relatively neutral and polite in the 1950s, 1960s, even through the 1970s. But one of the challenges, I think, of language that purports to do the impossible, which is to define you by race, is that it’s always changing.

CV: In America, I know that when the book came out it was called Someone Who Knows My Name. Obviously a lot of Americans had the same sense of aversion that I had to the title. Was it difficult as a writer to suddenly have to be forced to change your title?

LH: Well, it’s difficult. It happens to writers all the time. One of the compromises – it was sort of forced on me – was that initially, the American publisher would not take it [with] the word “negroes.” They had planned to. I don’t know if I ever told you this – about three or four months before going to print they released a catalogue with the title The Book of Negroes. That’s how committed they were to it. But … bookstores in America were refusing to place advanced orders for the book because the word “negroes” was in the title. So that led to their decision, at the 11th hour, to change the title, even after they had released a catalogue with the word The Book of Negroes in it.

Aminata’s Journey – the Intersection of History and Entertainment

CV: Do you anticipate, Larry, that people [approach the story] in terms of a sense it’s going to be a history lesson for them, or a sense that this character is so interesting and this story is so interesting [that] that’s the access point for them?

LH: I think their primary access point is the story, but I think many people have told us that they do appreciate the history underneath it … I, personally, am happy to see [the mini-series] start outside Black History Month because sometimes people in Canada are so obsessed with Black history they think that the only time you can talk about it is in February. I’ve actually had school’s tell me, “Could you come speak to us in February?” And I’ll say, “I’m sorry, no, my February is full. Could I come in March?” “No, no, we don’t want you to come in March. That’s no good. It was only February that interests us.” And that really says a lot about the way we want to contain, I think, sometimes, discussions of Black history. So sometimes I’m actually delighted to be able to speak about Black history, or to speak about the book or the miniseries outside of Black History Month.

CV: I know for me, when I read the novel, finally, it was that Aminata is such an interesting and compelling character. We have a character that is so amazing, and then at the same time you get a love story and you get all this wonderful history. It’s a road movie like, say, The Wizard of Oz and she’s almost like a Forrest Gump character, where she intersects with history.

LH: She does. And I think we both share a preoccupation with not slipping the viewer, or the reader, some bitter pill of medicine. No reader, or viewer, wants to be preached to, or slapped around and told this is what to think, or how to feel. So you have to develop your drama and make it interesting and, as you say, smuggling some interesting nuggets as you go, but not make them feel like they’re lessons to be learned. That’s very pedantic, and people don’t like that. We have to entertain.

The Book of Negroes airs Wednesdays at 9pm on CBC.