Between the Lines: Jane Urquhart on “The Night Stages” and Loving her 60s 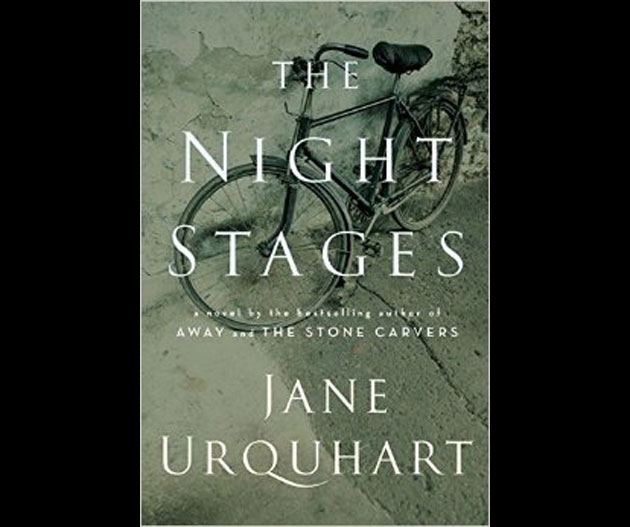 Award-winning Canadian novelist Jane Urquhart talks her new novel, The Night Stages, her writing process and why she loves being in her 60s with Zoomer’s Mike Crisolago.

MIKE CRISOLAGO: Your upcoming novel, The Night Stages, brings four main elements together: rural Ireland, a mural in Gander Airport by Kenneth Lochhead, an Irish bicycle race, and a female pilot during the Second World War. What’s your process for combining these very different elements to form the story?

JANE URQUHART: It’s always difficult to explain because my books seem to come from 11 different directions at once. So writing them is a kind of act of faith that eventually it will be revealed to me what all these things have in common.

And what I learned is that I just have to trust that. That if I’m that interested, there has to be a reason and that that linkage will present itself as I work my way through the first draft of the book. The revelation takes place during the first draft as to what it is that links these things.

MC: Why did you choose to include the mural in the novel?

JU: I think a novel is very much like a mural. A mural is not the kind of work of art that you look at directly, all at once. You have a tendency to kind of read it from left to right. And I thought that it would be interesting to have somebody in front of a work of art for what would be considered a pretty long period of time – two or three days – examining the work of art and allowing it to come into their consciousness and reveal things to them about a story that they’re remembering. I was also interested in the artist himself, and so I wanted to follow his path to the mural, to a certain extent, and hopefully there would be echoes within his stories that would relate to the story of the protagonist.

MC: The World Wars play significant parts in a number of your best-known novels, including this one. Do those events represent something more significant to you?

JU: I think so because they were hugely significant events. But I believe it’s less about the wars themselves and more about what the wars caused to happen … I think that, generally, it’s the sort of echoes that the war causes, that have an appeal for me. I don’t believe I’ve ever written a real battle scene.

MC: Do you hope to one day?

JU: No, I don’t long to write a battle scene. [Laughs] I think that that’s better left to the real historians – the fact-driven people.

NEXT PAGE: Jane on aging, her writing process, and being a grandmother…

MC: More than a decade ago you declared in an interview how much you enjoyed being in your 50s, and the confidence it brought you. How have your 60s been?

JU: Even better. I feel so grown up. It’s such a pleasure to be grown up. I was the youngest by quite a bit in my family – my next sibling is nine years older than I am – so for a long time I was the youngest anywhere. And that has finally changed. [Laughs] And so I’m kind of grateful for that in a way … I was almost going to say that the 60s changed a little bit – in other words, many of us are more youthful than our parents would have been.

The other thing that I like about being in my 60s seems contradictory in a way, and that is that I’ve sort of lost some energy. And that’s turned out to be a good thing, because I now know how to focus on the things that really matter. I just don’t have the energy for sort of superfluous nonsense. [Laughs] But I’m in terrific health and I’m having a wonderful time. And my husband’s 15 years older than me, so that means I’ll be young forever.

MC: Creatively, does the way you approach your writing change as you get older?

JU: I think it does a little bit. And again, I think it has to do with that energy. When I was younger, it was as if a dam were bursting [when she was writing]. It was kind of fast and furious and exciting – very exciting. But I think it’s wider and deeper now. So I’m not quite as fired up when I approach the paper or the keyboard or whatever, but I’m more reflective I believe…And you’ve read wider and deeper as well. So you just know more – it’s that simple.

MC: Tell me about being a grandmother.

JU: There are two little ones, and then I have a whole slew of step-grandchildren as well. All the kids are wonderful. Speaking of energy and creativity – it’s just such a pleasure to be around them, even when they’re bad. It’s kind of wonderful to watch a child have a temper tantrum. There’s no restraint. I think, “Look at that. That’s the real thing. What you see is what you get. They are really angry and now they’re going to show you.” And so I just love it.

Jane Urquhart’s The Night Stages is available in stores and online April 7.