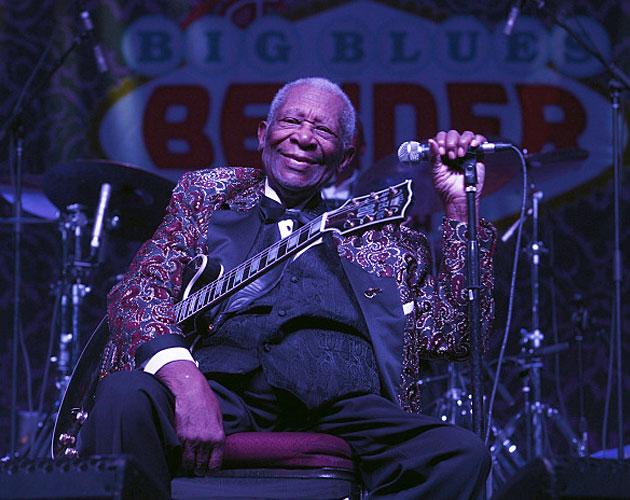 “When I do eventually drop, I pray to God that it’ll happen in one of three ways. Firstly, on stage or leaving the stage, then secondly in my sleep. And the third way? You’ll have to figure that out for yourself!” – B.B. King

B.B. King, the undisputed “King of Blues” who infused his distinctive voice and guitar-picking style with the soul of every road he ever travelled—from the cotton plantations of the Mississippi Delta to a performance at the Vatican—has died at the age of 89.

King’s attorney Brent Bryson confirmed the music legend passed away peacefully in his sleep on Thursday evening while in hospice care in Las Vegas. King battled diabetes for years and suffered from complications from the disease, as well as high blood pressure, in recent weeks.

Though he accumulated countless awards and honours—including 15 Grammy Awards plus one for lifetime achievement, inductions into both the Rock and Roll and the Blues Halls of Fame, an honorary doctorate from Yale, and the Presidential Medal of Freedom in 2006—the greatest accomplishment of King’s near-seven decade career may be, in the words of blues historian Edward M. Komara, that he “introduced a sophisticated style of soloing based on fluid string bending and shimmering vibrato that would influence virtually every electric blues guitarist that followed.” He is considered one of the greatest guitarists of all time, ranking as high as number three on a Rolling Stone compilation.

Born Riley B. King on a Mississippi cotton plantation on September 16, 1925, King was raised by his grandmother. From childhood into his teen years he performed around Mississippi in church choirs before travelling with fellow guitarist Bukka White to Tennessee. By 1948 he began making a name for himself and a year later he cut his first record. He’d also earned the name “Beale Street Blues Boy,” from which came “Blues Boy” and eventually “B.B.”

Influenced by the electric guitar of legendary blues artist T-Bone Walker, King famously named his own guitars “Lucille” following a fire during one of his shows in which two men, who were fighting over a woman of the same name, perished. King chose the name to remind himself “never to do anything that foolish.”

“… sometimes when I’m blue, seems Lucille tries to help me, calls my name … She’s just like a woman, and that’s the only one I’ve had that seemed I could really depend on. I’ve been married and each time separated from my wife, but Lucille never separates from me. She always stayed with me,” King noted in his 1968 album, Lucille. He claimed his beloved guitar had saved his life several times, including during an auto accident. “The car stopped turning over, it fell over on Lucille and it held it up off of me,” he said of the incident.

Most of King’s Lucille’s were a Gibson ES-355 or similar models.

King’s earliest success came in the 1950s with the release of “Three O’Clock Blues,” “Woke Up This Morning,” “Every Day I Have the Blues,” and “Sweet Little Angel,” among many other successful singles. By the 1960s, King befriended one of his favourite artists, Frank Sinatra.

“Of all the musicians that King had the pleasure to either work with or simply know, his favorite was Frank Sinatra,” it’s been noted. “King has spoken many times to how Sinatra helped to open doors for black musicians, and it was Sinatra who got King into his first gigs in Las Vegas during the heyday of the Rat Pack in the 1960s.”

In 1971 King won the first of his 15 Grammy Awards, for his classic “The Thrill is Gone.” His final Grammy came in 2009, where his disc One Kind Favor won Best Traditional Blues Album.

His reputation for his massive touring schedule grew early in his career when he’d routinely perform between 200-300 dates a year. It’s estimated that, overall, King played around 15,000 shows. As a result, his two marriages suffered. King and his first wife, Martha Lee Denton, divorced in 1952 after six years of marriage. In 1956, King reportedly played 342 shows. In 1958, King married Sue Carol Hall. The couple divorced in 1966.

The blues legend continued to tour in various capacities for the rest of his life. In 1997 he performance for Pope John Paul II at the Vatican for Christmas. He also played festivals around the world and performed and recorded with artists as diverse as U2, Gladys Knight, Eric Clapton, Carol King and Cyndi Lauper. At a performance at the White House in 2012, he jammed with President Barack Obama. King toured all the way until late 2014, when health issues forced him off the road.

A number of celebrities took to social media to mourn King’s passing, including:

Eric Clapton: “I want to thank him for all the inspiration and encouragement he gave me as a player over the years and the friendship we enjoyed … There is not a lot left to say because this music is almost a thing of the past now and there are not many left who play it in the pure way that BB did. He was a beacon for all of us who love this kind of music and I thank him from the bottom of my heart.”

Gladys Knight: “What a brilliant man you were. One who will forever be noted as such an inspiration to millions globally, RIP #BBKing”

Lenny Kravitz: “BB, anyone could play a thousand notes and never say what you said in one.”

Lee Brice: “B.B. King. My heart just broke into a million pieces. Not enough space to describe my feelings of the man.   Legend, pure, real, teacher..”

Fellow blues legend Buddy Guy, 78, posted a photo on Instagram of he and King playing together along with this statement:

“This morning, I come to you all with a heavy heart. BB King was the greatest guy I ever met. The tone he got out of that guitar, the way he shook his left wrist, the way he squeezed the strings… man, he came out with that and it was all new to the whole guitar playin’ world. He could play so smooth, he didn’t have to put on a show. The way BB did it is the way we all do it now. He was my best friend and father to us all.

I’ll miss you, B. I love you and I promise I will keep these damn Blues alive. Rest well.

King is survived by 11 children (though some report he fathered 15) and a reported 50 grandchildren.