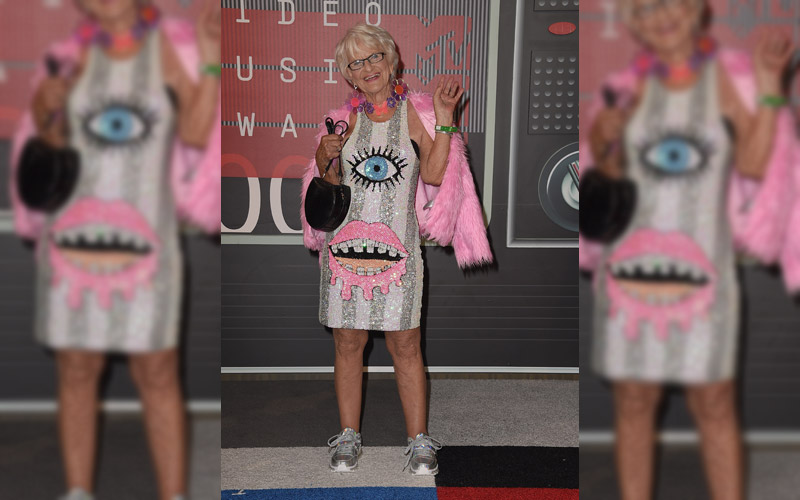 She was probably the oldest person in attendance and, by the looks of it, was having the time of her life.

That’s right: the Kentucky native is an Internet sensation who counts Drake, Rihanna, Beyoncé and Miley Cyrus as followers on her social media sites.

Baddie, whose real name is Helen Ruth Van Winkle, became famous when one of her teenage great-granddaughters helped her sign on to Twitter a year ago and took to wearing some of the teen’s clothing. It went viral, and soon Baddie was dressing in outrageously colourful outfits, developing a fierce grandma persona and having a tagline that said, “Stealing your man since 1928.”

For Baddie, it was a way of having some fun and dealing with the passing of her husband, she once said.

A few months ago, she was hired to front the ad campaign for a clothing line in L.A. called Dimepiece, which included modelling bathing suits.

And it looks like Baddie’s popularity is continuing to grow, having been invited to hang out backstage with one of her own fans, the renown badass teen herself, Miley Cyrus, who was hosting the VMAs.

Wearing a colourful tracksuit with the word “dream” emblazoned on the front, it looks like the Internet’s favourite octogenarian’s message to the world is just that – you can never be too old and continue to dream big.

DREAMING IN LA (outfit by @discountuniverse )

LOVE YOU @mileycyrus 💚🌈 TUNE IN TONIGHT FOR THE VMAS ON @MTV