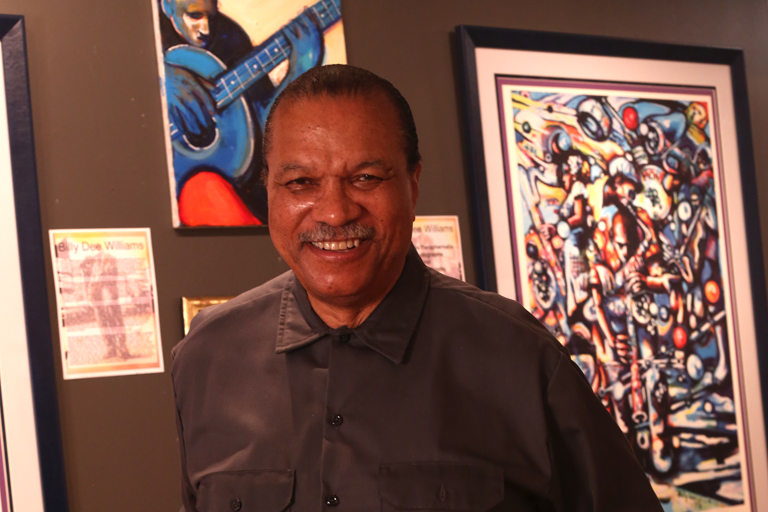 The Star Wars actor discusses his passion for painting with Zoomer.

Long before he gained fame aboard the Millennium Falcon, Billy Dee Williams channeled his own particular “force” through a different arsenal: his brush and palette.

Williams, 78, is best known for his roles in classics like Star Wars The Empire Strikes Back and Return of the Jedi, Lady Sings the Blues and Mahogany, though since childhood he’s also always harboured a passion for painting.

“My mother studied opera for years and I come from a family of cultured people … so my sister and I sort of grew up around all of that,” Williams said during a recent trip to Toronto in support of his art exhibition at Yorkville’s Liss Gallery. “The drawing and painting and theatre and the introduction of all of those kind of experiences started very early in my life.”

Influenced by everything from his love of music to Star Wars, Williams’ says he finds the process of painting “cathartic” when compared to the more collective work of making a film.

“When you’re painting you just lock yourself up in your little private world. And it’s all about you and your imagination and nobody else interfering with that. It’s a great exercise because you really start discovering who you are and what you are without a lot of assistance … and the moment you come up with something interesting it’s a success that’s really based on your own personal, private sensibility.”

Of course, even when he’s in town to promote his artwork, Williams doesn’t mind taking time to embrace fans of his other claim to fame: Star Wars. Famous for his role as Lando Calrissian, he’s happy to chat about his time in a galaxy far, far away. Just don’t make the mistake of calling Lando a “traitor.”

“It’s amazing that I spent my whole life trying to justify this crazy character’s life,” Williams laughs. “I used to pick my daughter up from elementary school and I’m out in the middle of the school yard arguing with little children. They’re all accusing me of betraying Han Solo. I’d get on an airplane and I’d have airline stewardesses saying I betrayed Han Solo. I’ve got kids today –I was doing a Q&A, I had one kid that stood in front of the microphone and said, ‘You betrayed Han Solo!’ The kid scared the hell out of me. I thought, if this kid had a gun I would have been dead … But I find it absolutely amusing. It’s just acting. I didn’t write the character. I’m just doing my job. I guess if I’m being successful I guess that’s a good thing. I might get KILLED but that’s alright.”

A display of Williams’ art, which also hangs in the Smithsonian Institution and the National Portrait Gallery, is on display at the Liss Gallery until Sept. 26. For more information, visit www.lissgallery.com/billy-dee-williams/.