Leonard Cohen’s Discs By the Decade 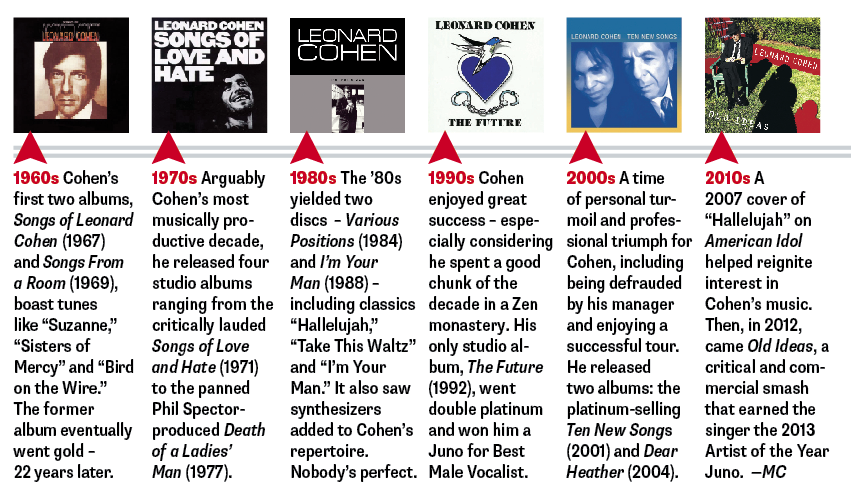 Happy 81st Birthday, Leonard Cohen! Here, in celebration of the anniversary of his birth (Sept. 21, 1934) a graphic look at the albums, over the decades, from one of Canada’s most iconic artists.

It’s a testament Leonard Cohen’s popularity that, in Canada, a new album from the beloved troubadour is greeted by fans with similar enthusiasm and joy as a hometown hockey team making the playoffs.

In fact, his first album, Songs of Leonard Cohen, was released the same year the Toronto Maple Leafs last won the Stanley Cup. Though, unlike the Buds, he’s rarely let his fans down since.

Coming off, arguably, the most important album of his career, 2012’s beautifully-crafted Old Ideas, which proved Cohen wasn’t just a nostalgia act touring the world crooning “Hallelujah,” the singer jumped back into the game last year, marking his 80th birthday with his 13th studio effort, Popular Problems.

In fairness, Cohen’s problems – whether rooted in love, faith or sex – have always proven popular when filtered through his raspy baritone. But on his new albums, he sounds more vibrant, confident, and, yes, even youthful, than he has in years.

In celebration of his 81st birthday, we take a look, in the graphic above, at Cohen’s studio discs by the decade.