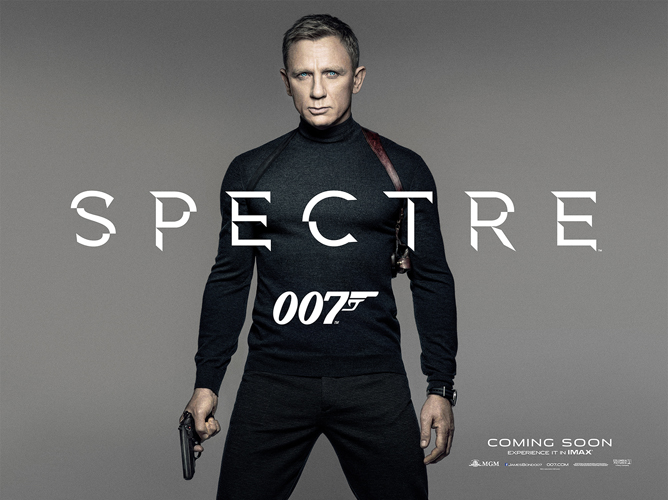 It’s not music to all 007 fans’ ears, but today marked the release the latest James Bond theme song, “Writing’s on the Wall,” for the upcoming Bond film Spectre.

Sam Smith, the 23-year-old Grammy-winning pop star who shot to international success on the back of his hit single, “Stay With Me,” last year, reportedly penned the lyrics to the tune in 20 minutes.

Upon first listen, “Writing’s on the Wall” – with its orchestration, falsetto and melancholy tone – doesn’t exactly evoke images of Bond’s debonair appeal or fabled heroics. Neither does it call to mind a dastardly villain’s plot or foreshadow any romantic trysts, both of which he’s sure to find himself entangled in.

When put against other famed Bond themes, from Shirley Bassey’s menacing “Goldfinger” to Tom Jones’ similarly orchestrated but packed with punch “Thunderball” to more pop-driven hits like Paul McCartney and Wings’ “Live and Let Die” and Duran Duran’s “A View to Kill” – both of which manage to stir tension between the catchy hooks – and the sentimental yet sophisticated “Nobody Does it Better,” by Carly Simon and Sheena Easton’s “For Your Eyes Only,” Smith’s tune falls flat, lacking in personality and opting for an orchestra and maudlin verses over personality and edge.

Of course, Smith’s song has the unenviable task of following Adele’s monster hit “Skyfall,” the theme to the 2012 Bond film of the same name which became the first 007 song to win the Oscar for Best Original Song. It also won a Golden Globe among other awards.

Reviews from fans and media have proved mixed.

SPINmagazine wrote wrote, “Sad to say, then, that it appears that Smith did not make a Bond theme with ‘Writing’s on the Wall’ — he made another Sam Smith song … It goes inexplicably meek on the chorus, as Smith wails in falsetto over lightly plinked piano and virtually nothing else. There’s no beat for the entire song … Whole thing’s kind of a drag, really.”

The BBC headline ran the headline, “Sam Smith’s Bond song ‘not a classic but good enough’” while also noting, “it’s the first Bond song to be recorded by a British male solo artist since Tom Jones’ ‘Thunderball’ in 1965.”

The Atlantic called it “radically wimpy” before writing, “The openly gay Smith taking it upon himself to inhabit arguably the most aggressively heterosexual hero that Western society has is radical enough; using that chance to imagine Bond ending his ‘lifetime running’ for gushy committed love can quite plausibly be seen as heretical. Or perhaps it’s a spoiler for Spectre’s plot, in which case the conversation over the newly openhearted James Bond has barely yet begun.”

Others called attention to similarities between this Bond theme and the Michael Jackson single “Earth Song.”

Still, to Smith’s credit, some fans and media love his take on the Bond theme and it did hit number one – with a bullet, you might say – on iTunes within hours of its release. Perhaps even more impressive, none other than James Bond himself – well, one of them at least – Sir Roger Moore tweeted, “@samsmithworld has delivered a very haunting and wonderfully orchestrated #spectre theme song. Well done!”

It’s tough to argue with that endorsement.

What do you think of the new James Bond theme, “Writing’s on the Wall”? Let us know in the comments below or on our Facebook page.