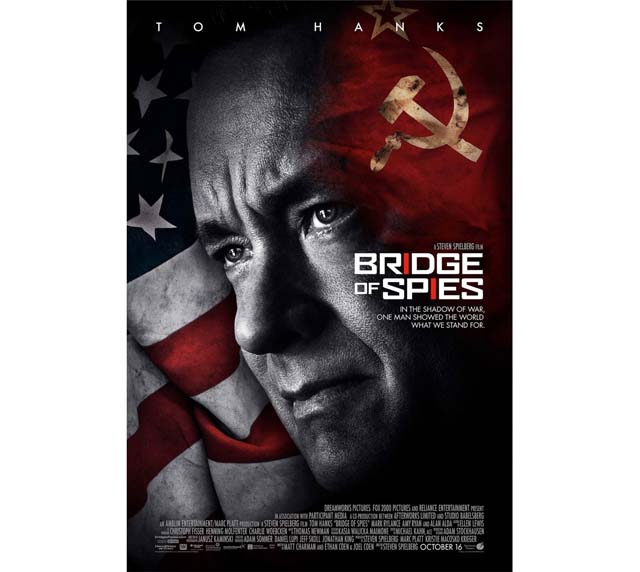 They may dress like Leave it To Beaver, but this goes far beyond Ward and June Cleaver’s capabilities.

Choice Quote: “The next mistake our countries make could be the last one”

Okay, 47 more words: Based on a true story, former Nuremberg prosecutor turned insurance lawyer James Donovan (Hanks) finds himself in the heat of a Cold War struggle between the U.S., the Soviet Union and Germany when he attempts to negotiate a prisoner exchange of Russian spy Rudolf Abel (Mark Rylance) for two captured Americans.

The Reality: A historical drama written by the Cohen Brothers (Fargo, The Big Lebowski, No Country for Old Men) and Matt Charman and driven by the Hanks/Spielberg combo may have viewers expecting a cross between Saving Private Ryan and O Brother, Where Art Thou?. Come to think of it, Oh Ryan, Where Art Thou? doesn’t sound too bad.

That, however, is not what we have here. Bridge of Spies is not as fast-paced as past Hanks/Spielberg films, nor is it as quirky as some of the best Cohen Brothers fare.

Perhaps having played out the Second World War – from Schindler’s List to Band of Brothers, Empire of the Sun and the aforementioned Saving Private Ryan – Spielberg jumps ahead a few years to the Cold War. There are fewer guns and more sitting around tables attempting to strike deals, but that’s not a knock on the film.

Bridge of Spies is a tense, stylized “talker” of a movie, but one that offers intriguing insight into the inner workings of the most covert international diplomacy.

To start, it’s the little things about the film to look out for – not plot spoilers but merely simple, specific touches Spielberg discussed in a post-screening interview. There’s the fact that when people answer the phone, they don’t say a word. They just listen. Silence, suspense. Or one of the opening scenes, where Rudolf is painting and all you hear in the background are the real sounds of New York bustling around him – the city’s symphony, as Spielberg noted.

Then there’s the complete 1950s motif. Think, “Leave It To Beaver Goes to War.” The clothing, the cars, the furniture and family dinners where hands are held and prayers recited. Morning commutes on the train where every fedora-sporting man and neatly dressed woman hunches over his or her morning paper, catching up on global events. It’s a world of international tensions and delicate diplomacy, of heroes at home and villains lying in wait across the ocean – oddly relatable, still, today.

Hanks, meanwhile, is completely believable as Donovan, a man so firm in his conviction that everyone deserves a proper defense that he takes up the cause of an accused Russian spy despite essentially becoming a pariah for doing so. Rylance is completely endearing – whether he’s supposed to be or not – as Abel, far more charming than one would think for the bad Russian spy. Amy Ryan does a fine job as Donovan’s wife and the supporting cast is solid but this film is really about the relationship between Donovan and Abel as well as Donovan and his own sense of what serving justice truly means.

It’s that courage of conviction that endures as he cautiously treads into the frigid, war-ravaged neighbourhoods of East Berlin, or the hostile Soviet empire, teetering ever so delicately on the brink of war with the west. Spielberg, meanwhile, moves the film along at a solid pace, never lingering too long in one place. Things happen fast. Decisions are made. Deals are struck. Deals are broken. They may dress like Leave it To Beaver, but this goes far beyond Ward and June Cleaver’s capabilities.

See it in theatres or on demand?: Theatres.

Bridge of Spies is in theatres now.