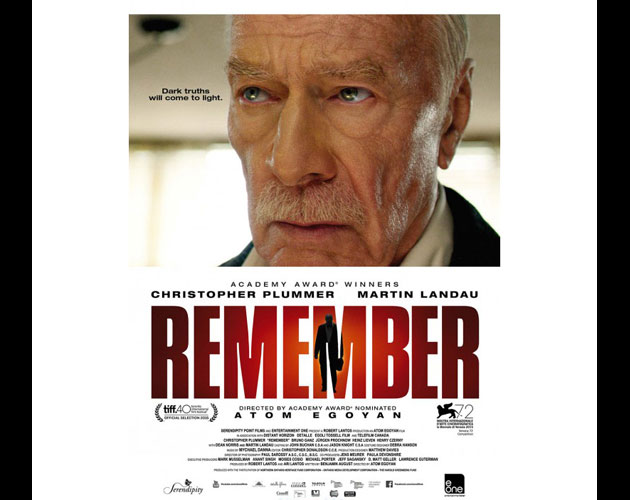 Between the Lines with … Plummer, Landau and Egoyan

A modern day thriller rooted in the Holocaust about a dementia-stricken widower’s search for the Nazi prison guard who murdered his family in Auschwitz – it’s this unique, somewhat unlikely premise, anchored by its star Christopher Plummer, that earned the film Remember a standing ovation at this year’s Venice Film Festival and gala honours at the Toronto International Film Festival.

And at the early morning media screening I attended in Toronto, not a person in attendance budged as the credits rolled, captivated by Plummer’s brilliant performance as well as by his co-star and fellow Oscar winner, Martin Landau, who plays the man who helps guide him on his quest for revenge.

MIKE CRISOLAGO: When you first read the Remember script, what was it that attracted you to the film?

CHRISTOPHER PLUMMER: First of all it was quite an interestingly written script. I thought, what a brave sort of thing for the author to write because it could be very boring, actually, if it’s done badly. And the part is so long – it’s wall to wall, actually, all the way – that one has to be terribly careful about making it at all … self-pitying. You don’t want any of that to go on. But I thought the challenge – I’ve never done anything like that before in my life. So I thought, why not? I found the story very gripping … and I needed somebody that I could trust as a friend so I asked Atom [Egoyan] to read it and he liked. If you have a very serious job like that to do you [call] Atom. I call him a good psychiatrist.

MARTIN LANDAU: Well, I liked the fact, of course, that it’s a serious look at a holocaust movie and … it’s a film that’s balanced well. So I also felt that Atom, being as talented as he is, and it’s a bit of a departure for him as well and working with Christopher, of course, is always fun because he’s such a good actor. And I knew that the other actors probably also would be carefully selected.

MC: Christopher, your role is quite interesting because it’s almost as if you’re playing two different men.

CP: Yes, yes, I felt I was two different men, actually. One that memory loss makes totally anonymous obviously. Horrible to look forward to that. And the other, sort of [a] terrible kind of revenge that stirs the blood and keeps you going whether you know who anybody is or not. [A] very uncertain man and to entrust him to do what he did was quite something.

MC: What was your experience working with a talent like Christopher Plummer?

ML: Well, you get truth, is what you get … There’s something about feeling that there’s a reservoir of understanding coming back at you. It’s like playing tennis with a great player; you don’t know where the ball is going to go until it lands and you’d better be there, so it raises your game a bit and that’s kind of a special thing. I mean, here’s a guy who can take a classical piece, he could play Richard III tomorrow and this character on the day after.

ATOM EGOYAN: There is this – there is something both reserved and empathetic about him. It’s a strange alchemy where he’s able to harness a certain aloof and slightly detached character with someone who’s completely empathetic and very charismatic. So, those are things that have evolved through his career but they’re very specific to him.

MC: Atom, what’s your take on Christopher’s performance in this film? He’s literally in pretty much every scene.

AE: I was just so proud of what Christopher [does] in this film. At the very beginning my hope was to put the camera in the right place, to capture what I thought to be a really important performance for him and I think what he does is just – it’s radical. To present the character that is so layered … to play all of that is really, really tough and Chris just nailed it.

MC: It’s fascinating because in reality, Christopher has those leading man good looks so you had to find a way to change his appearance, physically, for the film.

AE: I went to visit him at his house and we were trying to think about how his look should be because, you know, he’s so dapper. And he had just come out of the shower and his hair was slicked back and he sounded so vulnerable. And I went, “Chris that’s it, that’s how you have to look. Your hair has to look like that.” And it was his incredible moment and he looked at himself and said, “You’re right.” And it was suddenly I saw this other possibility. H embodied that by this very simple physical [change]. That was our starting point.

MC: Despite that character’s vulnerable appearance, his will remains firm. Martin, you noted that you go out of your way to avoid roles that would essentially see you playing stereotypical older people, like a grumpy old man.

ML: I don’t play “grunters.” A grunter is an old guy who sits at a table that the young people make fun of – this old grandpa that’s sitting there. And I get too many scripts like that and I just can’t do them, even if they were big pictures. [His Remember character] is an interesting character … and in this instance there were a lot of thoughts I had about how to play him. And Atom had a lot of thoughts about how to play him, and I talked to Atom quite a bit early on by telephone before we got together. And I love challenges. I can’t explain it, but there are too many things that had to go together and I love that and I like Atom’s work and I like the way he thinks and I like him.

MC: Do you look for certain types of roles while attempting to avoid stereotypes like that, Christopher?

CP: Yeah. I don’t think I’ve fallen into a rut yet. But I do – you’re absolutely right. I always look for the next role to be as different as possible from the one I just did.

MC: The film, of course, takes place in modern day but is driven by events that occurred during the Holocaust. How important is it to explore that subject in film today?

ML: The whole idea is to make people aware of the horror of war and the horror of … and the stupidity of some of the stuff we’ve done over the last number of centuries and are still doing. As you get older you begin to say, what’s the heck’s wrong with us? You know? You become impatient with the stupidity of the things that nations do and people suffer for.

AE: This is the last story we can tell with survivors. It seems to be like the last drama where you can see that this question of justice and retribution is still burning like a red-hot coal. And I think in [Martin Landau’s] character, he’s someone who has worked all his life at the Simon Wiesenthal Centre trying to do the right thing and, you know, realizes that’s not enough. So it is troubling to think that the film is saying that time doesn’t just heal, especially when it’s a survivor involved. Like someone who still lives it. I mean, I think there are exceptional human beings who are able to forgive and move on. But it’s amazing to understand that there are a lot who can’t. And that’s a very real sense of outrage and pain that they carry.

CP: It’s always important. You can’t do it enough. Most of the kids today haven’t a clue of what any of that is. So it’s important always to remind them. And you can say the Holocaust is overkill but it’s not – it can’t be. You can’t do it enough. And this is in a sense not a Holocaust picture. It was a new look, I thought, on the Holocaust problem. I was thrilled. I enjoyed it very much because it was fascinating.

Remember is in theatres today. And look for Christopher Plummer on the cover of the November 2015 issue of Zoomer magazine, available on newsstands now.