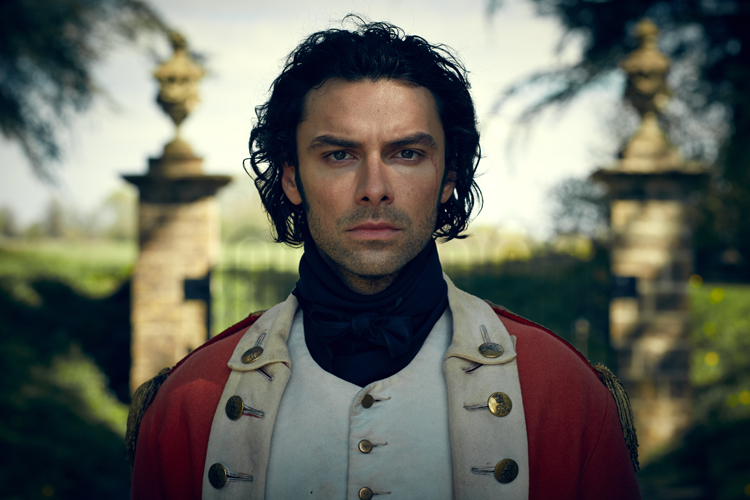 Well, Mr. Poldark, there’s good news and bad news. The bad news is that, though your efforts on behalf of the crown during the American Revolution are greatly appreciated, while you were off risking your neck your father’s life expired, your love, Elizabeth, left you for your cousin, and your grip on your family’s tin mines could prove tenuous. Oh, right, and your family’s estate is in shambles.

The good news, however, is that viewers have a lot of nice things to say about you and your new BBC series, Poldark. In particular, Vanity Fair, who are clearly fans of Aidan Turner, the ab-errific Irish actor who plays the title character.

“Turner – best known as the improbably hot dwarf who romanced Evangeline Lilly in The Hobbit – smolders,” the magazine raves,” the women in his life pine, and there’s enough intrigue, plot twists, and back stabs to hook even the most devoted Shonda Rhimes fan.”

The sentiment is a common one. At first, the bodice-ripper vibe is palpable thanks to Ross Poldark’s rebellious nature, sex appeal and endless abs – you know, if you like that sort of thing – but the series, based on author Winston Graham’s Poldark novels, quickly flexes its storytelling muscles. Set in the 18th century, the show follows Poldark as he attempts to piece together the shards of his former life.

“It’s the troubled hero who’s a bit of a rebel, he’s a bit reckless … fundamentally his heart is totally in the right place but he’s slightly damaged and conflicted and he’s torn between two women, two backgrounds,” series creator and writer Debbie Horsfield told John Van Driel in an interview with Zoomer Radio. “There’s a lot of great material in there.”

An update of the BBC series of the same name that aired exactly 40 years ago, Horsfield says the source material was “researched meticulously,” lending itself to an historically accurate adaptation that’s sure to make a tourist attraction out of the rolling Cornish landscapes where the show is filmed.

It’s no surprise, then, that this new series proved a hit across the pond, winning the UK TV Choice Award for Best New Drama and drawing comparisons to another beloved Brit show – Downton Abbey.

“Downton Abbey was a massive hit,” Horsfield said in the same interview, “and we’re very happy to be mentioned in the same breath.”

The series also made an impact here at home, where it airs on VisionTV (a ZoomerMedia property). While a second series is in production, you can catch up on every ab-flex, sultry gaze and storyline from the first one every Wednesday night, beginning Dec. 9 at 10pm on VisionTV.

Click here for photos, videos and more information on the first series of Poldark.