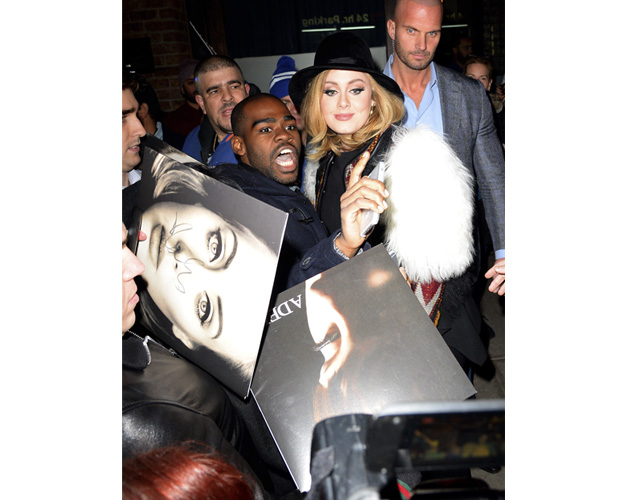 The gone too soon cross over R&B star Aaliya is perhaps best remembered for her 1994 hit “Age Ain’t Nothing But A Number,“ but today’s genre-bending pop phenomenon Adele, 27, has made age a signpost of her creative output and progress, posting chart topping units sold in numbers not seen since the pre-streaming, pre-downloading 90s.

Her three albums, 19, 21 and 25 have been critically acclaimed while smashing sales records, with 25, released just three weeks ago, selling over 5 million copies in the U.S.  Also, 25 is also the only album to sell 5 million copies in a calendar year since 2011 — when Adele’s previous album, 21, sold 5.82 million.

In another throw back move, most of the sales have come in the form of physical copies, as opposed to digital. (And her Live in New York concert special that aired on NBC this week had the highest rated audience for a concert in ten years. And yes, she’ll be coming to an arena near you in 2016.) Currently, only Taylor Swift can even approach these sales numbers, while with other popular acts, like Justin Beiber (who released his much anticipated “comeback” album, Purpose, in November, which charted at number two, behind 25), that is where the similarity ends. Adele is singular and it is her retro appeal that makes her so.

It all begins with the voice – a once in a generation force of nature and emotion that allows her the luxury of simply standing there and singing. Remember that? And what a novel concept in this time when the voice-correcting tool Auto-Tune is egregiously acceptable and where, more often then not, dancers and gimmicks, ahem J.Lo, are needed to fill the stage in lieu of the voice.

Speaking of which, Adele cuts an elegant figure on stage, not only for her classic fashion choices, which give her the iconic feminine silhouette that has held sway since the era of high style exhibited by the likes of Ella Fitzgerald and Billie Holiday, but because when Adele sings the blues she does so in beautiful dresses, impeccably fitted with nary a nip slip or a twerking bootie ahoy.

Refreshingly, and we’re looking at you Madonna, the only skin Adele shows is her face, its golden-age-screen star luminosity buoyed by clever hair and make up choices. Her trendsetting Bardot bouffant, Tayloresque cats eye, and Marilyn pink lip harkens back to a time of mystery and dignity, where despite what scandals roiled beneath, no star was ever seen without being groomed within an inch of their Q Score. This speaks to Adele’s smart control of her personal space and narrative. In this age of the insta(nt) culture, Adele pours her personal dramas into her music, not her social media feeds, which, refreshingly, she rarely engages with.

And when her duties are over, she melts back into her private life of a young British mother. In this age, where Kardashian levels of oversharing are the norm, it is little wonder that Adele leaves us wanting more.