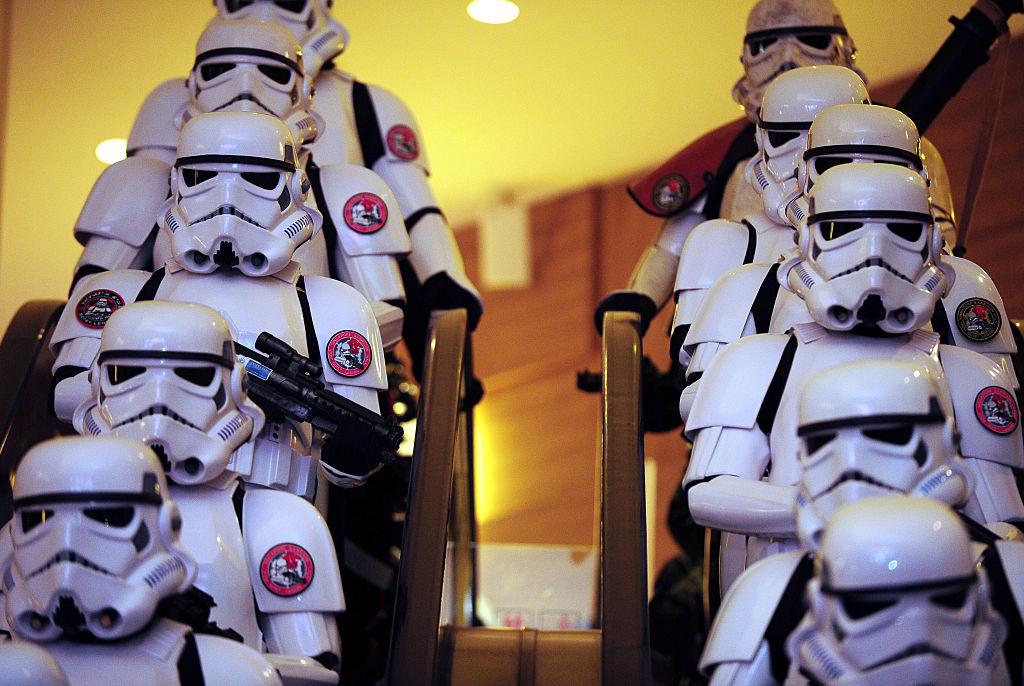 The Force is awakened indeed …

For super-fans of the Star Wars franchise, and I am one of them, fears can be squelched that Star Wars: The Force Awakens has any of the annoying, boring or all around cringe worthy bits that made the prequels (1999-2005) so unwatchable.

Instead, Episode VII is pure cinematic magic and at its heart, that will please fans old and new alike. Without delving into too much plot here, suffice to say that the dark side is back in all its evil glory as the First Order (the next generation of the Empire) and they and the Resistance (formerly the Rebel Alliance), are after the same thing: the missing Luke Skywalker. During a mission to secure a map to his whereabouts, hidden in the new and adorable droid, BB-8, an Imperial Stormtrooper (John Boyega) Finn, disgusted by the senseless murders of a group of villagers, defects with the help of a Resistance fight pilot Poe Dameron (Oscar Isaac). When they crash land on the desert planet Jakku, they are separated and Finn finds himself in the company of a scavenger, Rey (Daisy Ridley) who has come to have BB-8 as her companion. Hot on all their heels is the First Order’s Kylo Ren (Adam Driver), whose mask, cloak and mechanical voice makes it clear he wants to be the next Darth Vader.

One of the most highly anticipated films of all time and what is surely destined to be one of the biggest money-makers of all time, The Force Awakens came burdened with the enormous task of pleasing zealous fans who revere Stars Wars with religious fervor while at the same time injecting a fresh approach on the material. The story itself, it must be said, is light on complexity and perhaps treads too closely to the originals, despite this, I can’t even call it a flaw, the filmmaker’s task is more than ably met.

A feat no doubt helped by the inclusion of the original trilogy’s most beloved characters. When Han Solo (Harrison Ford) first appears, with thirty-years of weathered and soulful living behind him, even the most cynical fan will cheer and weep at the same time. When asked if he really is Han Solo, his response, “I used to be,” says it all. The wondrous expressions of the young new characters Rey (Daisy Ridley) and Finn (John Boyega) at seeing the mythical character in the flesh must surely have been real on the parts of the actors sharing the screen with Ford in one of his most iconic roles.

The most moving scenes however, are between Solo and Leia (now a Resistance General), whose banter has softened over the years but an underlying love and tenderness remains. And fans will rejoice in seeing Chewbacca (Peter Mayhew), C-3P0 (Anthony Daniels), R2D2 and Admiral Ackbar on screen once again.

The film however, belongs to Ridley’s Rey. She is a heroine for the ages, and would be as at home fighting alongside Katniss Everdeen in the Hunger Games as she is going mano-o-mano against Stormtroopers. And anyone who had doubts that Driver, whose turns in Girls and other indie flicks make him a hipster favorite, could pull off such a major role can breathe a sigh of relief. He is masterful as Ren, a conflicted and tortured young man who is determined to be a slave to the dark side.

Director J.J. Abrams must be a humble man to have so capably assumed the reins of both Star Trek and Star Wars. I say humble because he has taken such gentle care and reverence to preserve all that was so compelling and loved in the original Star Wars trilogy, that the classic director’s ego that drives so many productions, seems to have been in check in order to pull off such an achievement. He and producer Kathleen Kennedy also hired Lawrence Kasdan (co-writer of The Empire Strikes Back, Return of the Jedi and Raiders of the Lost Ark) to co-write alongside him and Michael Arndt. Kasdan knows the characters and their world so well that the divide between the generations is seamless. Overall, given the monster task bestowed on Abrams and his team -– the balance is struck ably.

If The Force Awakens were a meal, it was prepared with love by the capable hands of your mother and grandmother, not a fast-food joint in sight. This may well be the best film of 2015 and I wouldn’t be surprised to see the film come Oscar time.

We were waiting to see what the new Prime Minister has to say about the film, and if he’ll enjoy it as much as he liked The Empire Strikes Back!

And here’s what he had to say!

Just saw #TheForceAwakens with friends from the Children’s Hospital of Eastern Ontario. Spoiler: It was amazing! pic.twitter.com/HVvdVDesfA