Rocky, The Oldest Winner Ever and the Best Boomer Golden Globe Moments 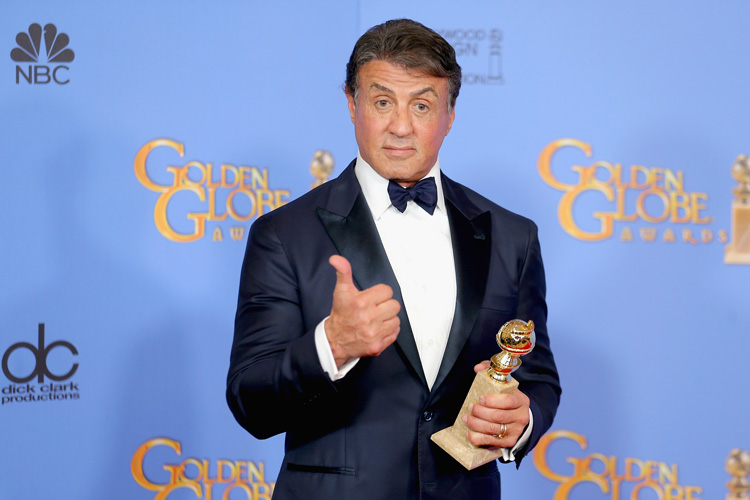 The champagne flowed, gold statues changed hands and host Ricky Gervais either cracked you up or had you rolling your eyes in frustration – that’s the jumping off point for the 2016 Golden Globes award ceremony.

Gervais, as host, simply played up the disgruntled, “what will he say next?” character he’s crafted over his last three stints helming the Golden Globes – a performance that essentially relies on making unfunny transgender jokes, telling the winners that the awards don’t matter (he has a point there) and tossing insults like “you disgusting, pill-popping sexual deviants” at the star-studded audience. He capped his evening with a very awkward encounter with Mel Gibson that included Gervais repeatedly referencing Gibson’s past anti-Semitic remarks and Gibson replying with “I’ll put you to sleep another way, you son of a bitch.” Is it too soon to bring Tina and Amy back?

Once Gervais got out of the way, some high-profile boomers stole the Golden Globe spotlight. From Ennio Morricone’s record-setting win to Taraji P. Henson’s line of the night, read on for our top five Golden Globes boomer moments…

The Italian composer, conductor and musician’s various film scores are some of the best-selling in music history and he’s won or been nominated for almost every major award you can imagine. The roster of directors whose films he’s scored is equally as impressive: Sergio Leone (The Good, The Bad and the Ugly and Once Upon a Time in the West, among others), John Carpenter (The Thing), Brian De Palma (The Untouchables and Mission to Mars), Barry Levinson (Bugsy and Disclosure), Oliver Stone (U Turn), Roland Joffé (The Mission), Warren Beatty (Bulworth), Terrence Malick (Days of Heaven), Bernardo Bertolucci (Novecento, among others) and Quentin Tarantino (The Hateful Eight, among others).

Last night, Morricone added another accolade to his storied career. Not only did the 87-year-old win his third Golden Globe for Best Original Score but, in doing so, he became the oldest Golden Globe winner ever, surpassing Jessica Tandy, who won Best Actress honours in 1990 for Driving Miss Daisy at age 80. In accepting for Morricone, Tarantino called him his favourite composer of music.

Though he didn’t scream for Adrian after his win, the Rocky theme blared as Sylvester Stallone, 69, took to the stage to accept the first Golden Globe of his career. The award, Best Supporting Actor for reprising the character of Rocky Balboa in the film Creed, comes 40 years after the release of the original Rocky film.

After receiving a standing ovation, Stallone called himself “the sum” of everyone he’s ever worked with and finished his acceptance speech with a very special thank you. “And most of all, I want to thank my imaginary friend Rocky Balboa for being the best friend I ever had.”

Taraji P. Henson handed out cookies as she made her way to the stage to accept her award for Best Performance by an Actress in a Television Series, Drama – a symbolic celebration of the character, Cookie Lyon, on the hit TV series Empire.

Henson, 45, mused that she was surprised that of all the characters she’s played in her career – from her Oscar-nominated role, Queenie, in The Curious Case of Benjamin Button to her turn in the 2010 remake of The Karate Kid – it was Cookie that landed her on the Golden Globes stage. And when she got the cue to finish up, she uttered the line of the night: “Please wrap? Wait a minute. I waited 20 years for this. You’re gonna wait.” And then she continued her speech over the chorus of the orchestra attempting to wrap her up. Perfect.

Denzel Washington received the Cecil B. DeMille Award this year, and there are few more deserving recipients than the 61-year-old actor. A five-time Oscar nominee and two-time winner (Best Supporting Actor, Glory, and Best Actor, Training Day), two-time Golden Globe winner (Glory and Best Actor, Drama for Flight) and Tony winner (Best Actor in a Play, Fences), Washington was introduced by Tom Hanks and took the stage with his family by his side. He delivered a short and heartfelt acceptance speech, joking as he stumbled at points because he couldn’t read his notes since he forgot his reading glasses.

If you didn’t love him enough already for his film work, his humility and sincerity shone proved a highlight during a night when Tinseltown heavyweights get drunk and hand out awards to each other.

Lowering the Boom(ers) on the Golden Globes

Though not all the 45-plus nominees took home statuettes this evening, a number of boomer winners graced the stage. In addition to those mentioned above, the winners included:

Maura Tierney, 50: Best Performance by an Actress in a Supporting Role in a Series, Limited Series or Motion Picture Made for Television, The Affair

Christian Slater, 46: Best Performance by an Actor in a Supporting Role in a Series, Limited Series or Motion Picture Made for Television, Mr. Robot

Matt Damon, 45: Best Performance by an Actor in a Motion Picture – Musical or Comedy, The Martian

Honourable Mention: Inside Out, which won the Golden Globe for Best Motion Picture, Animated, though in reality it was one of the best overall films of 2015. If you haven’t seen it yet, no need to wait to watch it with the grandkids. Though it’s a Pixar film, it’s a brilliant, heartwarming and hilarious film that you will love. Take it from me – I gave it one of the best reviews of all the films I saw this year.