Helping Haiti: The Scent of Change 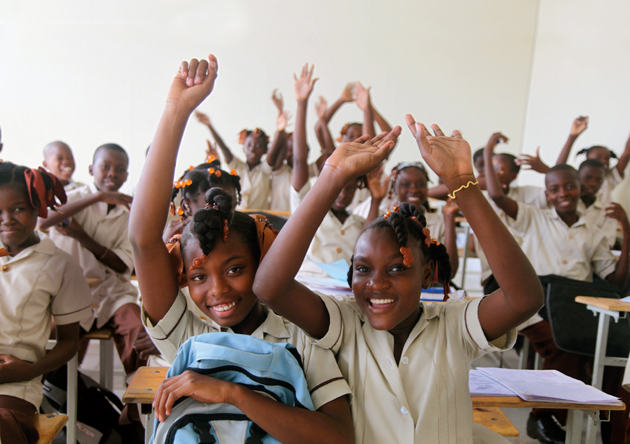 Here, harnessing the power of Hollywood and fragrance for the good of Haiti.

It was 2008, and filmmaker Paul Haggis had read about a Roman Catholic priest in Haiti named Father Rick Frechette and was so impressed with his work he flew out to the island country in search of him.

Haggis, a Canadian, is perhaps best known for his Oscar-nominated screenplay for Million Dollar Baby and his three-time Oscar-winning film Crash, which netted him gold statuettes for best original screenplay and best picture.

Father Rick is an American doctor and priest who has been working in the slums of Port-au-Prince for more than two decades. He and his Haitian team run the St. Luke Foundation and have built orphanages, medical clinics, a network of more than 30 primary schools and a pediatric hospital that is the only free high-level pediatric hospital serving the children of one of the largest slums in the Western Hemisphere.

And he desperately needed support.

“I brought him to Los Angeles to meet some of my Hollywood friends, and the man has been in Haiti for 25 years, so he doesn’t watch television, doesn’t watch movies. So he said to me at one point, ‘The very beautiful blond woman across the table – is it Charlize Theron?’ I said, ‘Yes.’ ‘What does she do?’ ‘Oh, she’s an actress,’” Haggis laughs. “And so, he went all the way around the table – he didn’t recognize anybody except for Barbra Streisand.”

During his first trip to Haiti, Haggis also met David Belle, an American documentary filmmaker whose work earned him a Pulitzer Prize for broadcast journalism. In 2004, Belle co-founded Haiti’s International Film Festival in the coastal town of Jacmel as a way of supporting the country’s creative and tourism industries. He then founded Haiti’s national film school, Ciné Institute, to educate young local filmmakers.

“David quickly became my second hero down there because he’d been working there for so long and had been so effective as well in a totally different area,” Haggis explains. “Between these two men, I figured I couldn’t turn away. I was just so inspired about what both of them were doing, and they both needed a tremendous amount of help. And so, we started Artists for Peace and Justice (APJ).” Haggis adds jokingly that he “conned” Belle into being APJ’s full-time chairman and CEO.

Haggis knew he needed help to raise awareness, and he brought in Natasha Koifman, president of NKPR, a Toronto-based communications agency with offices in New York, whom he met at the Toronto International Film Festival (TIFF) in 2008 and who would become chair in Canada for APJ. Given their contacts, they decided to raise money with a high-profile celebrity gala at TIFF in 2009.

At this first event, Koifman was struck by how little people knew about Haiti. “People on the red carpet didn’t know where the country was. Some even asked if it was in Africa,” she says. “Then six months later, the earthquake hit, and everybody knew where Haiti was.”

On Jan. 12, 2010, when a 7.0 magnitude earthquake struck near Port-au-Prince, the result was catastrophic.

More than 200,000 people died, 300,000-plus were injured and the devastation to the country’s infrastructure was beyond imaginable. (Natural disasters are not new to Haiti. Major earthquakes destroyed early colonial settlements in Port-au-Prince in 1751 and 1770.) Then in October 2010, a cholera outbreak took nearly 8,000 lives and infected more than 735,000. To call the country beleaguered is a gross understatement.

Those familiar with Haiti know that the country has a history of European colonialism, slavery and political instability. A slave rebellion in 1791 led by Toussaint-Louverture and backed by a Vodou priest resulted in the French government granting the slaves freedom.

But it wasn’t until 1804 that Haiti became an independent republic – making it the oldest black republic in the West – enduring more than a hundred years of turmoil before coming under American occupation in 1915. Once the United States pulled out in 1934, the country was led by a series of ruthless dictators including François (Papa Doc) Duvalier and his son, Jean-Claude (Baby Doc) Duvalier, the latter eventually going into exile in 1986.

Then came Jean-Bertrand Aristide who led the country on three separate occasions between military rule only to lose to René Préval who was president before and after the 2004 coup d’état. In 2011, Michel Martelly was elected president, but in an election held this past October, no candidate received the majority of the vote. A runoff presidential election will be held Dec. 27, 2015.

All of this political strife has made any truly unified and cohesive humanitarian efforts nearly impossible. But when the earthquake hit in 2010, Father Rick told Haggis that what was needed most was relief money. Haggis arrived at the L.A. airport with $50,000 in a duffle bag. He got as far as Miami. No flights were going into Port-au-Prince. But Sean Penn picked him up in his private plane, and Haggis got the money to Father Rick within 48 hours.

The photographs and videos that were splashed across the various news outlets made it clear: Haiti was a land in crisis. But once the immediate needs of earthquake relief were met, the board of APJ had decisions to make. “I learned that if you were a child of the slums, you could go to Grade 6, and that was it. You were on the streets,” Haggis explains. “There were high schools, but they were high schools with children of the middle class and the rich. We thought that a crime.”

“It was education that made sense because how do you effect change?” adds Koifman. “You want to empower Haitians to help Haitians. And it is a challenged government. So we worked with Father Rick. Bought the land. Built the school. We had 400 students the very first year.”

The school – the Academy for Peace and Justice – is the first secondary school for the very poor in Port-au-Prince and has 2,800 students this year and is now at full capacity. APJ also helps fund the Artists Institute in Jacmel and St. Luke’s Hospital. With all this in place, the goal for APJ is longevity.

“We have to make sure these are sustainable and that they are there a long time,” explains Haggis. “The problem with Haiti is the same problem with aid everywhere. If there’s a disaster, the people running it, they help for a while and they’re very sincere, but it soon becomes unsexy, and they move on to the next thing. We decided from the beginning we’re there for the long term to build long-term institutions that would serve the people and actually make a real difference, not just patched up.”

This kind of commitment requires dedication and money. Fundraising can be a tricky business, especially in these trying times with so many worthy causes vying for our attention and dollars.

The main annual event for APJ Canada is its star-studded gala at TIFF. This past September, Helen Mirren presented founding APJ board member Susan Sarandon with the inaugural Artist for Peace and Justice Award. Other board members in attendance included Jane Fonda and George Stroumboulopoulos.

APJ has raised more than $20 million since its first effort in 2009. But as a fundraiser, Koifman has to get creative so, launched in time for the holiday season is the limited edition fragrance Twentysix, benefiting APJ. The idea came to Koifman one morning at home.

“I was spraying myself with five different perfumes [her daily routine to get the perfect scent] and I thought, why not do a fragrance? And I learned about Aromachology,” she explains. “And I thought they’re cool. They’re Canadian. And we did it.”

Ashlee Firsten is co-founder of Aromachology, whose concept of customized scents and perfume bars have made it a hit with women in North America. Both Koifman and Firsten felt it was imperative that one of the ingredients for Twentysix come from Haiti, and the obvious choice was vetiver, a root and grass used in several perfumes on the market.

But choosing the ingredients tells only one part of the journey. “I said to Natasha, ‘When you talk about Haiti, you talk about chaos. So the story of Twentysix is a story of chaos and how beauty can come out of it. And there still is opportunity. And something can grow from it.”

To that end, the base notes are heavy with Australian sandalwood, patchouli and Haitian vetiver. Then, as Firsten explains, the goal was to rise up from this heavy base to lighter notes of tea rose and jasmine.

“A little bit more feminine,” she says. A hint of grapefruit and bergamot top notes help to reveal those lighter florals and, as Firsten says, “I want to make the sun shine. I want the sky to open and let something good happen.”

Why the number 26? Koifman says it’s her lucky number. Her son was born on June 26, and many great things have happened to her on the 26th, so much so she has the saying, “Gratitude to the power of 26” tattooed on her arm.

“It’s a constant reminder that I’m really lucky and should do something to give back.”

Twentysix is available at Hudson’s Bay and online at thebay.com and myaromachology.com until the end of February. A percentage of the profits go to APJ.