Kanye West vs. Bob Ezrin, or “How to Throw a Tantrum in 14 Simple Tweets” 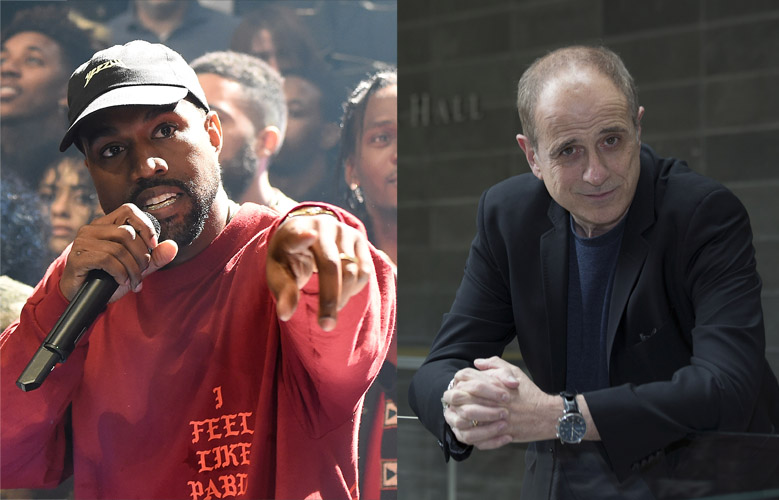 Kanye West has fought his share of battles in his time, be it against fellow artists, or critics, or reality. The rapper’s latest salvo, however, came last night around 11:40 p.m. when he tweeted “Has anybody ever heard of Bob Ezrin???” — the first in a series of tweets attempting to take down the legendary Canadian music producer by insulting his work, his opinions and even his family.

West cited the 66-year-old as an example of “everything that is wrong with the old guard” that, in turn, makes him “tired of old people that have no connection with anything trying to comment on music!”

Kanye’s social media hissy fit comes on the heels of an open letter Ezrin posted online in which he writes, “What [Kanye] is a true artist at is living his life out loud – and shoving it down the throats of the rest of us whether we give a shit or not. He’s like that flasher who interrupts a critical game by running naked across the field. Is that art??? … What galls me the most though is the thought that he and others – especially the media – might actually BELIEVE that he’s an artist. With a capital “A.” That what he’s doing is of any real consequence besides for the sheer train wreck gawker value of it.”

Ezrin even went so far as to say, “Kanye’s greatest achievements have been in the form of excessive behavior, egomaniacal tantrums and tasteless grandstanding.”

And so Kanye responded in the only way he knows how – with excessive behavior, an egomaniacal tantrum and tasteless grandstanding. The irony that Kanye West – who has a mouth like a foghorn when it comes to yapping on about how great an artist he is, regardless of whether anyone cares to listen – is tired of hearing someone else talk about Kanye West, is funny enough. But the fact that he blew his stack over Ezrin’s criticism on the heels of the announcement that he’s $53 million in personal debt, followed by a personal request that billionaires like Facebook founder Mark Zuckerberg and Google’s Larry Page bankroll his artistic pursuits, a demand that “white publications” stop writing about black music and a renewal of his feud with Taylor Swift means that this is all just part of one very loud, very sad temper tantrum.

Even Late Show host Stephen Colbert had a field day the other night mocking Kanye’s antics, though it seems the rapper has no interest in getting into a social media battle with a comedian who could skewer him in 140 characters or less.

And yet, when you get down to it, this isn’t a laughing matter. Kanye is a grown man, an exceedingly talented rapper, a role model to millions and someone who is clearly dealing with some very serious personal issues. He needs help, and reports are his wife Kim Kardashian and her family may agree. And we, along with all of his fans and loved ones, hope he gets it.

In the meantime, to answer Kanye’s initial query about who’s heard of Bob Ezrin, we’re guessing everyone from artists like Pink Floyd, Jay-Z, Alice Cooper, Peter Gabriel, U2 and Lou Reed have all heard of him, given they’re just a handful of the music legends he’s worked with over the years. Then there are all the people who’ve bestowed awards on him. They’ve clearly heard of him.

Oh, and don’t forget all those involved with, and affected by, the numerous charitable foundations that Ezrin takes part in, from victims of natural disasters to underprivileged children across North America who receive musical instruments through the various causes he champions. They’ve certainly heard of him.

Come to think of it, Kanye should have done his research before attacking Ezrin. Surely there’s a charity the producer’s involved with that could have taken care of the rapper’s $53 million debt. Perhaps he could even throw together an event to help recoup Kanye’s fortune. “Cash for Kanye” Telethon anyone?