Between the Lines … with Peter Mansbridge 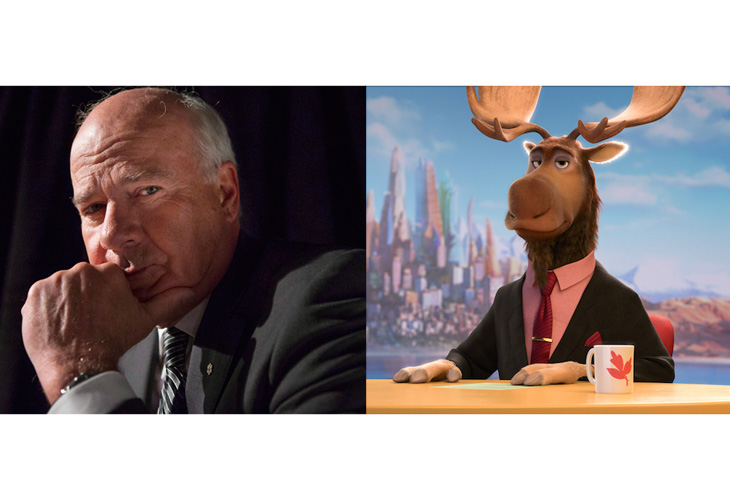 Every Canadian who’s ever watched a breaking news event unfold knows the voice – deep, authoritative, dependable, honest. It’s part of what makes Peter Mansbridge the preeminent news anchor in the country. It’s also what makes it so strange to hear that booming, authoritative voice coming out of a moose.

Recently Mansbridge took leave of his duties at CBC to fill in at the anchor desk in Zootopia, a world of anamorphic critters brought to life by the magic of Disney in their latest film Zootopia. Here, Mansbridge becomes Peter Moosebridge, local anchorman reporting on all of the events and, ahem, monkey business, in the animal metropolis.

I recently sat down with Peter Mansbridge to discuss Peter Moosebridge and how Canada’s most famous working journalist wound up in a Disney movie.

MIKE CRISOLAGO: Being Canadian and familiar with your work as a newscaster, it’s a little surreal when Peter Moosebridge comes onto the screen. It’s the same tone and delivery we’re used to hearing from you when reporting on something like ISIS but, instead, you’re discussing the news in Zootopia.

PETER MANSBRIDGE: [Laughs] Which is what they wanted, right? They said, we want you to be you in this. Don’t try to pretend you’re a moose. Just be you. We want that voice for this role. And so from that sense it was easy, right? I mean, it was a totally different experience for me, which applied different nervous energies to me while I was doing it, but at the end it was what I do.

MC: How did you end up getting involved in a Disney movie in the first place?

PM: I didn’t even know about Zootopia. It was early last summer, I was on my way to catch a flight at Pearson. I was going through security and this fella was behind me and he said, “Hey, you’re Peter Mansbridge.” And I said, “Yeah.” And he said, “I’m with Disney and we were just talking about you because we’d love your voice for this newscaster role in the new animated feature we’ve got coming up called Zootopia.” And I’m thinking, “This guy is nuts.” [Laughs] And everybody was in a hurry so we exchanged cards and then I ended up getting an email with an outline of exactly what he was talking about … That started the ball rolling. And then I had to deal with the CBC as to whether or not this was a problem. And after a little bit of back and forth we did it.

MC: It really mirrors the beginning of your career, when you were discovered working in an airport by a radio executive who recruited you into journalism.

PM: [Laughs] Yes, it does. Another airport story. It is funny – I’ve always loved airports and I’m in them a lot. But still, it is a bit odd.

MC: They seem to work out well for you. When you go to the airport now you must wonder what job offers are going to pop up.

PM: That’s right. [Laughs] When I go and speak at journalism schools I say, “You know, you’re wasting your time here. Just go to the airport.”

MC: Did you know, when you took the role, that you’d be playing a moose?

PM: It certainly was [known] by the time we got into a real discussion about it. Traditionally we’d assume, if they wanted a Canadian animal they were going to say the beaver. But the moose is a pretty special animal … and I thought that was good – especially for the role of a newscaster. They claim that they kind of visualized some of the features of this moose based on my features but I don’t quite see that. It seems to have a lot more hair than I have. Other than that it was fun.

MC: And for moviegoers who know you, the fact that you’re portrayed by an animal so associated with Canada is like a little nod to our country.

PM: Yeah, I think you’ll be able to tell because the voice is distinctive, so in Canadian audiences I assume there will be a certain reaction. But what’ll be neat is if you watch it in the States you’ll immediately know how many Canadians there are in the audience when it comes on because they’ll recognize it.

MC: In your full-time job you’re given a script and you read the news. Here, you essentially did the same thing but it was fictional news about a fictional world for a movie. Did that present a different challenge than your day-to-day job?

PM: On the one hand, it is what I do. But at the same time it’s very different because you’re dealing with fiction as opposed to fact. I knew when I was doing this that this was for a feature film and it was Disney and there was all the excitement surrounding that involved. So it never felt like I was doing the news. It felt like I was doing something for what hopefully will be seen by hundreds of millions of people for many years into the future. I think they’ve got a classic here …

Obviously that’s the hope, that it becomes that. So many Disney films are classic films. I still remember the first animated features that I saw – Bambi and films like that – and what they meant to me. And hopefully Zootopia joins that list of ones that people will remember and will go from generation to generation.

MC: That must exciting to think that you might live on for decades in this film and be unlocked from the Disney vault in 50 years.

PM: It is. In some ways a lot of the news stuff – especially in Canada – will be unlocked for decades to come. But this is pretty neat because it means that not only my grandchildren but my great-grandchildren and my great-great-grandchildren will always be able to say, “Hey, look at that. That’s one of those Mansbridge’s who was here before us.”

MC: Absolutely. Now, if you take the grandchildren to Disney World, do you get in for free?

PM: [Laughs] I don’t think so. Unless I wear moose antlers or something.

MC: Could you see yourself taking other acting roles in the future?

PM: Probably not. It was fun and it was a great experience but I think I’ll leave the acting in our family to my wife [actress Cynthia Dale].

MC: Although, who knows what opportunities will arise the next time you go to the airport?

Zootopia is in theatres on Friday, March 4. For our Zootopia movie review, click here.