Theatre Review: You Won’t Forget “You Will Remember Me” 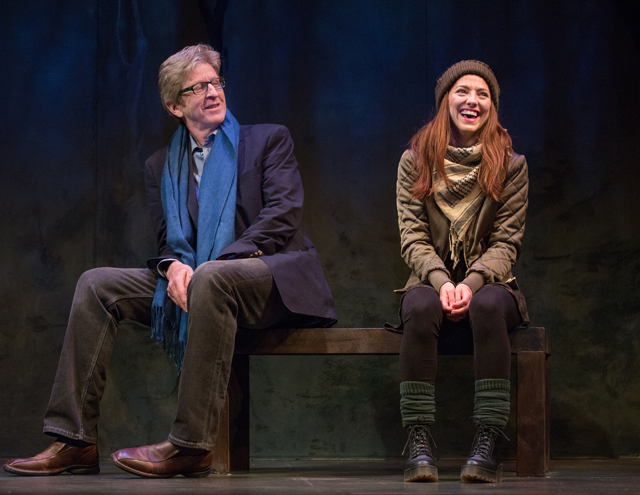 R.H. Thomson and Michela-Cannon in "You Will Remember Me." Photo by Cylla von Tiedemann.

There’s a touching scene in You Will Remember Me, Governor General’s Award-winning Quebec scribe François Archambault’s poignant play about a family patriarch’s descent into dementia, in which the father, Edouard, and his daughter, Isabel, share a dance in the living room of her home. It’s not a plot-altering act or even a lengthy sequence but, for as long as it lasts, the viewer almost entirely forgets that this man is slowly losing his grasp on reality. In that moment Edouard is Edouard, and he’s happy. And Isabel is happy. And it makes sense, in hindsight, why Canadian theatre legend R.H. Thomson, who plays Edouard in the new Toronto production of the show, posits that this play isn’t about dementia at all.

“I think this is a play about identity,” the 68-year-old told me during a break from rehearsal of the Tarragon Theatre/Studio 180 production last week. “It’s really a play about the journey into identity and who actually are you? Are you the collection, only, of your memories? Or is there an essence in you that goes beyond your memories and your past accumulation of data, so to speak? And the play asks that question quite profoundly. Same as Hamlet saying ‘To be or not to be.’ Sometimes I say [this play is] the ‘To be or not to be’ soliloquy delivered by the five people in the cast.”

Thomson’s assessment is bang on. At times funny and others heartbreakingly raw, You Will Remember Me is a moving piece that not only explores Edouard’s desperate struggle to maintain a semblance of stability and identity as he slowly slips away, but also the family’s struggle as they confront their new reality. It’s a must-see for anyone who’s ever been touched by dementia in a loved one, or who yearns for an unapologetically honest dialogue about the challenges those who face it endure.

Thomson, as Edouard, is a charismatic former university professor with an almost encyclopaedic knowledge of history who can’t recall the name of the person he met five minutes earlier. At first he seems as though he’s not doing too badly, until his wife, Madeleine (played by the brilliant Nancy Palk), pulls back the veneer of their life to reveal just how fast Edouard is fading.

Desperate for help, Madeleine enlists her journalist daughter Isabel (Kimwun Perehinec) and her new partner Patrick (Mark McGrinder) to care for Edouard for a few days. Patrick, in turn, calls on support from his daughter, Berenice (Michela Cannon), a 20-year-old firecracker who resents Edouard at first but who eventually proves an emotional rock that he relies on. The stakes are raised when a dark secret is stirred from the muck of Edouard’s memories, forcing the entire family to confront both their collective past and their individual futures.

This play is only 90 minutes but it doesn’t waste a second getting to the core of this family’s struggles. The performances from the cast are superb and the staging is simple but wholly effective. And, most importantly, this is far from a maudlin display of the effects of dementia. In fact, there are plenty of laughs and light-hearted moments to cut the tension and ease the audience through the subject matter.

Perhaps that’s surprising given the subject matter. But, as Thomson noted, You Will Remember Me isn’t a play about dementia.

You Will Remember Me is playing at Tarragon Theatre’s main space until April 10. Click here for more information and tickets.