Between the Lines … with Margo Martindale 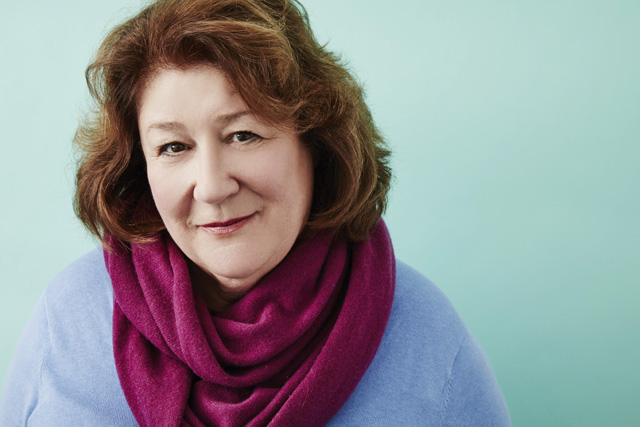 Margo Martindale has a brilliant laugh – genuine, hearty and big, which isn’t surprising given the 64-year-old was born and raised in Texas, where everything is bigger.

Still, for fans who know her from dramatic TV turns as crime boss Mags Bennett on Justified (for which she won an Emmy) or KGB handler Claudia on The Americans (for which she won another Emmy), or for her role as Meryl Streep’s sister Mattie Fae in the film August: Osage County, the image of Martindale as a light-hearted, sincere, joyous woman will seem a bit foreign.

If anything, that’s a testament to her range, for which the Hollywood Reporter dubbed her “that miracle of an actress.” The juiciest roles of her career have all come post-age 55 and Martindale has proven she’s as great playing characters with questionable morals as she is in comedic parts, like her starring role on the CBS comedy The Millers, guest spots on the animated comedy BoJack Horseman and her latest role, as a stuffy Texan mom in the star-studded big screen ensemble Mother’s Day.

Directed by Gary Marshall and following in the tradition of his past films Valentine’s Day and New Year’s Eve, Mother’s Day follows multiple storylines involving different families leading up to mom’s big day. As for the cast, Martindale is in good company alongside Julia Roberts, Jennifer Aniston, Jason Sudeikis, Timothy Olyphant and Kate Hudson, who presented her with a homemade Emmy Award on set (more on that below).

MIKE CRISOLAGO: Tell me, first, what drew you to this role in Mother’s Day?

MARGO MARTINDALE: To get to work with Gary Marshall … I’m such an admirer of his. He really knows what he’s doing. There was one time when we were [filming] and one of my reactions was so huge, I said, “We need to fix that.” Gary said, “Yeah, it looked like you were doing something from a 50s sitcom.” [Laughs] He really made me laugh.

MC: More and more films, including Mother’s Day, depict older characters struggling to come to grips with major societal changes, such as same sex marriage. Do you see the characters that you and Robert Pine play as symbolic of the idea that it’s never to late to change?

MM: Yes, you put that beautifully. I think that’s exactly what these two characters are about. I don’t know that my [movie] husband makes the turn but I do.

MC: It’s strange to actually speak the prejudiced things the characters are scripted to say, isn’t it?

MC: Your storyline in the film saw you working with an ensemble led by Kate Hudson…

MM: She’s a doll. During the shooting of [Mother’s Day] I won an Emmy for The Americans and … I wasn’t able to go, which was horrible. But Kate made a little Emmy right there and presented it in front of everybody on the set. Just so thoughtful and sweet. She’s a caring girl. And fun. Lots of fun. It was very kind because I was a little bit upset. [Laughs]

MC: And speaking of the Emmys, you’ve received some of the best roles of your career in recent years.

MM: I think the work that I’ve been doing as I’ve gotten older has been much richer. It was hard when I was younger because I kind of had to be pigeonholed. I did comedy, mostly, on stage … I sort of went the Southern route and finally, honestly, in the last five years, people have actually seen that I can act. [Laughs] I don’t have to be always a Texan. But, of course, I will whore myself out when I have to. [Laughs]

MC: When you look at even your most recent work, from Mother’s Day to The Americans to Justified to The Millers to Bojack Horseman to August: Osage County, the roles are so varied. Do you actively seek out such different parts?

MM: I do try. My agent and I talk about it. “Oh, well we’ve already done a Southern movie this year. Let’s not do another one.” I try to do that because lots of Southern movies are offered to me and if it’s a part that I’ve played before I usually say no – unless it’s something exquisite. I try to do that. Sometimes, when you want money, you do whatever you need to do. [Laugh]

MC: Your career is bustling right now. What advice could you offer people in middle age and older about staying vibrant and active?

MM: I think sleep is big. I sleep eight hours, at least, a night. And I love sleeping. [Laughs] Until The Millers was over I was on the elliptical everyday. And since then I haven’t been on it. I think it’s over a year now. I’ve got to get back to that. Keep your blood going.

MC: Finally, what roles or professional challenges do you still look forward to pursuing?

MM: I really want to do an English character. I’d love that to come along. I thought it was going to come along and I worked so hard on it and then they gave it to somebody English. [Laughs] Smart move … I love acting so much. It’s just a joy.

Mother’s Day is in theatres today.